Magnetism is mysterious. In physics, electromagnetism is one of four basic forces driving the entire universe, alongside gravity and two types of nuclear interactions within atoms. Only the brainiest of the brainy have any idea how it all works, and even they find room for debate. 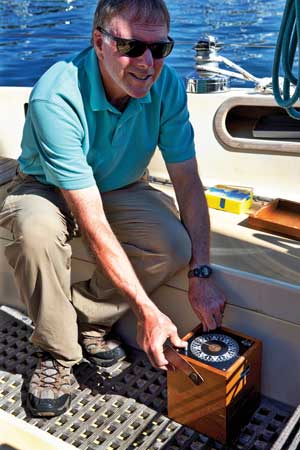 “Actually, I inherited this business from my father,” Witherill said calmly as we headed out to Thunderhead, a magnificent old 49-foot wooden sloop on a mooring in Rockport Harbor. “And these days,” he admitted, “there’s not much call for a compass adjuster anyway.”

That is a mistake. Suffice it to say that even the best-equipped boats can find their navigation gizmos fail to work properly at a crucial time. As they say: Life happens. Even those who do carry a magnetic compass should still have it checked on a regular basis, since compass parts can wear out, give false readings, or even lose track of magnetic north. That’s why compass adjusters like Witherill are so important.

After graduating from the Maine Maritime Academy in 1976, Witherill, now 64, spent the next 35 years as deck officer or captain, working all over the world aboard all sorts of commercial ships from harbor lighters to tankers too large for even the biggest ports. And yes, every single one of them carried a magnetic compass, along with a mind-boggling array of electronic navigational gear. Now no longer in the merchant marine, he started adjusting compasses in 2010. 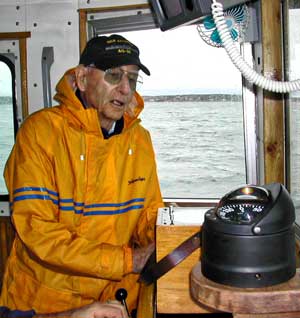 Dave learned the business from his father, Bob Witherill, shown here adjusting a compass on a Prock Marine tug. “Most of my customers are older, they’ve been around for a while,” Witherill said. “Most learned their navigation long before electronic compasses, GPS, and all the modern navigation instruments we take for granted.” While he’s an advocate and user of modern navigation methods and instruments aboard any boat, including his own Sabre 34 sloop, he still thinks a magnetic compass should be standard equipment. Sadly, many boatbuilders today offer a magnetic compass as an option, not standard equipment, he noted.

“Obviously, a (magnetic) compass is a back-up,” Witherill said. “But (it’s) also a check on the GPS. GPS depends on a vessel’s power systems. Anyone offshore, in the fog or heavy weather, should have a reliable way to determine direction no matter what the vessel’s power situation.”

Another compelling reason to have a magnetic compass aboard is its ability to work during electrical storms. Lightning can adversely affect a GPS receiver, even when the bolt strikes well away from the boat. Lightning’s electromagnetic pulse can permanently throw off a GPS receiver’s sensitive, hi-tech components. Moreover, an intense electrical storm overhead, with bolts that don’t even strike the water, can temporarily interrupt GPS signals, making maneuvers in tight quarters extra-tricky. 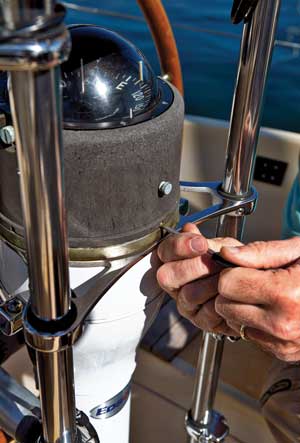 Exterior screws on a magnetic compass may be used for adjustments or just for holding the compass parts together. Witherill’s 10 years of full-time work in the business make it easy for him to determine the difference. “This is the type of boat I often work on,” Witherill said as our launch came alongside the 57-year-old sloop that had been built by Abeking & Rasmussen of Lemwerder, Germany. “Sometimes, they have a nice old compass in a binnacle,” he added, accurately predicting the Wilfred O. White & Sons compass we found in a bronze binnacle just forward of the helm.

With an older compass, Witherill said he first reviews the internal moving and movable parts to be sure he can adjust it accurately. Although a compass is basically a simple instrument, there are parts that do wear out. Those parts have been developed largely within the last 200 years of the thousand-year history of the use of magnetic compasses for maritime navigation.

The first compasses, which were invented more than 2,000 years ago in China, were not used for navigation. Instead, Han Dynasty shamans used them to perform various rituals, including assessing a given location’s harmony with natural forces, or feng shui, that were thought to power the earth and rest of the universe. It took another thousand or so years for Chinese navigators of the Song Dynasty to figure out that magnetized, north-pointing needles could be used to find one’s way on featureless oceans. From then until now, the concepts of navigating with a magnetic compass have remained pretty much the same, although the specifics of making compasses more and more accurate have changed considerably.

“You can tell when the pivot is wearing out when the card is sluggish in moving to its proper heading. A good way to check is to use a ferrous object like a large screwdriver to draw the compass off while you are tied up at the dock,” he explained. “If the compass returns smartly to its original heading, then you are fine. If it is slow, or does not return completely to the original heading, then it may be time for a rebuild.”

Although Thunderhead wasn’t tied to a dock, she was essentially motionless at her mooring that morning and the card did return smartly to its original heading after a couple of close encounters with the screwdriver. Noting that a rebuild would be unnecessary, Witherill moved on to explore the inner workings of the compass.

If the compass had needed to be rebuilt, that’s work Witherill farms out to one of two compass makers, the Ritchie Navigation Company of Pembroke, Massachusetts, or Viking Instruments Inc. of Kingston, Massachusetts. “It’s highly technical work that they’re better equipped to handle,” he explained, “especially when it’s an older compass like this one. Parts are hard to come by and they usually have what’s needed.” Both those companies have been in the compass business for more than a hundred years and have international reputations for their instruments and work.

Inside Thunderhead’s compass, two small bronze rods with boxy fittings at each end ran perpendicular to each other underneath the card. In many modern compasses, those fittings are the magnets that help control how the compass face orients itself to the Earth’s magnetic field. It’s a setup that varies quite a bit from compass to compass and that is relatively new in the history of compasses. Originally, the compass needle itself was magnetized and thereby oriented itself to the Earth’s magnetic field. That’s how many small, handheld compasses are set up today.

The face of a boat’s compass floats in a solution-filled chamber. “I get a lot of calls on bubbles,” Witherill said as he examined the compass’s interior, looking for signs of wear amid the adjustment screws. “It’s one of the most common problems with older compasses.” The liquid used in the card chamber on modern boat compasses can range from mineral oil to purified kerosene and ethyl alcohol, or often a proprietary “compass oil” that may be some mixture of liquids that will dampen the motion of the compass card, but not freeze. Witherill said removing a bubble from a compass bowl is usually a simple task. Sometimes he does this back in his shop in Cumberland but he can also do it on board with certain types of compasses. 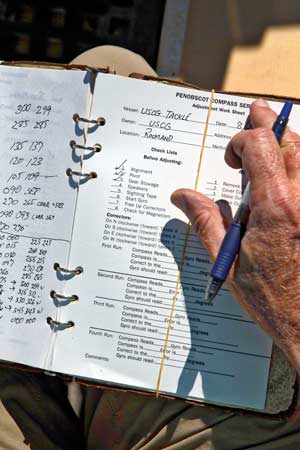 A deviation card notes the difference between a boat’s magnetic heading and the actual magnetic heading. This one was done for a Coast Guard vessel. Once Witherill finished his examination of the compass’s internal parts and determined that all the adjustment screws were intact and would move smoothly, it was time to do the actual compass adjustment, or compass “swinging,” as some call it. For that, we started up Thunderhead’s auxiliary engine and headed for the outer portion of Rockport Harbor. On the way, Witherill unpacked his portable gyrocompass, the instrument against which Thunderhead’s compass would be checked. Although a gyrocompass uses electricity to orient its compass card to either true or magnetic north, it is unaffected by any nearby iron-based objects and therefore much more reliable than a magnetic compass.

With the battery-operated gyrocompass warmed up and running, we used the vessel’s compass to put Thunderhead on various test courses. For instance, when the vessel was headed due west, Witherill checked the reading on his gyrocompass. If Thunderhead’s compass differed greatly (five degrees or more) from his gyroscopic heading, he adjusted the location of the magnets in the magnetic compass. For the adjustments, he used a non-ferrous screwdriver. Most of the time, he was able to bring the two compasses into agreement within a degree or two of each other, sometimes in complete agreement. Due to the vagaries of magnetic fields, complete agreement was not always possible and then Witherill made of note of Thunderhead’s deviation from a given heading.

This process was repeated for all the cardinal points of the compass (N, S, E, W) as well as the ordinal, or inter-cardinal, points (NE, SE, SW, NW). In most cases, adjusting for those eight points is sufficient, Witherill said. Sometimes a customer will request adjusting for up to 24 points. “On steel vessels I offer to check 24 points,” Witherill said. “The Coast Guard and state ferries always take me up on that, but others seem more concerned with the amount of time it will take and stick with the eight.”

Steel vessels of any description are Witherill’s most challenging adjustment projects. He tries to limit the adjusted deviation on any given point to no more than five degrees. But on steel vessels, that’s sometimes just not possible.

In all boats, Witherill notes any deviations on the compass onto a deviation card, which, when he completes a job, is passed on to the boat’s owner. Depending on the number of points adjusted, the construction of the vessel’s hull and distance traveled from his home base, Witherill charges between $175 and $250 for an adjustment, which he said in most vessels will last for up to 10 years before it should be done again. 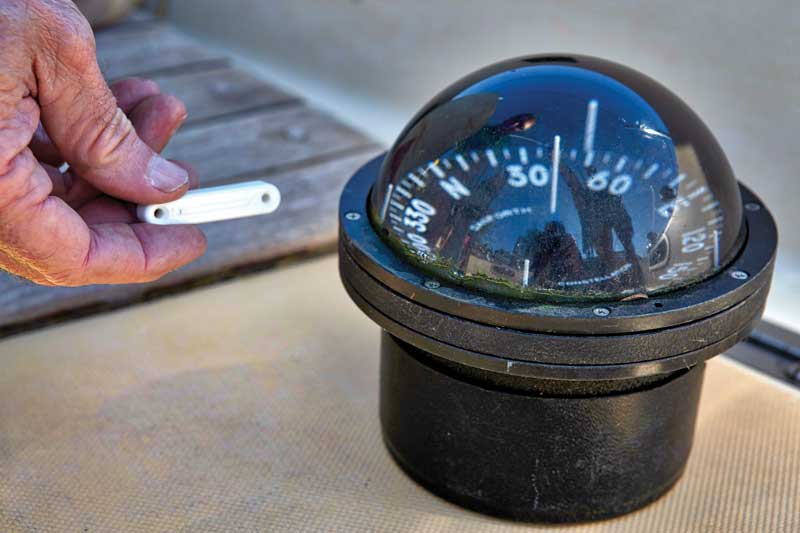 Witherill uses a small white magnet to test the pivot of the face in a customer’s compass.

Of course, given magnetism’s mysterious nature, he does run into some problems that would confound even the most dedicated doctor of cosmological physics. “Hydraulics near the helm drive a compass crazy,” he said, “and I’m not really sure exactly what causes it.”

Indeed, when you delve into magnetism, the mysteries do pile up. 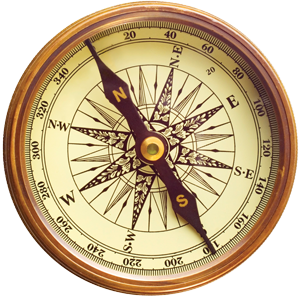 North of the equator, a magnetic compass shows your boat’s orientation, or heading, in relation to the geomagnetic North Pole. In a perfect world, the compass always gives you the exact direction in which your bow is pointed. In reality, however, other factors come into play.

First, the geomagnetic North Pole and the true North Pole are not the same thing. The difference between the two varies depending on your location, and is noted on nautical charts. So if the electronic GPS gives you one heading and the compass indicates another, that’s to be expected (although a GPS can be set to display magnetic north instead of true.)

Compass adjusters are unconcerned with variation, focusing instead on deviation, which is the number of degrees the compass needle strays from an accurate magnetic reading of the boat’s heading. Many items aboard a boat can introduce deviation, including misplaced wiring, stainless steel galley equipment, portable computers, and so on. The compass itself can also introduce deviation through age, jostling, and cheap design.

Some measure of deviation is unavoidable. The compass adjuster’s job is to reduce it to the minimum and let you know exactly how many degrees the needle strays on a given heading. Knowing that, you can get home safely when Maine weather presents an unexpected challenge. —Ken Textor