Is a child whose parents are successful artists inclined to become an artist, and when this happens, why does it happen? Is it genetic or the result of being raised by artists in a home full of art?

In the case of the Van Campens, it was probably a bit of both—nature plus nurture. Artists Tim and Susan raised two daughters in a Thomaston, Maine, home filled with art, and both parents worked full-time in home studios, thereby immersing their girls in that world.  The family tree also includes both artists and art lovers. 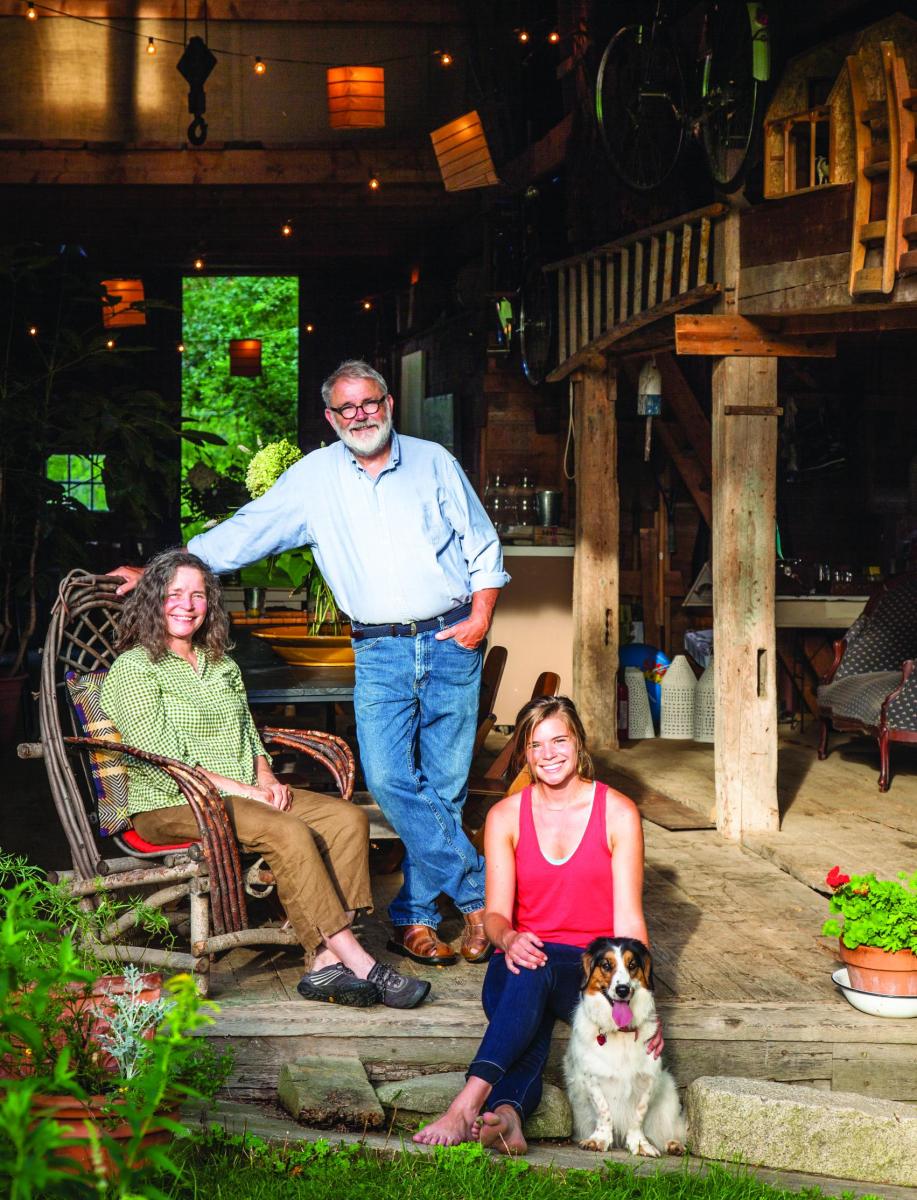 Susan, Tim, and Greta Van Campen, with Greta’s dog, Milly, enjoy the summer sunshine on the back stoop of Tim and Susan's Thomaston barn and party space. Missing is daughter Molly who lives in San Francisco, and her new baby (Tim and Susan’s first grandchild). 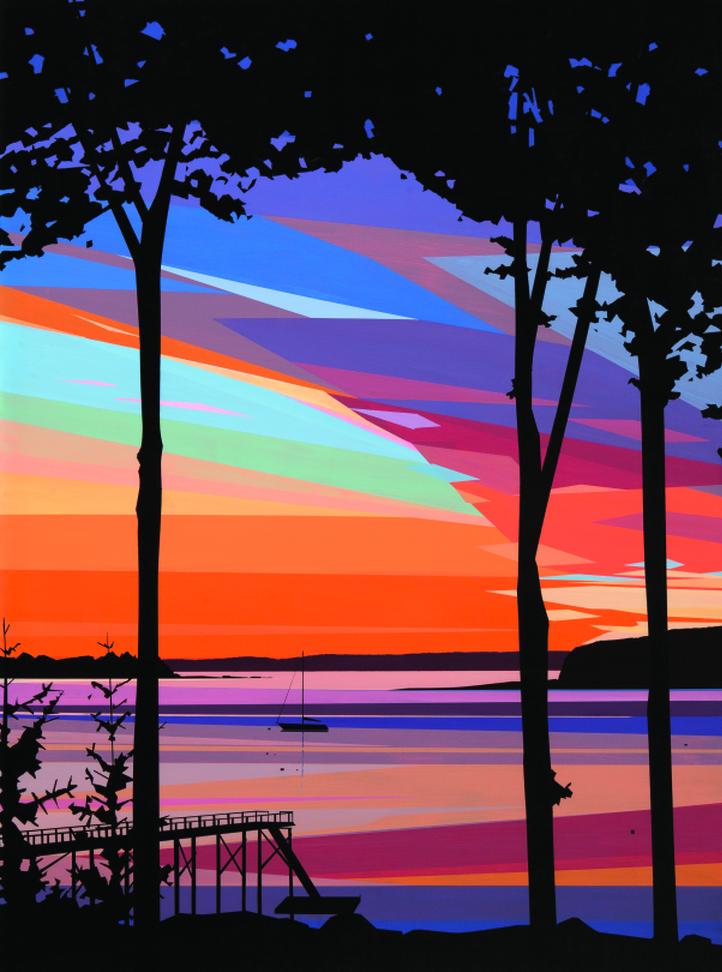 A summer sunrise on Long Cove, near Tenants Harbor, as viewed from her studio and interpreted in her trademark style by artist Greta Van Campen. Courtesy Dowling Walsh Gallery

Tim and Susan’s youngest daughter, Greta, has become an accomplished artist, like her parents. Her older sister, Molly, now works as an interior designer in San Francisco.

The two parents insist that they did not push their daughters toward art; actually they hoped Greta would pursue a career in science. But she chose to go into the family business, joining her parents in the spotlight that they’d occupied for 30 years in the art world. She began with group shows in the early 2000s and had her first solo show in 2011. Since then, she has had a number of solo shows in different parts of the country, including four at Rockland’s Dowling Walsh Gallery.

Home for Tim and Susan is an 1820 farmhouse with an attached barn on 51 acres of hayfields and gardens, fronting the Oyster River in Thomaston. Greta lives in a cottage on Long Cove in Tenants Harbor.

The three paint in radically different styles. Tim works on large canvases or on a computer to create custom designs, usually for rugs, textiles, and household items. He favors large, abstract geometric blocks of color and tiny, intricate geometrics. Susan paints delicate, romantic watercolors of flowers from her garden and looser, more impressionistic oils of landscapes. 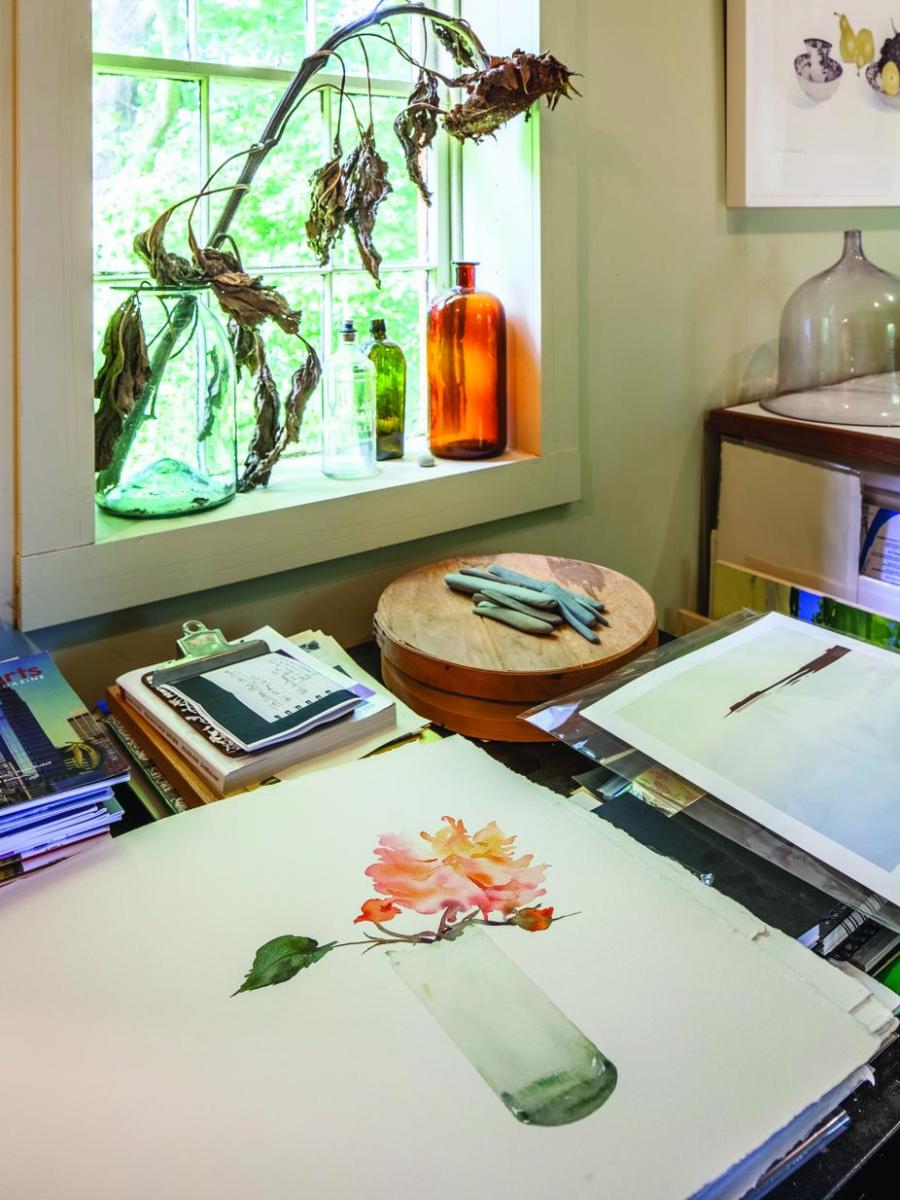 A faded flower from Susan Van Campen’s garden hangs over one of her flower watercolors.

Greta, whose paintings distill the landscape into sharp-edged blocks of color, sees herself as a “combination of my parents’ styles, which makes sense, seeing how I grew up.” That included painting next to her mother and helping her father in his studio. “I get my inspiration from being in nature like my mom, but the way I choose to depict it involves some abstracting and arranging…. more like how my dad works,” said Greta.

Wearing her bathing suit while she worked on her colorful paintings this past summer, Greta could jump into the ocean behind her cottage and go for a swim while the paint dried. Her most recent project involved painting views from her studio of Long Cove, its islands, boats, and trees, in all four seasons and at different times of day. She photographs the scenes and stores them on her computer to reference later. This work formed the basis of a solo show of her artwork this fall at Dowling Walsh.

On an early August day I found her in her studio, with a violently pink and orange sunrise on her computer screen, and a fragmented painted version beginning on a large piece of fiberboard laid flat on a nearby table. This fragmentation or fractioning of a readily recognizable scene is her trademark style. She combines bright, clear colors, sharp angles, and scenes of natural beauty—usually of Maine, although she recently painted her way through all 50 states. 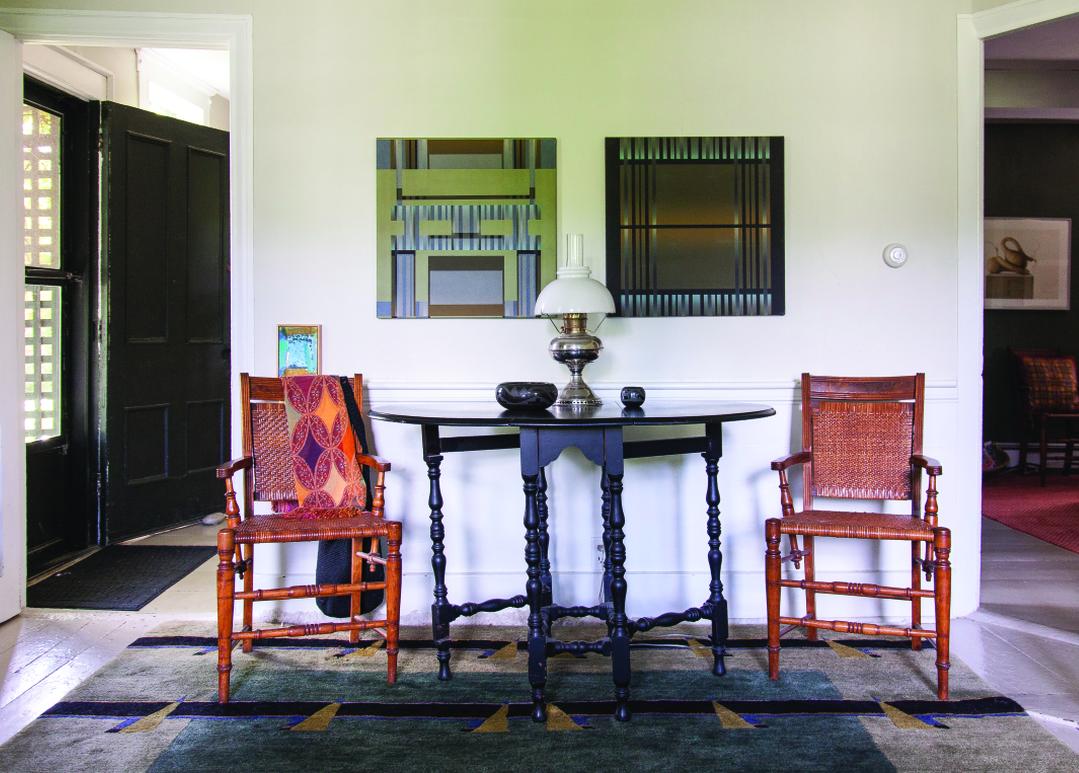 A rug designed by Tim Van Campen for Michaelian and Kohlberg Rugs is on the floor and two of his acrylics hang on the wall in the front parlor of the Van Campen’s 1820 Thomaston farmhouse.

Tim and Susan Van Campen met in 1972 at the Pennsylvania Academy of Fine Arts in Philadelphia, where they were both students. They married and eventually moved to a small Cape in Rockport, following in the steps of Susan’s sister and her husband, who had taken a job teaching at Rockland’s high school. The Van Campens saw Maine as a “good place for poor, struggling artists.”

Susan’s parents soon followed. Her mother was Patricia Ault Headley, whose half-brother George Ault (1891-1948) was associated with the Precisionist painting movement. Patricia’s father, Charles Henry Ault, was an amateur painter who served as president of the Western Art Association and was one of the founders of the St. Louis Art Museum. 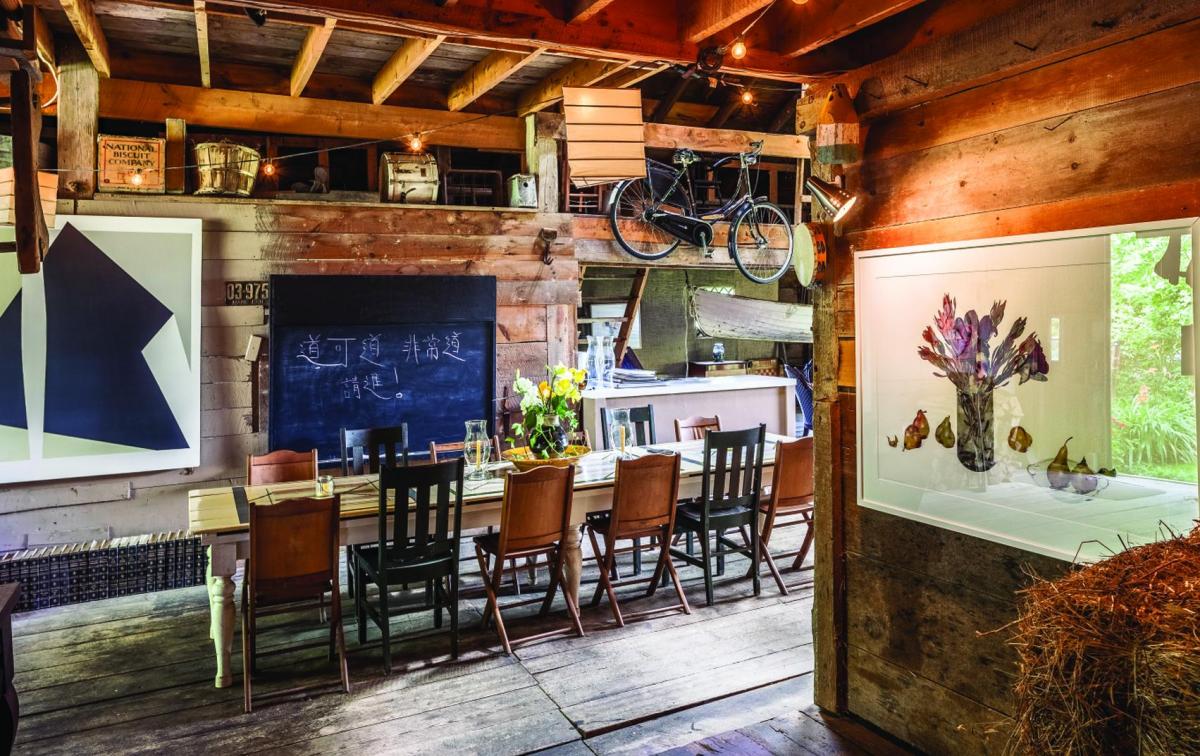 A long table in Tim and Susan’s barn is set for entertaining. On the right hangs one of Susan’s floral watercolors, and in back on the left hangs one of Tim’s massive acrylics.

After six years in Rockport, Tim and Susan moved the family to a large house, built for prosperous ship builder Robert Walsh in 1855, on Knox Street in Thomaston. This is where Molly and Greta grew up,  with their parents painted in different ends of the expansive house. They could ride their bikes to their grandparents’ home up the street. By all accounts, theirs was an enchanted childhood—surrounded by loving family and lots of art. Both attended Thomaston High School. Molly then graduated from Colby in 2002, and Greta from Bowdoin in 2005. Tim and Susan eventually moved outside the village of Thomaston to a smaller farmhouse, where they have lived for 15 years. 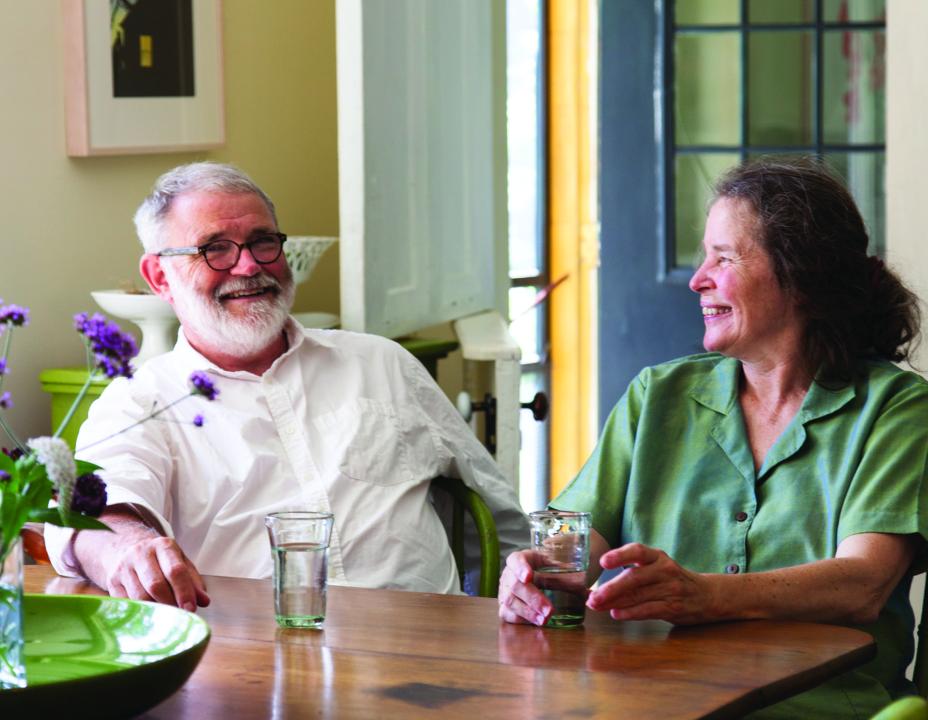 Tim and Susan Van Campen share a moment at home. Decorators and homeowners often come directly to Tim to commission rugs. He also works with Michaelian and Kohlberg, Inc. and Wilton carpeting. The walls of Tim’s boathouse studio on the Thomaston waterfront are hung with colorful rugs, designed by him and hand-knotted in Nepal, Turkey, India, Afghanistan, or China.

Susan grows the flowers she paints, working quickly to capture them as they change and fade. She also hosts a group of fellow artists in her garden behind the barn for weekly painting and sketching sessions during the summer.

While her parents market their work through galleries and more traditional venues, Greta has embraced social media such as Instagram and Artsy. She helped finance her 50-state painting mission by asking for support on Kickstarter. 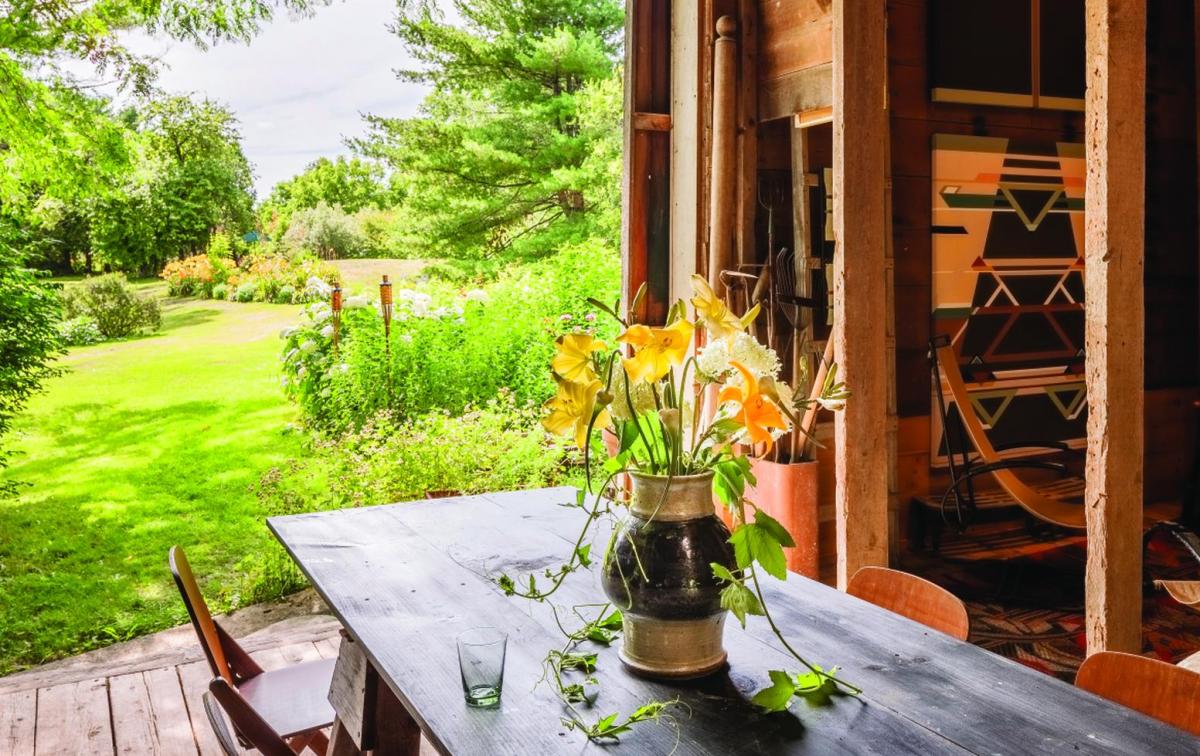 Susan’s flower gardens and 50 acres of hay fields run down toward the Oyster River. In the back on the right hangs one of Tim’s tapestries.

It is a happy coincidence that one of the islands Greta can view from her Tenants Harbor studio is Southern Island, owned by Jamie Wyeth. There, another member of a clan of famous artists carries on the family business. Considering the many members of the extended Wyeth family who paint, it is always interesting to wonder how members of an artistic clan help or compete with each other and how they feel about each other on a professional level.

Explaining the Van Campen family’s happy interaction, Greta said, “All of us in the family look at each other for advice and we take the advice. We’ve done that our whole life. When we were kids, we went to Nantucket every summer and Mom would have a big show there…. Molly and I would play on the beach and we’d help pick the works Mom would show. We all really like each other’s work,” she said. “Dad is great with color, and Mom works in the hardest medium there is—watercolor. We each wish we could paint like the other.”

That must be the greatest compliment one artist could give another.

Ann Dodds Costello lives in Los Angeles and Owls Head. She is the author of Smart Women: The Search for America’s Historic All-Women Study Clubs, 2015 published by Lulu.com.

gretavancampen.com is represented by Octavia Gallery in New Orleans and Houston, by Dowling Walsh in Rockland, by J GO Gallery in Park City, and Hespe Gallery in San Francisco.

vancampen.net is represented by Hirschl & Adler Modern in New York City, Dowling Walsh in Rockland,
and Haynes Gallery in Nashville. She will be featured at a show at Dowling Walsh in 2017.

timvancampen.com is represented by Caldbeck Gallery in Rockland and Icon Contemporary Art in Brunswick, Maine.