To build replicas of old bassoons and make new music

In all of the United States there is but one active maker of historical bassoons. Three years ago that maker, musician Leslie Ross, moved from a sixth floor studio in New York City’s Lower East Side to a former cannery built above a stream that flows into Penobscot, Maine’s Northern Bay.

In all of Maine there are merely a handful of avant garde musicians. Perhaps two handfuls. Now, this same creator of baroque and classic bassoons is adding sound installations and experimental music festivals to downeast Maine’s performance repertoire. 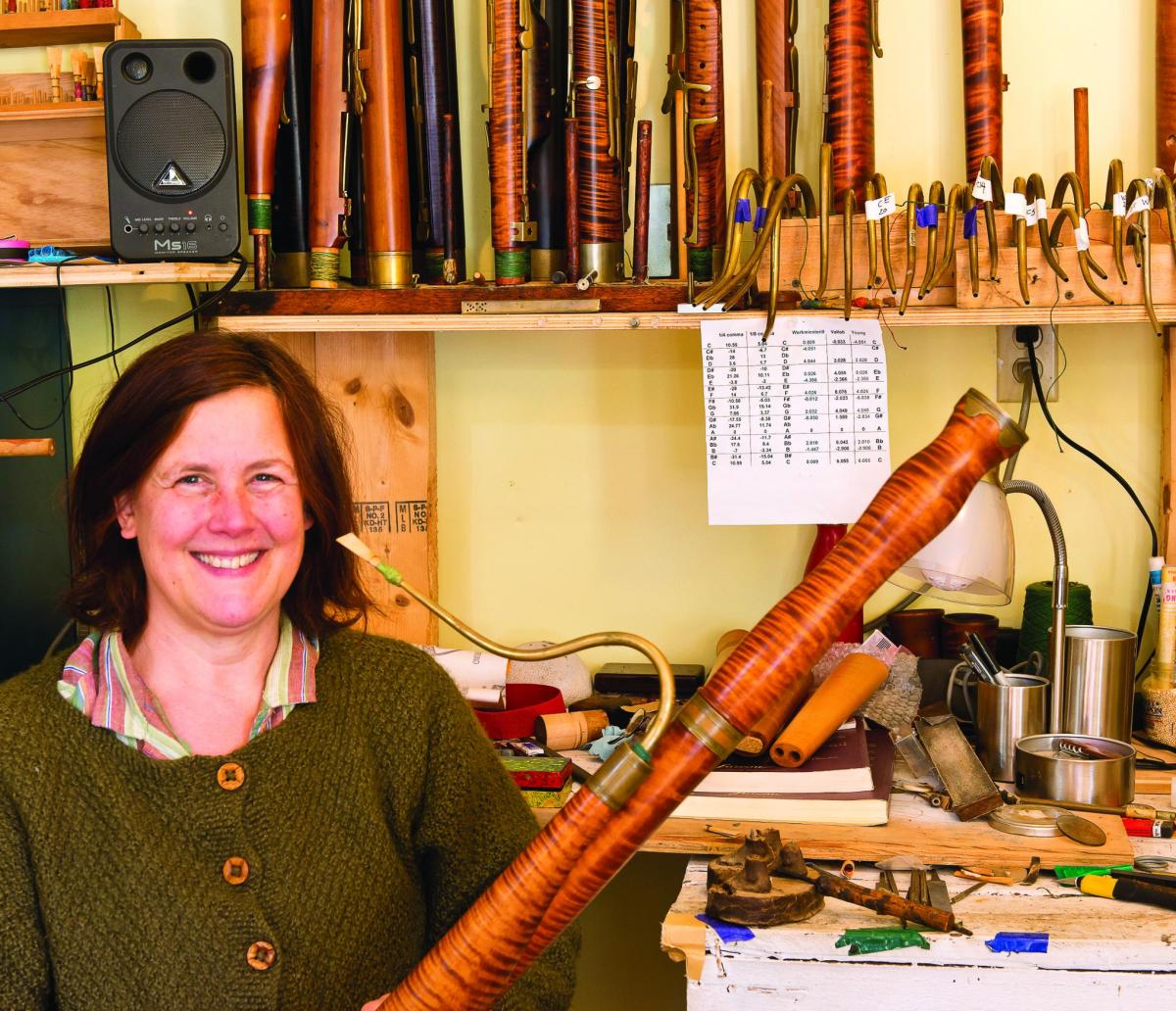 At her tuning desk, Leslie Ross plays and adjusts a baroque bassoon that she recently built. Behind her is an array of historic instruments.

The events are based out of the home she shares with Zeke Finkelstein, a writer and scholar, along with several cats, a flock of chickens, and some two dozen birds. The trills and calls and rhythmic beats of the birds form their own sound installation while Ross carefully, patiently, builds her period instruments in the sprawling building.

What Ross and Finkelstein call The Cannery was once the site of the Penobscot Canning Company. From the 1930s to the early 1950s it served as a collective where community members brought vegetables and fruit to be canned and sold to a wider market. Later privatized, it canned the blueberries that were packed inside Duncan Hines Blueberry Muffin Mix. More recently, The Cannery was the home and studio of artist David Larson and his wife, weaver Carole Larson. 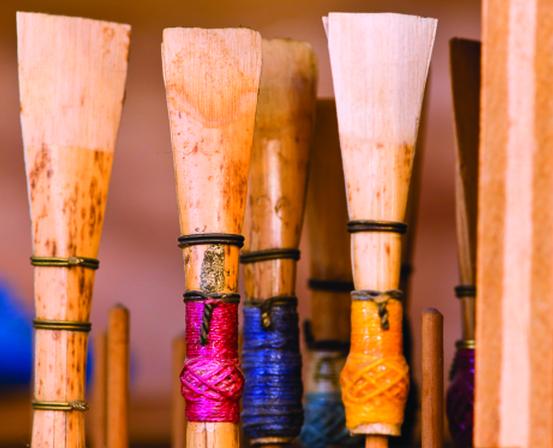 Ross keeps a selection of historic reeds to use for measuring and comparison when she makes new ones. Ross’s diverse musical interests echo an eclectic childhood. Her mother, who taught French and English and eventually ran an alternative high school, was born in Morocco; her father was an airplane mechanic in Montreal. Ross spent the first eight years of her life in Turkey, where five times each day she heard the muezzin’s call to prayer. The loss of that call was her first experience of homesickness when the family left Turkey, eventually settling in Canada.

Though she studied piano in elementary school, when Ross was shown the array of instruments for her high school band, she chose the bassoon. She was fascinated even then with the construction of things; the very day she was given the instrument Ross brought it home and proceeded, piece by piece, to take it apart. “I had to see what was inside,” she said. But dismantling the bassoon’s intricate keys was easier than reassembling them. Horrified, the instrument in pieces, she stayed home from school the next day while trying one way and then another to put it back together, finally finishing in time for band practice on the following day. That didn’t stop Ross from exploring the insides of her bassoon several more times—but carefully enough not to have to miss school again.

As Ross studied music and began performing, her interest  in the shape of instruments continued. Having also taken up the 15th-century viola da gamba, she found herself compelled by early music and its instruments. After hand-copying early scores for a music publishing company, she used her earnings to tour European libraries and museums one summer, seeking both the early scores and the instruments they were played on.

Back in Montreal, Ross began assisting a friend who made recorders. In return for her work, he gave her studio space to fashion the tools she’d need to build early bassoons. Then one morning, she got a call from the States. “I hear you are a good woodwind maker,” said the voice at the other end of the line. Though barely a beginner, Ross didn’t disagree. Within two weeks, she moved to New Jersey to learn bassoon making, eventually heading to New York and starting her own business. She remained in the city for nearly three decades, until rising rents and the subsequent loss of community led her and Finkelstein to consider Maine, where they already had been spending some summer months. 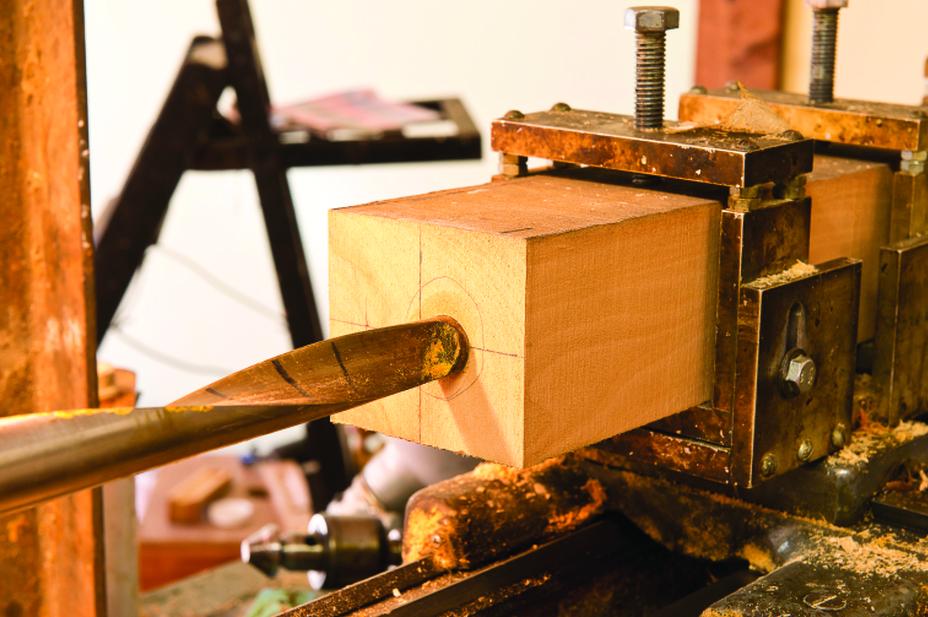 The block of curly maple being reamed on Ross’s lathe eventually will become a bass dulcian.

The ancestor of the modern bassoon is the dulcian. Like today’s bassoon, its interior hole, or bore, doubles back on itself and widens; it also has a double reed attached to a metal crook, known as a bocal; and angled tone holes that look like tiny eyes peering out of the wood. The dulcian of the Renaissance has two long, beautifully shaped metal keys and eight finger holes. The baroque version has four to five keys, and the classical has nine to ten. But early instruments were not standardized, so Ross constructs several versions from each period. What she doesn’t build is the more complicated modern bassoon with its 23 keys and hard rubber lining.

Building even the simplest dulcian takes as much as six weeks of work; that’s after the planks of pear, apple, and curly maple have been weathered for more than 10 years, and the particular instrument has been sized, the initial hole drilled, and the wood left to rest for a full year. Only then are the precise inner dimensions sculpted to a two-tenths of a millimeter precision. Beyond that, there’s the cutting of the metal keys, and the hammering of the bocal, or long mouthpiece, from a flat piece of brass, nickel, silver, or gold into a tube that often has its own slightly parabolic interior.

And then there’s the tuning. Once the instrument is reamed and drilled and sanded (and sanded some more), and oiled and stained, once the keys are affixed, Ross spends about two weeks playing it. For a few hours, she just plays, since the very first vibrations of music within the wood alter the instrument’s sound. After a day or two, Ross will notice things. “There are always modifications because each instrument is built from a different piece of wood.”

As careful as she is, “if one angle is a bit shallower or deeper, it’s going to influence how the instrument sounds. Even two instruments made side by side from the same piece of wood can be slightly different, because it’s a different part of the tree.” It’s not that one tone is better than the other, she added. That’s a personal matter for the musician. “You want the scale, you want it to be in tune, you want it to play both loudly and softly, and you want some tonal flexibility to color notes; if those things are there, you can still have different feeling and different sounding instruments.”

Even if an instrument is “off,” figuring out why and how is interesting. “Sometimes it’s as simple as a sharp edge that needs to be rounded over, but where, and which sharp edge?” If you change the shape, you change the tone. 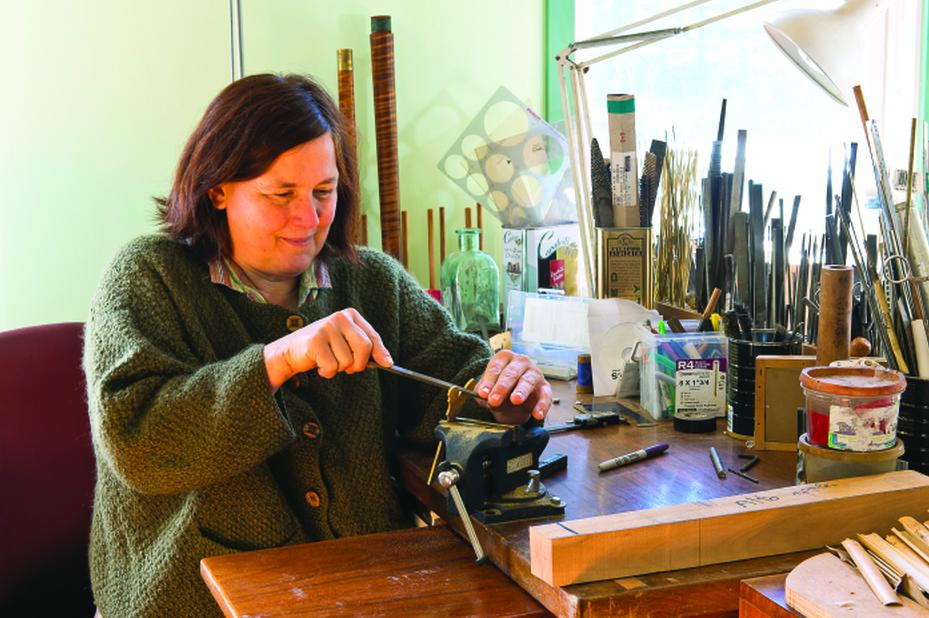 Sitting at her worktable, Ross finishes the keys for a new bassoon.

Innovation is a constant in music, from baroque bassoons to contemporary sound installations, and Ross follows in that tradition, continually experimenting with her instruments. In New York, she also built sound sculptures, often in collaboration with other musicians and dancers. Her most famous creation was a bicycle organ that would play as she pedaled the city streets. 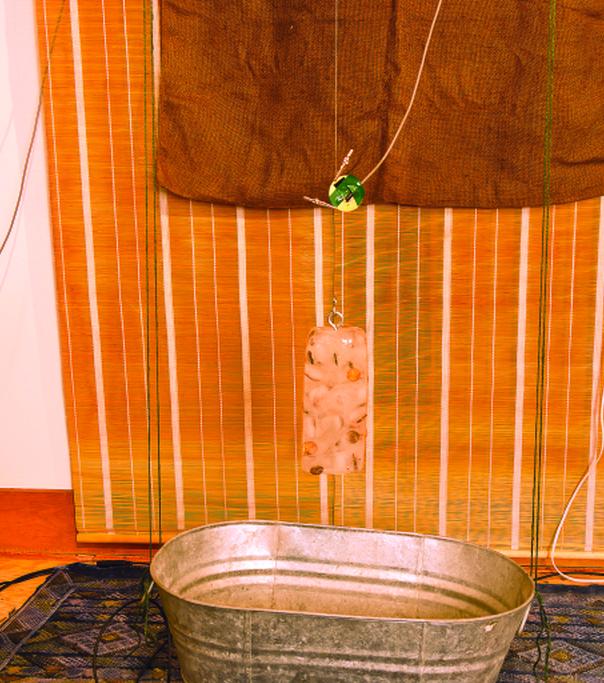 Ice-on-Wire, an installation by Ross, in which sound emerges from a motor strumming a wire, ice melting into a bucket, and every so often, pennies falling. In Maine, she has been hosting musical gatherings and installations. A 2016 installation called “Ice-on-Wire” featured a small motor strumming a wire holding an ice block laden with pennies. As the ice melted, water dripped into a tin bucket and every so often a penny fell, lessening the tension on the wire, and causing a subtle lowering of the pitch. Ross called it “a construct about the intangibility of passing time.”

The structure of sound—the physical vibrations that create it—fascinate her. She has trained herself to create multiphonics, playing two notes at once, often for extended periods, necessitating great concentration. The notes beat against each other, causing pulsations that can literally be felt within the listener’s body. Enhancing the experience, Ross will place a microphone on each bassoon key, so that the music comes directly from the tone holes through as many as 16 speakers. The microphones cause the music to move through the room in something of the way it might travel through the instrument—an experience the musician feels as well as hears.

She meets weekly to improvise with musician Nate Aldrich of the University of Maine in Orono, a sound artist who has worked internationally as well as at the Portland Museum of Art. For the last few autumns, Ross’s minimalistic sound structures have been joined by other musicians, many of whom travel hundreds of miles to explore and experiment in this cannery by the sea. Ross has yet to ride her bicycle organ through Penobscot. The move from New York to Maine was not kind to it. She has another in the works. But then she has a lot in the works—the chickens, a greenhouse, ideas of creating musical residencies in her expansive home, outreaches to the local community, and crates of cans left over from the cannery that she’s determined to turn into music, somehow.

Donna Gold is a writer and editor living in Stockton Springs. She is founder and editor of COA, the magazine of College of the Atlantic, and also runs a business helping people and communities preserve their memories and histories, www.personalhistory.org.

Leslie Ross can be found online at www.leslieross.net as well as in Penobscot, Maine.