Oh No! When Lead Meets Granite

Adventures of a sometimes rock-hopper 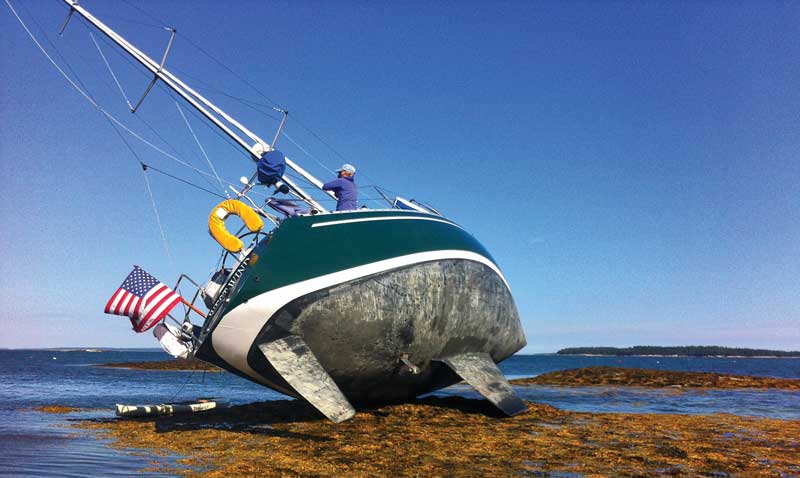 If one must perch unintentionally on a ledge, a padded cushion of rockwood on smooth granite is perhaps the best-case scenario while one waits for the tide to turn. Photo courtesy Ben & Dianna Emory

Boy, do I hate the adrenaline rush when our lead keel hits granite and I’m thrown forward against the steering wheel. My resumé as an experienced navigator may look impressive on paper, but I do occasionally find those Maine ledges. Fortunately —knock on wood— damage so far has been minimal, thanks to slow speed, rock configurations, and lack of significant waves.

One morning my wife Dianna was in the cabin on her cell phone when I shaved the ledge north of Stave Island in Frenchman Bay too close.  “Oh sh**!” she screamed into the ear of the distinguished elderly gentleman at the other end of the line. A rising tide soon freed us.

Charts of the Maine coast are outstandingly accurate, but I have found two uncharted ledges, both in waters that I have sailed for years.

A red nun west of Chatto Island marks the entrance to Center Harbor. My whole life I have cut inside that nun, while still giving a healthy berth to the ledges that extend from the island. My father did the same before me. One September afternoon, a half hour before low tide, I cut through as usual in a boat drawing 6'4" and struck rock. How could that be? I examined my paper chart, then my plotter. They showed about 10 feet of depth at low tide, but when I peered over the rail that’s not what I saw. Another old-timer, also sailing inside the nun, saw me and hailed incredulously, “Ben, are you aground?” Whether anyone else in the harbor knew about this rock I have never learned. But hearing about it afterward, Philip LaFrance, who handles many of the harbor’s moorings, wondered whether to call it Ben’s Rock or Emory Ledge.

My other uncharted rock encounter was north of Bean Island in Frenchman Bay. I have sailed through that area many times, and then one day found a ledge about a hundred yards northwest of can Number 3 and a rock right next to the buoy. Again incredulous, I grabbed the chart and looked closely at the plotter. Both showed 12 feet of water. When I returned home, I queried a Sorrento friend who has sailed those waters all her life. She knew of a yawl hitting it years before in a race. Since these encounters I have become more cautious about charts.

Then there are those rocks that may or may not exist, those shown on the charts as “Rk Rep.” That means that although charting surveys have not detected it, reports of a rock have been made. I have grazed one of those in the Roque Island Thorofare. Some cruising guides and innumerable passages made through that spectacularly lovely waterway had led me to doubt the rock’s existence. Then, late one afternoon, we did bump and slide over it. Curious, I went back in our peapod with the sounding lead and had an extremely difficult time finding the rock—it must be a pinnacle with only a tiny amount of surface area on top.

Most upsetting and chilling are the groundings on a falling tide when no amount of heeling and jockeying with the engine can free your boat before the water drops lower. I have gone high and dry in Georgia mud and on Maine granite, and there is no question which sort of bottom provides more peace of mind. On a Maine ledge it can be impossible to tell how the boat will rest as it heels over. A boat perched atop a steeply sloped rock face and heeled toward deep water might topple into the deep water, flood, and sink. Or if the ledge is topped with sharply pointed rocks and the bilge settles onto such a point, it might puncture the hull.

Not long ago on a falling tide, we went up on the Bold Island Ledges at the eastern end of the Deer Isle Thorofare, another passage that we have traversed endlessly. Dianna needed to go below, and I took the wheel before I realized that I was not well oriented. Just as I reached for the chart, we struck. Efforts to use our sails and engine to free ourselves failed. It was two-plus hours after high tide. We sat on that ledge for more than seven hours, much of the time way over on our side, until we finally floated free under moonlight.

I held my breath until the tide dropped enough for me to see that the ledge was gently sloping and heavily cushioned by rockweed. Then we relaxed, set a stern anchor to help us slide away when the water returned, and enjoyed conversations with the numerous fishermen and recreational sailors who stopped to offer us assistance. Greatly adding to our peace of mind was the much appreciated telephone assurance from the Billings Diesel and Marine boatyard at the other end of the thorofare that they would send a boat if we needed help during the night.

This grounding did have an unexpected silver lining though. 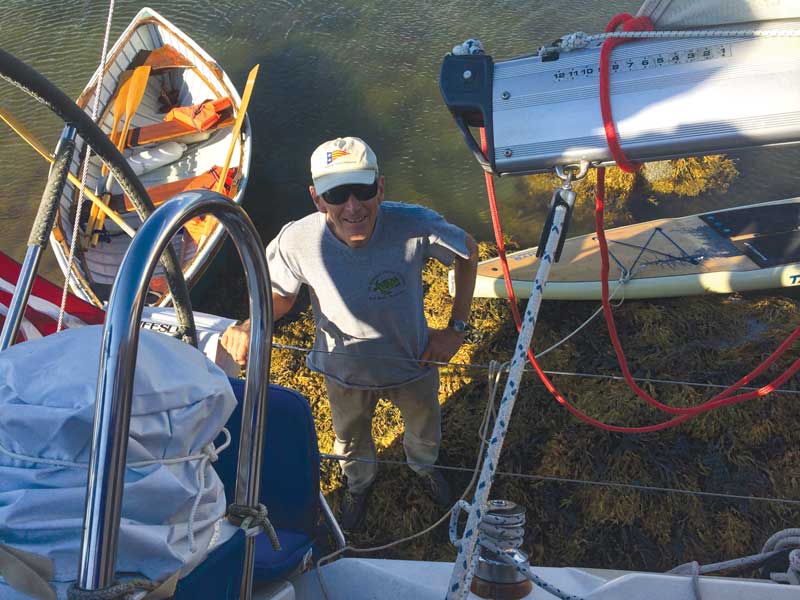 The author, looking surprisingly upbeat, peers up from the ledge. When the boat is laid over, it’s a long way down from the high side. Photo courtesy Ben & Dianna Emory

The first would-be helper, who arrived in an inflatable, astounded me by asking, “Do you know that you have no propeller?” How could that be? Earlier we had powered out of Vinalhaven’s Seal Bay, and when we hit the ledge, I had used the engine to try and power us off. I had not detected the loss of the propeller. With my overloaded brain focused on heeling with the sails, playing the main sheet to swing the bow back and forth, and going backward and forward with the engine, it may have been too much to comprehend whether there was propeller wash.

When the boat was totally high and dry, I dropped onto the ledge and found the propeller lying on the rockweed. The hub’s rubber bushing mostly remained on the propeller shaft, clearly worn out from age.

We had planned to leave soon for our annual cruise to the eastward; it was a stroke of luck to learn about the propeller’s condition beforehand.

At 11 the next morning, a Friday, I landed at the Brooklin Boat Yard float and, propeller in hand, found the mechanic. “I hope that didn’t come off your boat!” he greeted me. By that afternoon a new hub for the propeller was on its way from Rhode Island. Monday afternoon, I received an e-mail telling me the propeller parts had arrived, the boat had been hauled and the propeller replaced, and the boat was back on her mooring ready to go.

Ben Emory is a lifelong sailor who splits his time between Salisbury Cove and Brooklin, Maine. When not on the water, he has spent decades actively involved in Maine land conservation.