The tender will have two cockpits, one in front for the driver and one in back for passengers. The space between is occupied by the engine. Rendering courtesy Matthew Smith

Businessman J. Pierpont Morgan was known in the yachting world for his massive sleek steam yachts, all named Corsair. Each one, and there were several over the years, made a statement, whether anchored off Newport, Watch Hill, Fishers Island, or adjacent to New York’s Battery.

These massive yachts seldom berthed at a pier, so the first impression made upon a visitor was made by the launch that conveyed him or her out to the mother ship. In the same way an admiral’s gig set the tone as it conveyed a passenger from shore to ship, Morgan’s yachts were introduced via a fancy small boat.

Like the yachts themselves, these launches were masterpieces. Most of them over the years were design-and-build products of Nathanael Herreshoff of Bristol, Rhode Island. And they were as pretty as any powerboat ever.

Those of us who love yachts and yachting are fortunate that some purists today still revere the nautical style of the Gilded Age. Although the ownership and identity of the principal yacht are confidential, we can tell you that somewhere in the world a Corsair-ish vessel is currently being constructed. Naturally it requires a launch of complementary merit, configured to perform up to modern standards. That exquisite powered tender is being built right here in Maine by the talented crew at Artisan Boatworks of Rockport.

Back when Morgan’s yachts were built, the chosen designer hailed from Bristol, Rhode Island. Today, the designer of this contemporary launch hails from just two towns over in Barrington. Matthew Smith has spent his career in the northeast region of Narragansett Bay, and he has a number of Herreshoff-inspired designs to his credit.

Mostly due to space constraints on the big yacht, this launch will be just 24 feet long. The specs called for a fast shuttle, able to achieve 24 knots lightly loaded. It had to accommodate up to 13 people and still plane. Draft was limited to just two feet, in order to allow the launch to be stored unobtrusively on the deck of the mother ship and to allow easy beaching. The owners wanted a sun canopy over the aft cockpit. Most significantly, they wanted this small, fast boat to look like its antique forebears.

Key to project success was coordination between the designer and builder. Artisan Boatworks was the ideal choice for the tender’s construction. Boatshop owner Alec Brainerd and his staff are known for their technical and finish excellence. Brainerd has always specialized in wood construction, both traditional and cold-molded. While he specializes in building classic designs, many by Herreshoff, he has introduced modern techniques and materials. He employs a computer-assisted-design modeler, and argues that this is an important element, especially when building modern designs. 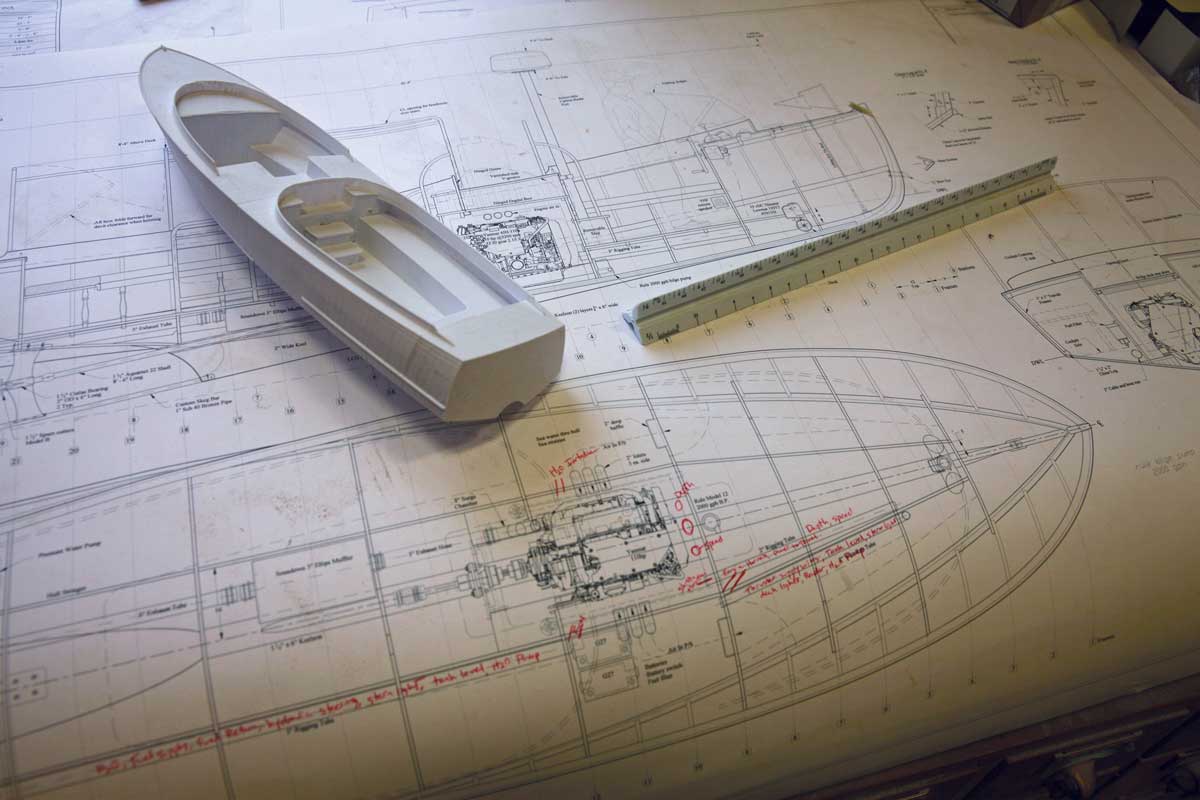 A computer, linked to an inkjet printer, produced the plan drawing. The three-dimensional boat model was fashioned using a different kind of printer. Photo by Art Paine

Smith is of similar bent. He holds a degree in Naval Architecture from the University of Michigan. All his work is done on computer, which works well for Brainerd who uses digital files for computer-aided cutting and machining.

Working with Gardner Pickering of Hewes & Company Marine Division in Blue Hill, Smith sent the cutting files for the bulkheads, frames, and hull stringers to Hewes. Within a week, Artisan had them set up on the shop floor. While this process is now fairly common in custom boatbuilding, it is still amazing to consider that this one step replaces lofting and all the handwork associated with building each individual frame. The Herreshoff Manufacturing Co. was at the forefront of production boatbuilding in its day, and Capt. Nat would surely appreciate the benefits of this type of technology.

Most launches in the JP Morgan era were round-bilged. Being long and skinny is what made them fast. With a restriction on length, Smith had to look elsewhere for speed. He came up with a light, hard-chined planing hull, and added a powerful engine.

Wood and epoxy combined with high engineering and construction standards can yield near the ultimate ratio of strength to weight. In this case, the boat’s bottom consists of two layers of Okoume mahogany plywood over stringers, while the topsides are lightweight Alaskan cedar covered by thin skins of e-glass set in epoxy.

The design includes two cockpits, a small one up front and a larger one aft. Both are bordered by round-fronted cockpit coamings—a definite Herreshoff feature.

The design achieves the remarkably shallow draft of just over two feet by using a “tunnel drive.” This is a concave halfpipe extending up into the hull, and partially surrounding the propeller.

The design process involved some give and take with the builder.

For instance, when working out the sheerline of the completed hull, Brainerd supplied the digital lines file to Hewes & Co. and had a tiny 3-D model made. After he and Smith inspected the model, they added an inch of sheer height to the bow.

The launch’s powerful Yanmar 4JH4-HTE 110-hp engine turns its shaft horsepower through an Aquadrive thrust bearing and CV shaft so that vibration and noise are minimized and guest comfort is maximized. Even here, attention was paid to detail: the silver-colored Yanmar was broken down, masked, and repainted in shiny white Awlgrip. The launch will also feature a Lewmar 110 TT bow thruster—something the driver of a stretched Herreshoff launch would have died for!

All hardware is bronze, including the custom Kobalt engine controls. Much of it is custom cast, including the steering “wheel,” which is actually a stylish horizontal bar. The aft cockpit will include a removable drop-leaf table with special bronze posts and details. The uprights for the aft cockpit’s bimini cover are being detailed with devices that allow for lowering the supports, either hydraulically or electrically, to reduce height when the tender is stowed aboard.

It has been my privilege to visit Artisan Boatworks several times to follow the development of this project. Were Capt. Nat alive, I think he would have been pleased to observe how his art and genius have inspired a beautiful new-antique yacht tender.