A first-hand lesson in lobstering 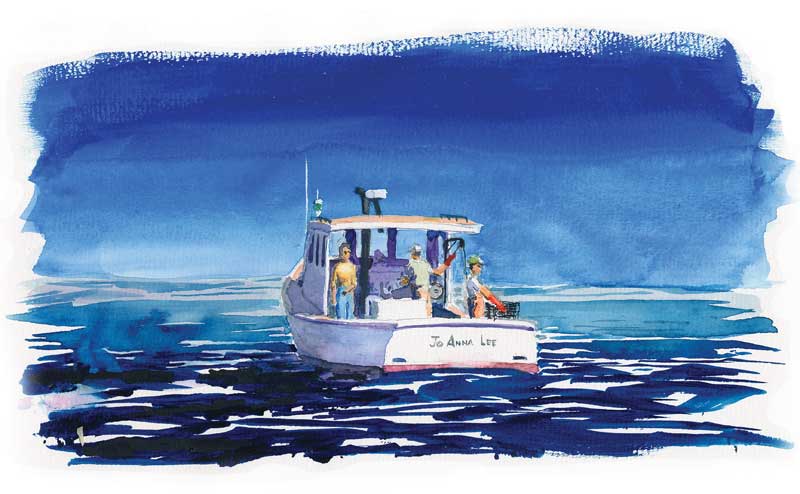 My host cut the beamy, 38-foot boat’s engine and leaned over the low gunnel to gaff his line below a red-and-white buoy. With the muscle memory of tens of thousands of hauls, he slipped the line up over the snatch block and down around the motorized pot hauler. He flicked the hauler’s switch. Slime spray ran down his orange slicker as he peered into the murk. Then he straightened, stopped the hauler, dropped a dripping lobster trap onto the gunwale, flipped it open, and reached in.

Lobsters flew. Shorts, eggers, and V-notched females sailed back into the water, keepers went into a box on the boat. Hip to hip with his dad, the sternman yanked crabs from the trap and tossed them after the rejects. In a quick move, he picked out a wiggling sculpin, wacked its head on the gunwale, and impaled the fish alongside a row of fetid bait. Next, the young man walked the empty trap sternward, swapped the old bait bag for a fresh one, and slapped the top shut.

A safe 10 feet away from the half-open wheelhouse, I grinned. This was my first time witnessing commercial lobstermen hauling a trap.

I write mysteries set off the coast of Maine. In the one I’m working on now, my protagonist finds a dead lobsterman and infiltrates the profession’s secretive world in her quest to track down the killer. I’m a marine ecologist—but no lobster expert—so my desk is littered with books and research papers about lobsters and lobstering. I’ve interviewed a few guys about their livelihood and can see lobsterboats from my front porch. But I’m embarrassed to say I’d never set foot on one. So on a soft summer morning, a generous neighbor agreed to put up with me because I really needed to see, hear, and smell the whole lobster-hauling thing up close.

I promised not to identify the captain, sternman, boat, or our exact location. I’ll call the senior gentleman with huge hands Scotty, his skinny, bearded son Patrick, their boat the JoAnna Lee, and our port of call somewhere between Portland and Camden.

Patrick, whose wife is a schoolteacher, seemed to appreciate the awkwardness of my ignorance. As Scotty gaffed the string’s next pot, Patrick demonstrated how he determined whether lobsters met the size requirement for keepers. Wearing bright blue gloves, the sternman picked up a brass gauge with one hand, a lobster with the other. “We put this end here just below the eye socket and run it right down the back. The measure’s got to be between three and a quarter and five inches.”

I called out “thanks” and swallowed half a dozen questions because the waiting trap was dripping onto the deck. Patrick picked up a device that looked like a dentist’s tool, slipped thick elastic bands around his keepers’ claws, dropped the animal into a tank, and was back at his father’s side before I’d worked out the dance of his fingers.

There were four pots in that string. Patrick rebaited the last one, slid the whole row sternward on the gunwale, and pivoted toward the wheel. Scotty lifted his right arm, and the JoAnna Lee leapt forward. The sternman quick-stepped away from the flailing line and watched traps sail off the stern and splash one by one into the foaming wake.

As we steamed from one string to the next, I realized that a lobsterman from 50-odd years ago would feel pretty much at home aboard the JoAnna Lee. Fiberglass boats have mostly replaced wooden ones, but the basic design is the same. The high bow helps with stability in a following sea and the wide, shallow stern with handling and transporting pots. As in the past, the semi-enclosed wheelhouse provides some weather protection although modern ones are kitted out with hydraulic pot haulers and electronic gear like depth sounders and GPS trackers.

As with their half-century-ago counterparts, modern lobstermen are an intriguing mix of rugged individuals and cooperative neighbors. Scotty owns his boat and decides when, where, and how to fish. He learned the craft from his father and stands alongside his son every workday. On the other hand, Scotty’s livelihood depends on close ties with others who defend and fish the same areas and know who can set traps where—and who can’t.

At the end of the day, I waved at the JoAnna Lee’s stern as Scotty headed out to unload his catch and take on fresh bait and fuel for the next day. Patrick gave me a quick salute and returned to cleanup—hosing pot and bait slime off the deck into generous stern scuppers.

Standing there, I vowed to create characters in my story that fairly portrayed people like Scotty and Patrick. They’d be hard-working individuals proud of their heritage and grit. Interdependence, kinship, defense of fishing territories, respect for conservation—that was important, too. Combined with my marine background, all this was great fodder for a rich-as-lobster intrigue. Stay tuned.