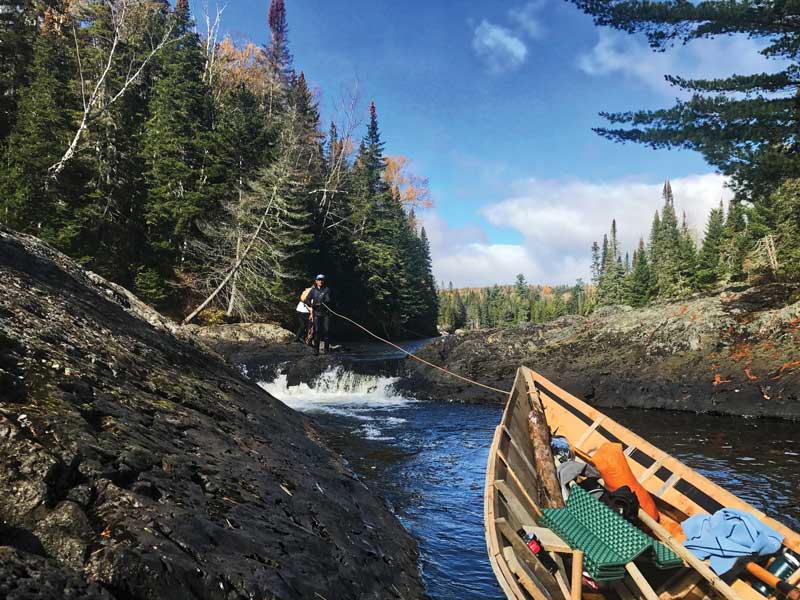 Traveling up the north branch of the Dead River required getting out of the boat often to haul it through skinny spots. The water was too shallow in much of the river to do much actual paddling. Photo by Hodding Carter

Most of us prefer to relive tales of grueling hardship from the comfort of our armchairs. But not writer Hodding Carter. Epic stories of struggle inspire him to go adventuring. The Rockport, Maine-based writer has retraced Lewis and Clark’s footsteps across the West, built a replica Viking ship and sailed it across the Atlantic, and canoed down the Mississippi River during flood season.

His most recent adventure was re-enacting American hero-turned-traitor Benedict Arnold’s infamous 1775 expedition up the Kennebec River and through the Maine wilderness to Quebec City. Arnold and his force of 1,100 troops started out in 220 roughly-built, flat-bottom river bateaux. Beset by bad weather, bad luck, and bad maps, Arnold arrived at the bank of the St. Lawrence River with a vastly reduced force of weak and starving men, and the subsequent attack on the city was a miserable failure. 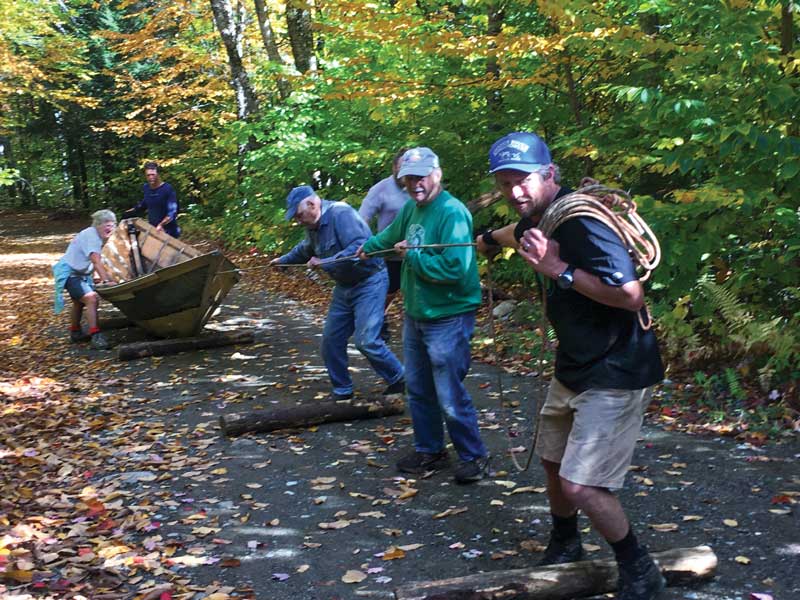 The team hauled the 417 lb. boat on a 12-mile cross-country portage known as the Great Carrying Place between the Kennebec River and Flagstaff Lake. In Arnold’s day the route was unmarked. Today the trail is maintained by the Arnold Expedition Historical Society. Photo courtesy the author

Carter and his small band were more successful. They paddled, pushed, and carried one 417-pound boat, leaving from Pittston, Maine, in late September and arriving in Quebec City six weeks later to plant a symbolic flag of victory high on the citadel.

Entranced as a child by Arundel, Kenneth Robert’s fictional account of the Arnold Expedition, Carter has wanted to do this for 20 years. Of particular interest was testing the worthiness of the wooden bateaux—Arnold has been faulted for using the ungainly boats instead of more nimble canoes. Arnold’s fleet of boats was hastily put together by Gardiner builder Reuben Coburn in two weeks. The vessels leaked, capsized in rapids, and were difficult to portage. Arnold eventually abandoned them. 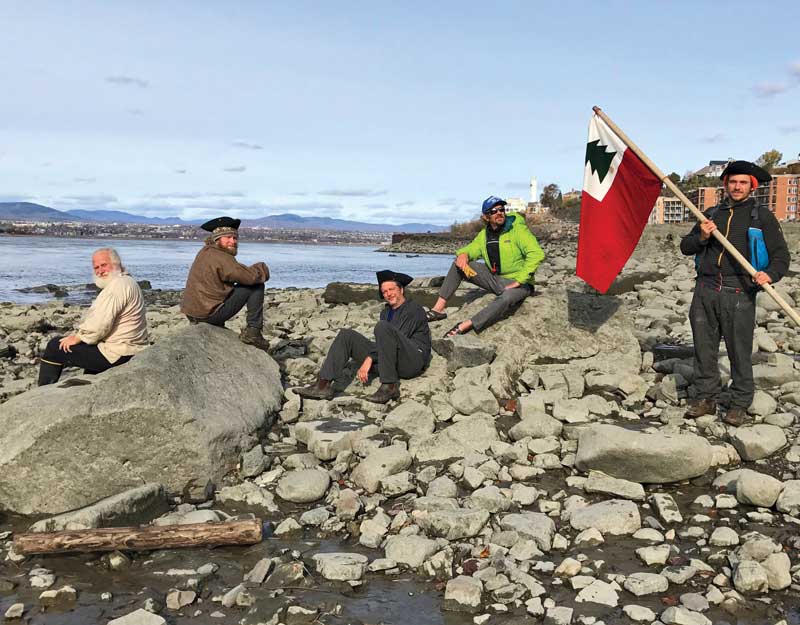 But Carter has always believed the boats were not the cause of the expedition’s failure. “Arnold had bad luck,” he said. “None of his soldiers were river people and they got hit with a hurricane, early snow, and rain and ice storms.”

Phippsburg builder Rob Stevens—who is also building a replica of Maine’s first ship, the Virginia—constructed the replica bateau. Seeking to duplicate the rushed time and materials from the 1700s, he used white pine planks and he finished the job in 35 hours, with Carter’s help. The resulting flat-bottomed, double-ended vessel is 22' overall with a waterline length of just 12' and a beam of only 2' on the bottom.

The trip almost ended before it began. Carter and Stevens launched the boat two days before their planned departure to give the wood time to swell. But it sank overnight, and required urgent repairs. Rockland schooner owner Noah Barnes came to the rescue with pitch to seal the seams so that when Carter and his crew took off from the site of Coburn’s former yard, the boat was still leaking but not nearly as much.

Carter’s team included Stevens, University of Vermont outdoor program coordinator John Abbott, whitewater guide Ben Schott, and filmmaker Wilder Nicholson. They paddled when they could, up rivers and across ponds and lakes, and pushed the boat up shallow streams where wading in the frigid water and wrestling with the heavy bateau kept them from traversing more than a few miles a day. They rolled the boat on logs across land, including 12 miles and 1,000 feet up and over a mountain on the toughest part of the route. In all, they traveled 350 miles.

“My torso was covered with bruises from having to use my body to push and steer the bateau overland,” said Carter. “From our suffering we gained an appreciation for Arnold’s leadership in getting his soldiers through unimaginable hardships.”

Along the way, they made many new friends and learned more about Arnold.

“The amazing thing was how people just kept finding us in the wilderness and helping,” Carter said. “So many people are so into the history of the Arnold Expedition, and this was bringing it to life for them.”

A supporter provided a trailer to allow the crew to wheel the boat a few miles through customs at the Canadian border, where agents took selfies with the group and seemed more amused than concerned about the threatened attack on Quebec. 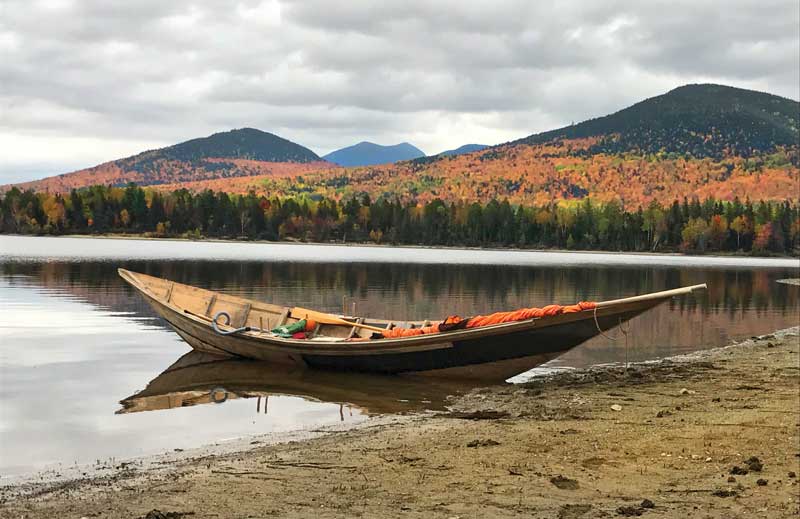 Built in just a few days, the bateau leaked much of the time, hence the modern pump snaked over the gunnel. The orange tarp wrapped around the spar in the bow was used as a sail whenever possible. The boat can hold four people and their gear, but rides better in the water with three people. Photo by Hodding Carter

The six-week trip was extremely challenging, but the bateau held up, said Carter.

“Historians have said it was the wrong boat for the job,” he said. “I think it really was the right boat. It was heavy and ungainly, but canoes could never have carried all the ammunition and food Arnold needed. It was almost an impossible task, but it was definitely the right boat.”