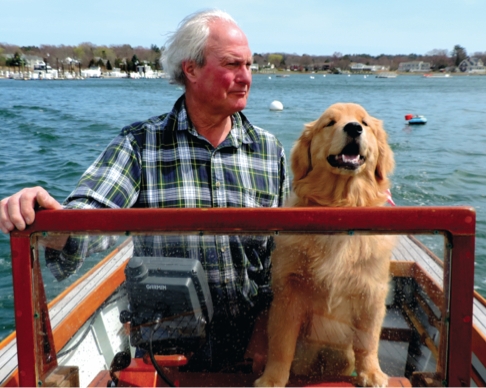 Eloise is a three-year-old golden retriever who serves as first mate on outings with Allan Vaughan near their summer home in Pretty Marsh, Mt. Desert Island. The boat, by the way, is a wooden 18' center-console runabout built by Vaughan in 1989 and named Chasing Wabbits. In addition to making sure that Allan has the boat under control, Eloise keeps an “eagle eye” out for eagles—as well as porpoises and seals—on warm summer days. “We love Maine and so does Eloise,” says her fellow first mate, Gail Vaughan. 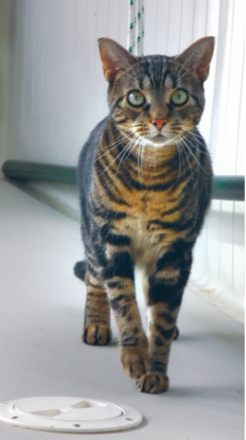 Following in the pawprints of legions of seagoing cats—historically employed as mousers—the former shelter kitten and shorthair classic tabby, The Beetle, had no idea what she was in for when she was adopted by Capt. Bob and Lynette Walther. The Beetle spends her summers dividing her naps between a circa-1880 barn in Camden and on midcoast waters aboard a 1920s motor-cruiser, Pelican. She winters aboard the 53-year-old Willard Vega trawler Old Salt on Florida’s St. Johns River and down in the Florida Keys. Though this kitty has earned her sea legs, she has yet to notch up a single rodent. An accomplished feline aerial acrobat, she has never landed in the drink and has no plans to do so. The Beetle loves to play fetch, stroll the deck—on the outside edge of the rail, of course—and she never turns down the opportunity for a good belly rub.