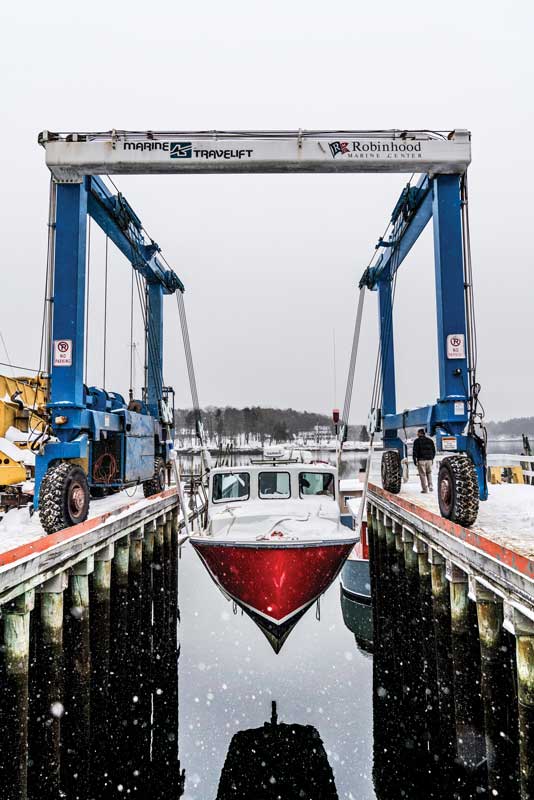 Services offered at Derecktor Robinhood, which has a 50-ton Travelift, include storage, maintenance, and refits. During the summer, the marina has 120 slips and 80 deep-water protected moorings, with plans to add another 20 moorings. Photo by Heather Perry

A new chapter in the story of Robinhood Marine Center on Georgetown Island began in March 2016 when the storied yard became Derecktor Robinhood.

Founded in 1950 to produce custom yachts, Robinhood Marine was purchased in 1981 by Andy Vavolotis, known as the founder of Cape Dory Yachts. Vavolotis built up the business, offering marina services, storage, maintenance, and repair, as well as opening the Osprey Restaurant, Spartan Marine Hardware, Riggs Cove Rentals, and a small library and museum.

Thirty-five years later, Vavolotis put the property on the market. That was the perfect calling card for Derecktor Maine, a partnership that consists of Paul Derecktor, John Koenig, and Derecktor Shipyards of Mamaroneck, New York.

“We were looking for a yard both in the marina and repair business,” said Koenig. “That’s not easy to find, but Robinhood turned up and we liked it. It’s a beautiful spot and a good yard.”

Now in their second year of ownership, the partners have acquainted themselves with the yard’s operations, purchased a nearby piece of land to expand storage and service, rebuilt some of the infrastructure, improved marketing outreach to broaden their customer base, and implemented new technologies like software applications that allow transient boaters to book their slips by smartphone or computer.

The goal, said Koenig, is to reinvigorate the yard while retaining the “village” feel of this tucked-away gem.

“I finally realized why people say that they don’t even go off the island,” he said. “When you’re there in the summer, it’s so nice to stay. I’ve really come to appreciate that.”

Derecktor Robinhood occupies a charming spot, down narrow, wooded lanes on the land side, and perched on the water side above quiet Riggs Cove, on the Sasanoa River.

Colonial settlement of this piece of waterfront goes back to Benjamin Riggs, who was born in 1759 in Gloucester, Massachusetts. According to Vavolotis, Riggs was 11 years old when he shipped out on a coasting schooner. The schooner put in at Robinhood Cove many times for firewood and fresh water. The young Riggs was so impressed with the place that he vowed to settle there some day. He continued in the coastal trade, and also ran blockades during the American Revolution, but, true to his vow, returned in 1784. He built a log cabin, and started a general store for townspeople, traders, and fishermen bound for the Grand Banks. That was the start of a thriving community. Today, several waterfront buildings at the yard date back to the late 1700s. 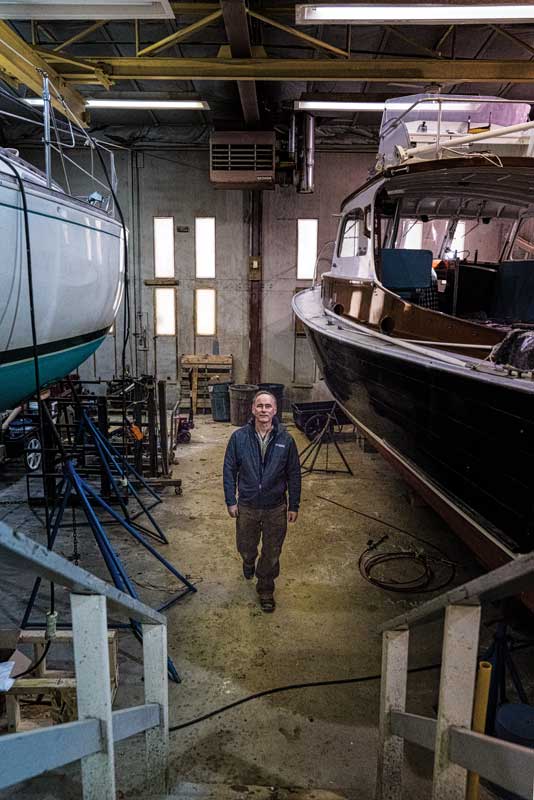 When Derecktor Maine bought the yard in 2016, the partnership’s first move was to hire Neil Collins as general manager. Collins, shown here in a work bay, previously spent 10 years at Maine Yacht Center. Photo by Heather Perry Vavolotis, who grew up in Taunton, Massachusetts, started his career at Boston Whaler. He detoured into real estate, but returned to marine work when he designed his first Cape Dory, and set up shop in a garage. His lines of fiberglass sailboats and powerboats proved wildly popular. By the late 1980s, he owned 140,000 square feet of factory space, and had about 325 employees producing thousands of fiberglass sailboats and powerboats. He bought Robinhood Marine when he was looking for a site to demonstrate an economically powered displacement dragger. Eventually Cape Dory went out of business, but Robinhood remained strong, focusing mainly on marina services, along with maintenance and repair. In 2010, Vavolotis designed and built several houseboats, which he rented out. When he put the yard on the market, he was looking for a buyer who would love the area and its historical flavor as much as he did.

Along came Koenig and Derecktor, both of whom have their own interesting tales to tell.

Derecktor Shipyard, established by Robert Derecktor in Mamaroneck, New York, in 1947, built a wide range of noteworthy boats, including Dennis Conner’s 1987 America’s Cup contender Stars & Stripes 87, plus megayachts and Coast Guard cutters. Derecktor’s son Paul took over from his father, and has led the yard for more than 25 years, producing sailing yachts and motoryachts, high-speed ferries, and workboats in aluminum, steel, wood, fiberglass, titanium, and high-tech composites. The company has facilities in Mamaroneck and Fort Lauderdale, Florida, which also provide service, repairs, and refits.

Paul Derecktor and Koenig are lifelong friends and partners in various business ventures. One of those ventures was New York Fast Ferry, transporting commuters from Sandy Hook, New Jersey, to Wall Street in Manhattan. On Sept. 11, 2001, after terrorists flew two planes into the World Trade Center, the company’s boats, with Koenig on board, ferried people off Manhattan, beginning right after the first strike. 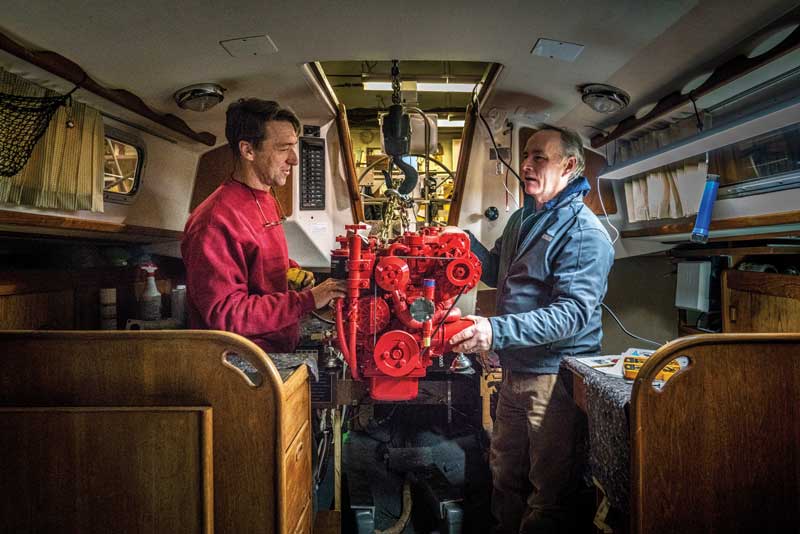 “We were operating that morning and, as soon as it happened, we turned to evacuation,” he said. “We probably carried 2,000 people out of the city.”

After 9/11, the company ran into new obstacles that made it too tough to compete, so they sold the business. Koenig subsequently purchased and operated Marina on the Bay and The Clam Hut in Sandy Hook. About a decade later, Hurricane Sandy destroyed both the businesses, and Koenig’s home. It took a couple of years to get out from under that disaster and finally sell the property.

But soon, he was ready to dive back into the marina business.

“My wife is an extremely strong person,” he said. “We basically said, ‘We’ve got to move to the next step.’”

Koenig and Derecktor searched along the East Coast for marina/boatyard properties. The right facilities with that combination are hard to find, said Koenig. So when Robinhood came on the market, they were delighted.

“Marinas as nice and complete as Robinhood are very rare,” he said. 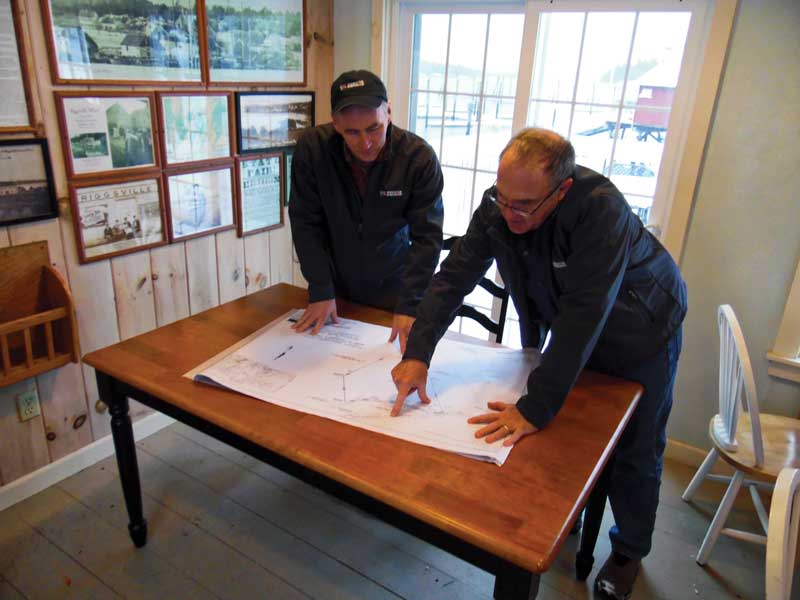 Once the purchase was complete, the partners’ first move was to hire a general manager, Neil Collins, who previously spent 10 years at Maine Yacht Center in Portland. Koenig and Collins spent the first summer simply getting the feel of the place. Along with several large storage and service buildings, the site also includes vintage structures like the circa 1790 log cabin, which is now the Old Rigging Shop Studio; a connecting building that houses a gallery with old photos and written history; and the library, circa 1795, in a structure that Benjamin Riggs built to support his coastal trading business.

All together, the yard can provide winter storage for 90 to 100 boats. For summer customers, there are 120 slips, most full-service; and 82 deep-water protected moorings. The marina is generally full and the Riggs Cove houseboat rental fleet is almost entirely booked each summer, with customers coming from across the country. In response to growing customer demand, the partners purchased 24 acres nearby to build an indoor heated storage building.

Koenig isn’t surprised that business is brisk. The yard is situated in the middle of one of the world’s premier cruising grounds. It’s easily accessible from Portland and just a short distance to destinations such as Boothbay Harbor and Bath. It’s an ice-free, deep-water port, and the workforce is experienced.

“It’s truly a unique place,” Koenig said. “When Andy sold it to us, the first thing he said after closing was, ‘It’s a gem.’ And he’s absolutely right.”