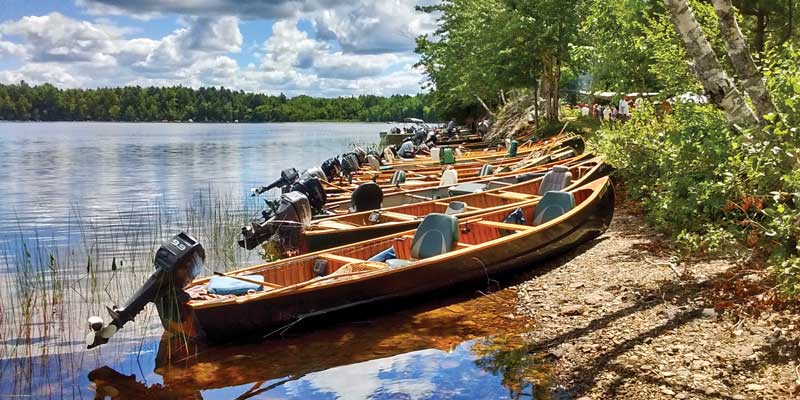 Grand Lakers lined up during a lunch break on Big Lake. The “Downeast shore lunch” is a time-honored piece of the guided experience. The meal is cooked on the open fire and might include: chicken or steak, the morning’s catch pan fried, potatoes and onions, and Maine apple pie. One of the traditions includes a hot cup of the famous guide’s coffee, which is brewed by mixing an egg (shell and all) with the coffee grounds! Photo courtesy Dale Tobey

“I’m cursed by them,” joked Dale Tobey about the square-stern canoe endemic to his Grand Lake Stream home. “I have to sit in one all summer and then work on them all winter.” He chuckled and then added, “But there could be worse curses.”

The lakes district of eastern Maine is vast, under-populated and renowned for its fishing. In these parts, most roads lead to the shoreside village of Grand Lake Stream. The former tannery town now constitutes about 100 year-round residents, though the population grows tenfold during the landlocked salmon and smallmouth bass seasons. So it’s not surprising that a little shy of 100 years ago, a special boat evolved at the hands of local guides and canoe builders. Ever since, the eponymous Grand Laker, an agile square-stern canoe, both long and slender, has remained the preferred craft of the region’s guides. The boats have been touted for their responsiveness when paddled and when powered by an outboard. 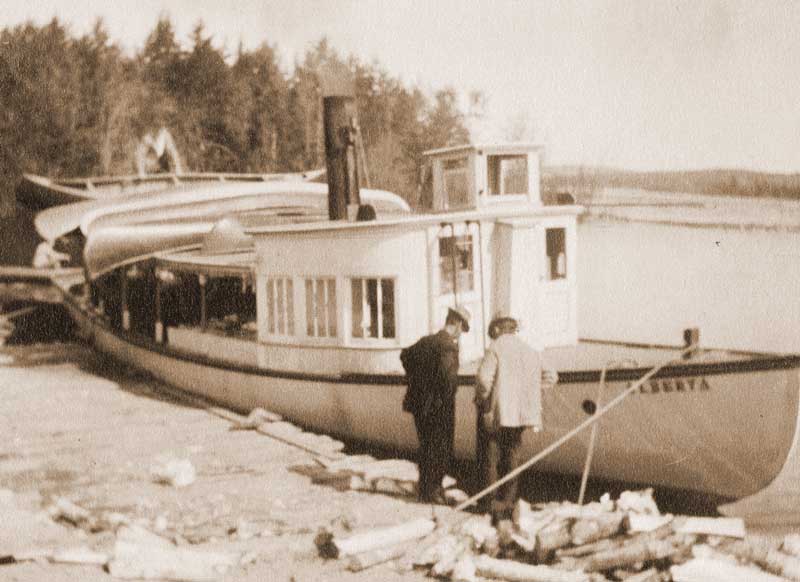 Before the advent of the outboard motor, a steamboat would shuttle boats, guides, and their clients out to remote coves in the 14,000-acre Grand Lake. Photo courtesy Bill Shamel

For as long as Grand Lakers have graced the region’s waterways, the town’s primary industry has revolved around the sporting life, namely: lodges, guiding, and canoe building. The region still supports about a dozen lodges and active membership in the Grand Lake Stream Guides Association clocks in at about half the town’s population. Canoe building, while far below its mid-20th-century pinnacle, continues to be integral to the town’s fabric.

The Grand Laker design is believed to have emerged during the 1920s. Herb “Beaver” Bacon, Joe and Bill Sprague, and Arthur Wheaton are names commonly cited as the design’s originators. Most of these men were guides, and thus brought an outdoorsman’s sensibility to their designs. Bacon, Joe Sprague, and possibly Wheaton are also known to have built wood and canvas canoes—“double enders” in local parlance—even earlier.

“The early builders were designing canoes specifically for West Grand Lake,” explained Bill Shamel, 71, who learned the building trade from his father-in-law Pop Moore and continues to use the 1924 mold that was handed down to Moore by Joe Sprague—one of the original builders—in the 1930s. Moore, who died in 1994, built hundreds of Grand Lakers over his 60-year career. Shamel returned to Grand Lake Stream in 1992 after a career in the Coast Guard and has been building full time ever since. 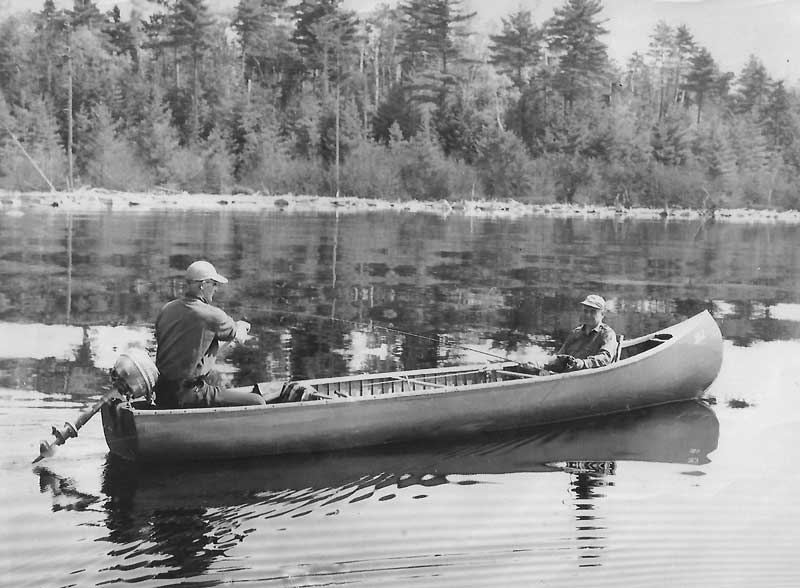 Hazen Bagley, a well-known Grand Lake native and guide, is shown here in a “first generation” Grand Laker. The Ole Evinrude motor on the stern is generally considered to be the motor that led to the development of the Grand Laker, according to builder Bill Shamel. It’s a classic version of the old story, he said. “What came first? The chicken or the egg? The canoe was here. The motor came. Then the Grand Laker came.” Shamel attributed the boat to Herb “Beaver” Bacon. The “sport” fishing in the bow is aviation pioneer, U.S. Gen. Jimmy Doolittle. Photo courtesy Bill Shamel

“These were guys with little technical training,” added Shamel. “It’s pretty amazing what they came up with.” Shamel was quick to point out, however, that he sees the Grand Laker as representative of an evolutionary stage in regional canoe design more than an outright invention.

The Grand Laker building process is identical to that of the Maine-built wood and canvas canoe, which began to emerge in the Bangor area in the late 1870s. Builders today also pay homage to the 20' Passamaquoddy bark canoes built to handle the big lakes that permeate the St. Croix watershed—these were truly the original guide boats of the region.

Grand Laker construction begins upside-down atop a wooden mold. Once stems, decks, and inner gunwales are in place, cedar ribs are steamed and then bent to hull shape. Next, cedar planks are nailed over the ribs, and where those planks conform to the chine they must be trimmed, or gore cut. Once the hull is removed from the mold the top two planks, stern and outer gunwale are fastened into place. 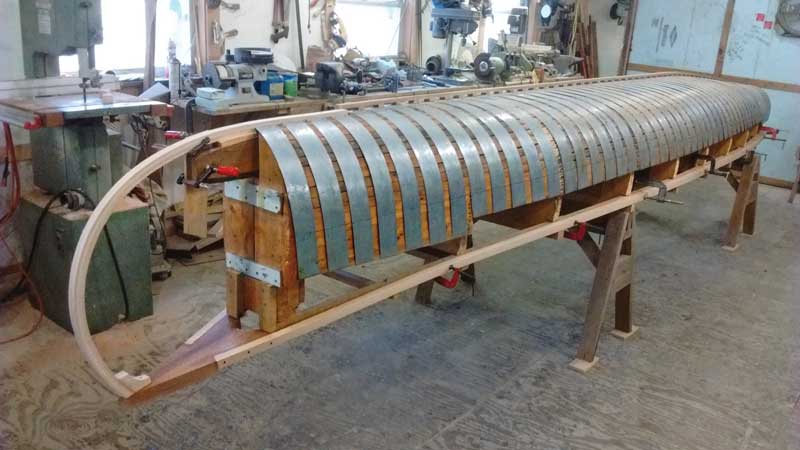 Boats under construction in Dale Tobey’s shop. Note the metal bands for clinching the planks to ribs and the strongback across the top of the mold. Steamed ribs are slipped under the strongback which conforms the ribs to the hull shape as they dry. In Tobey’s shop a boat stays on the mold for only three days, though it will be about three weeks (100 hours) before it’s finished. Photos courtesy Dale Tobey (2) 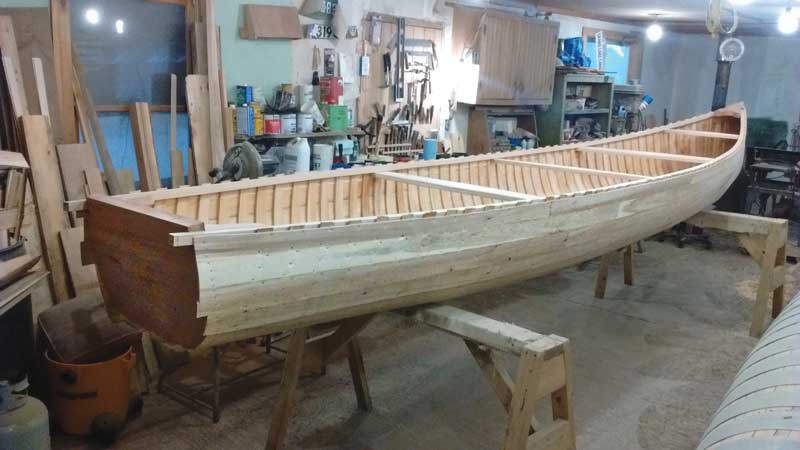 Dale Tobey wraps his hulls with two layers of six-ounce cloth filled with epoxy, whereas Shamel still covers his with a waterproofed canvas in the traditional method. Decks, outer gunwales, and thwarts might be made of ash, though mahogany or cherry is used for a superior finish. Lastly, the painstaking cycles of sand, paint, and varnish are undertaken. Grand Laker hulls are almost always painted forest green.

“There have been a lot of builders over the years,” said Tobey, “a lot of good builders.” Tobey, 61, who moved to Grand Lake Stream in 2000, spent childhood summers visiting his grandfather, a local guide and camp owner. He usually constructs two or three new boats each winter, and restores eight or nine. He guides for fishing in the summer and for bear hunting in the fall.

While new builders have entered (and exited) the regional building community over the decades, much of their subsequent efforts have remained strongly linked to the work of the original families. To this extent, Grand Lakers have a similar look that might lead the untrained eye to generalize, yet builders and guides can differentiate by looking at subtle details such as a boat’s profile or the thickness of its ribs.

Amazingly, the story of Shamel’s inherited boat mold is not unique; many of the original molds remain in the hands of second and third generations.

The late Sonny Sprague was a legendary guide and builder who learned the building trade from his father Bill—another of the builders associated with the design’s beginnings. Gagner builds part-time on Sonny’s 1948 mold, which is based on the family’s 1927 original. At 70, Gagner also still guides, though nothing close to his heyday when he was on the water 100 days in a summer.

“Sonny taught me a lot,” said Gagner. “He never graduated high school, but he was so clever. He could build a canoe in a week. It takes me three.”

When constructing his mold, Tobey took the lines off a Kenny Wheaton design. Wheaton, who died in 2004, built over 150 Grand Lakers in his lifetime and was a nephew to Arthur, another of the design’s founding fathers. Chris, Kenny’s son and longtime building partner, who also lives in Grand Lake Stream, now owns the Wheaton mold.

Over the years, Grand Laker designs have trended larger to accommodate an increase in client stowage and the onset of the heavier four-stroke outboards. Tobey took this into consideration when building his mold. He universally increased his hull by about an inch. Additionally, he added a 1¼" spray rail to the hull, which keeps the interior dryer and adds stability. He also straightened his profile by moving his deck plate farther forward. 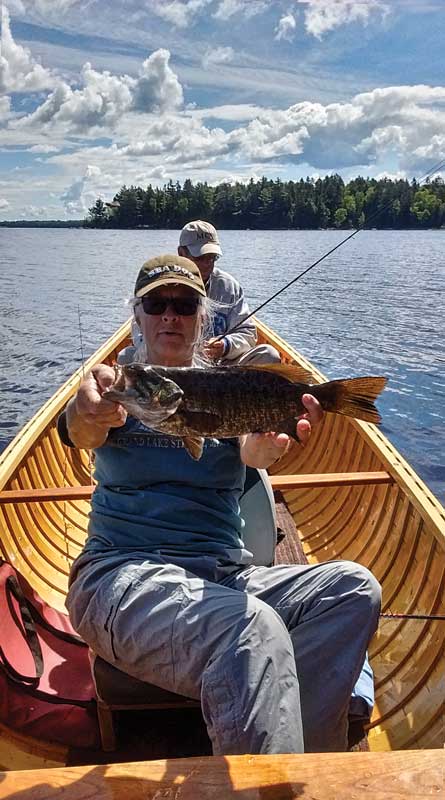 Dale Tobey’s clients fishing on Spednik Lake. Most of Tobey’s 60 days of guiding are spent bass fishing. Average sized bass run 14-16 inches and the larger ones run 18-20 inches. Photo courtesy Dale Tobey As the designs grow, one of the tricks is to maintain the Grand Laker’s signature blend of aptitude at outboard speed and responsiveness to the paddle. In the 1980s, Gagner and Sonny added rocker (curvature of the hull) back into the Sprague design to make it easier to paddle.  For bass fishing in June it’s common to cross the big lakes under power and then spend the day fishing (and paddling) the shoreside spawning grounds.

Before the advent of the outboard motor, guides were known to rely on a steamboat shuttle to access the near-infinite granite coves of the 14,000-acre West Grand Lake.

Tobey and Gagner source much of their cedar and ash regionally (Tobey has his own band-saw mill) thanks to craft wood permits granted to local artisans by the Downeast Lakes Land Trust. The craft wood permits are free to local wood workers and allow them to petition for the cutting of specific trees within the Downeast Lakes Community Forest, a 56,000-acre tract managed by the DLLT that surrounds West Grand Lake.

When it comes time to pull a hull off a mold or to clinch the tacks on a finished hull, Tobey and Gagner call on each other for help. The two make light of the cloistered history. Tobey notes how the old-timers were ever welcoming to shop visitors.

“The old builders would put down their tools and talk for hours, but they wouldn’t work in front of you.”

Similarly, Gagner recalls teasing his father-in-law.  “I used to tell him, ‘if you guys got together you could make a real business of this.’”

Tobey’s openness has led him to teach. Shamel also has taught, at the WoodenBoat School in Brooklin and out of his shop in Grand Lake Stream. His son works in a boatyard in southern Maine and grew up holding the clinching iron for his grandfather. When the time comes, the family mold will be passed on to him.

Gagner also expects one of his sons to take over their family’s mold.

“Part of why I build is to keep it alive,” explained Gagner. “I’ve never had anything but a Sprague canoe.”