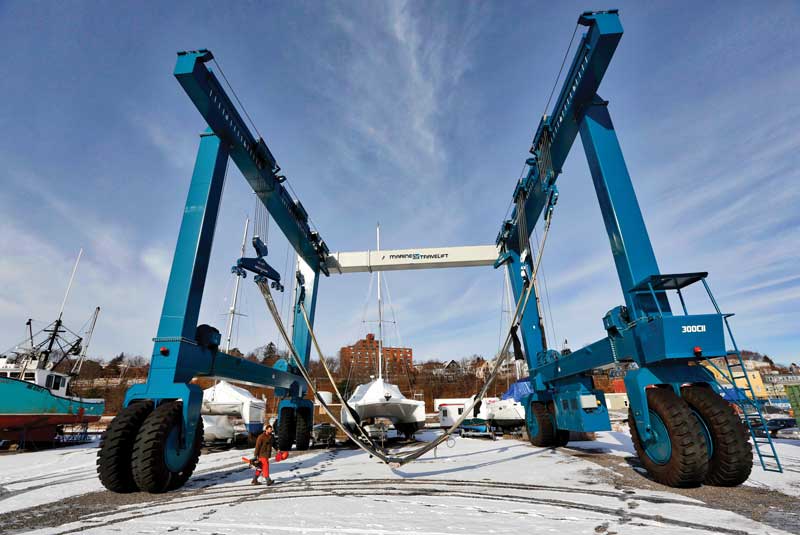 Quickie repairs for even the biggest recreational and commercial boats now can be done on short notice at Portland Yacht Services thanks to a huge new Travelift.

Sporting a new address in a new spot along the waterfront, Portland Yacht Services/Portland Shipyard is filling in all sorts of boating gaps: big, little, old, new, conventional and offbeat, commercial and recreational. With nearly 17 acres of Portland waterfront to reclaim and revitalize, the company is aiming to be nothing less than the hub of boat repairs and services in the greater Casco Bay area.

“Before we came here,” noted Phin Sprague, the owner-architect of the new digs, “if you had a really big boat, your only options were to go to Gloucester (Massachusetts) or up to Penobscot Bay. Now, we can work on any boat our Travelift can handle.” And that new, three-story Travelift can handle boats of up to 330 metric tons and with a beam of up to 42 feet (12.8 meters), a capacity that made Sprague smile every time he mentioned it—which was often.

Until recently, the activities of 38-year-old Portland Yacht Services were located at the outer end of Portland Harbor at the Portland Company Marine Complex. The 9-acre site featured busy piers and historic brick buildings where the Portland Company once built railroad equipment. Sprague sold that property in 2013 to a group of developers. He had planned to move his business to a new site up the harbor, but was set back when the Maine DOT took most of that land through eminent domain for an expansion of the International Marine Terminal. Instead Sprague moved his yard a little bit farther up the Fore River to former industrial land, just upstream from the Casco Bay Bridge. PYS began setting up its new operations in 2015. 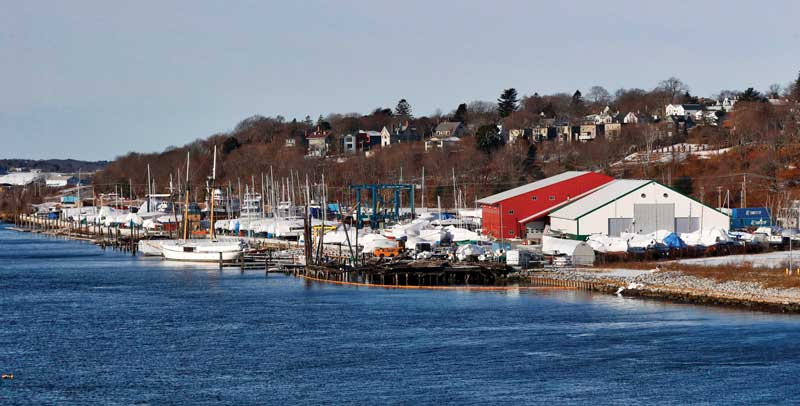 Quiet waters well away from the hubbub of Portland Harbor are the hallmark of PYS/Portland Shipyard’s new 17-acre site, just west of the Casco Bay Bridge.

Among other things, the expansive new location offers better protection from wind, seas, and the relentless wakes of passing ships than did the old yard. But even with all the extra space and hauling capacity, PYS has not aimed solely at superyachts and big commercial fishing vessels. Since the move, Sprague and his crew of some 40 employees have renewed a focus of working on outboards, with an added emphasis on high-speed, tournament bass boats.

“These people are just as passionate about their boats as anyone,” Sprague noted. “Maybe more so.”

A recent stroll amid the more than 230 boats hauled out for the winter at PYS turned up an eclectic mix of Boston Whalers and glittering bass boats amid large commercial ferries and excursion boats, along with the usual mix of sail and powerboats of every size and description, including old wooden schooners. “We’ll work on anything,” Sprague said. “We like boats more than we have good sense.”

In early 2019, work on PYS’s new facilities continued, with groundwork laid for adding three new buildings of 4,800, 19,800 and 13,500 square feet. Add those to the two sprawling buildings already on the site and PYS will be able to boast of two acres of enclosed space, most of it designated for working on and storing boats—and also for displaying boats in a new brokerage facility.

Sprague has been fascinated by Portland Harbor since the early 1970s when he was in town provisioning an aging wooden schooner for his dream-of-a-lifetime, circumnavigation of the globe. In those days, the harbor was a dirty, rundown backwater that few recreational boaters wanted to visit. Even the Portland Yacht Club had moved out, relocating to cleaner waters in nearby Falmouth Foreside. 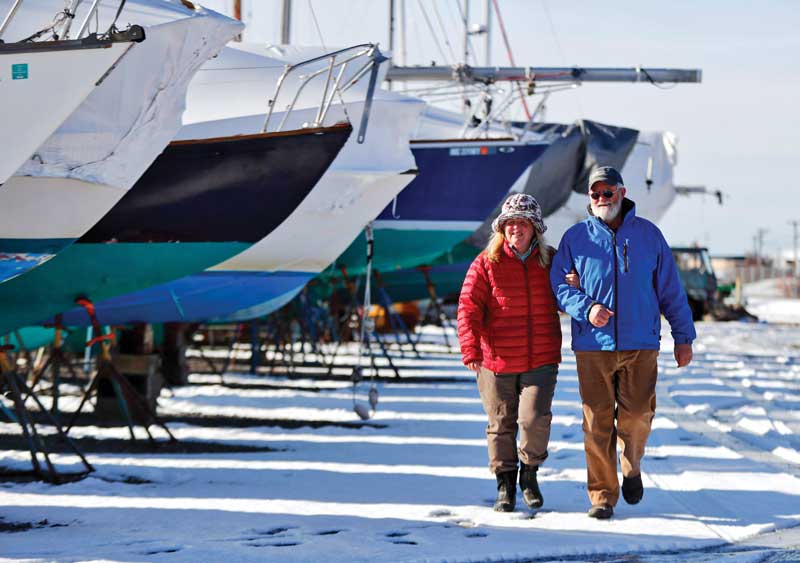 Phin and Joanna Sprague started Portland Yacht Services in a barn in Cape Elizabeth almost 40 years ago. “We do this together and are rarely more than a boat length apart,” Phin Sprague said.

A native Mainer, Sprague grew up on Cape Elizabeth, where a Sprague ancestor, who earned a fortune in the oil and coal business, had acquired a lot of land. During his circumnavigation, he couldn’t get his home state’s biggest harbor out of his mind. Far-flung, more exotic ports made no difference. Portland was the one. So, when he and Joanna, whom he met and married during his sailing trip, returned four years later, the forerunner to Portland Yacht Services was born in a barn in Cape Elizabeth. Joanna, who was trained as a nurse, has been an equal partner in the business from the beginning.

“I look at the horizon; she looks at my feet to keep me from tripping,” Sprague said of Joanna. “We do this together and are rarely more than a boat length apart.”

The couple soon moved PYS to the Portland Company site in the East End, and, then in 2015 moved the company to its latest iteration in the city’s West End.

“This is just full of possibilities,” Sprague said, waving a hand at the rotting pilings near the new, 1,000-foot expanse of working dock space. A swimming pool-sized test tank for outboards, a hauling ramp for strap-sensitive hull shapes, and a second, smaller Travelift for modest-sized boats round out the current array of large, boat-servicing “tools” at PYS. “We expect to be able to haul and service 350 boats here and more when you count just the service jobs,” Sprague estimated.

In addition to the yard and all its business, the company also puts on the annual Maine Boatbuilders Show, which began at the old site in 1987 and was moved to the Portland Sports Complex in 2016.

With all that activity under way, the 69-year-old Sprague depends increasingly on his vice president for operations, Jason Curtis, to keep both PYS and Portland Shipyard (same site and facilities) operating smoothly. With more than 20 years’ experience at PYS, Curtis said the goal is to “handle anything that comes through the door. Little jobs, big jobs, it doesn’t matter. We want to do them all.”

Curtis’s hands-on background is in outboard motors, so he was especially excited about the new bass boat aspect of the business. He is a confessed “motor head,” who can chat eloquently, and at length, about the evolution of nautical propulsion during the last 30 years. As a result, there are no less than four outboard specialists on staff, all of whom can work on inboards, as well.

Employees with multiple skills have been a hallmark of PYS for years. “It’s a point of pride that we’ve never had to lay anyone off,” Sprague said, noting a rigging specialist might find herself helping out in the paint shop when sailboat work becomes seasonally scarce. Likewise, a diesel mechanic can find himself working on gasoline, an electronics expert temporarily rerouting plumbing, and so on. “We have to adjust to the rhythms of the boatyard and the boats,” Sprague said.

The temporarily gritty appearance of under-construction PYS hides in plain sight what most boat owners want: one-stop care for a boat of essentially any description. With its neighbors of a still-active railroad freight yard, busy interstate highway connections, and an international, deep-water shipping terminal, PYS appears positioned—literally and figuratively—to once again make Maine’s biggest city a go-to destination for both recreational and commercial boat owners.