To experience all the beauty and adventure Maine has to offer necessarily requires spending a lot of time in or near water. To fully engage with this landscape—swimming, fishing, boating, or simply exploring the state’s rugged coastline with its many offshore islands or one of the hundreds of ponds, lakes, and river—means getting wet.

Those of us who are fortunate enough to live or spend time on a Maine lake or pond are familiar with the summer joys of diving off a dock into cool water or whiling away an afternoon wetting a line for trout or watching loons from the vantage of a kayak. But along with these pleasures come some of the creepier aspects of our freshwater gems, aspects which may still lurk on the dark edges of our childhood memories. I’m thinking of leeches, snapping turtles, dock spiders, and water snakes. I’ve harbored such fears myself. But as a biologist, I’m here to tell you they aren’t as bad as your imagination may have made them out to be. 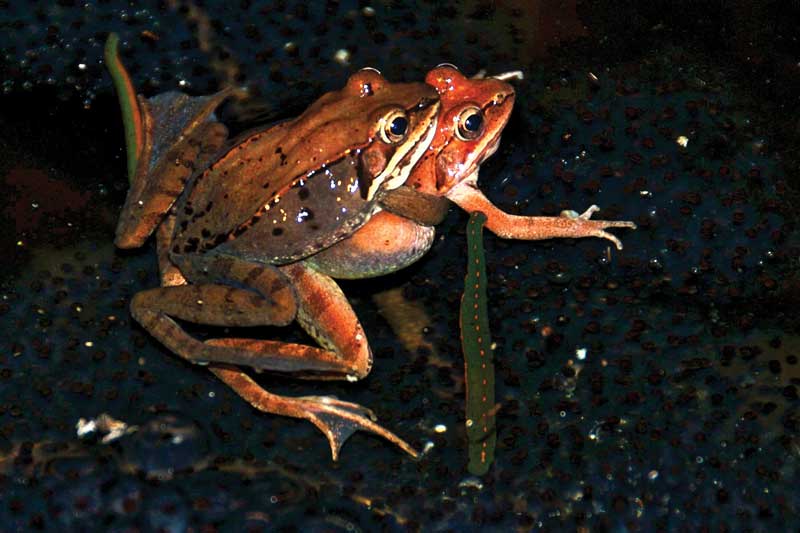 Leeches feed opportunistically on vertebrate blood. The attached leeches here (upper left and on the right) are taking advantage of a distracted pair of breeding frogs. Photo by Ed Minot

As a youngster, I carried a salt shaker in my lunch bucket on swim outings in the Belgrade Lakes. I endeared myself to many screaming girls by sprinkling salt on the leeches stuck to their legs, arms, and other body parts. I’ve since learned that removing leeches with salt causes them to regurgitate stomach contents into the open wounds they’ve made in your flesh. Now leech experts recommend gently prying the parasites free or sliding a thin card under their biting parts.

Maine is home to a variety of leeches. Most species feed on worms, snails, insect larvae, and other small aquatic animals, but a few species, if given the opportunity, will also feed on human blood. The best-known leech found in Maine is the common and widespread Macrobdella decora, the North American medicinal leech. It’s a fascinating, slimy, four-inch blood sucker with a beautiful bright-orange underside and an olive upper surface highlighted by a row of central orange spots. These leeches are a marvel of evolution, sporting five pairs of eyes, three sets of jaws with very fine teeth, and saliva that contains anesthetic and anticoagulant properties. I’ve removed many leeches from my lower body, including several that were engorged to the size of link sausages.

Leeches are typically found in shallow, protected waters, concealed among aquatic plants or under stones, logs, and other debris. They are attracted to water disturbance around docks and swimming areas. Leeches are most active on hot summer days. In winter, they burrow in mud just below the frost line. 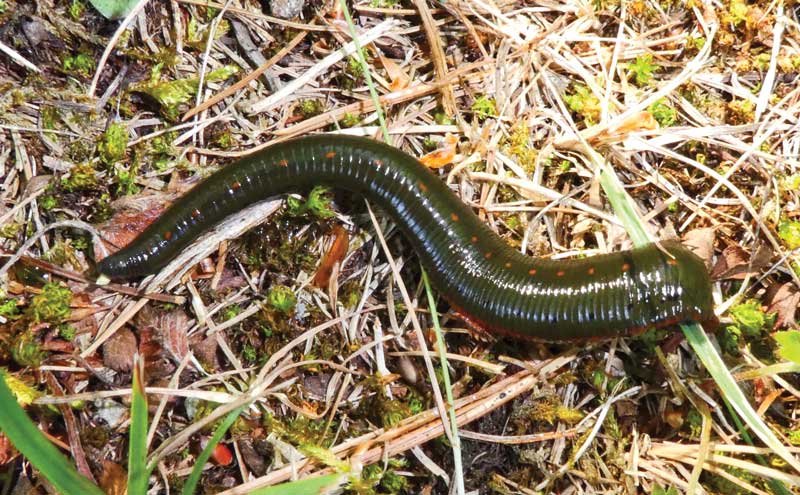 Maine is home to a variety of leeches, including the common and colorful Macrobdella decora—North American medicinal leech. Unlike deer ticks, leeches are harmless to humans. Photo by Nathaniel T. Wheelwright

The name “medicinal leech” originates from practitioners of early medicine who employed leeches for bloodletting and alleged “blood cleansing.” Its anticoagulant was once extracted for use in dialysis. Today, leeches are listed by the Food and Drug Administration as an approved medical tool to drain excess blood from injured tissue, to aid blood flow to damaged tissues, and to help with the healing of surgically reattached toes and fingers.

Another positive: Unlike ticks, Maine leeches do not transmit diseases. Contact with an occasional leech is the price of admission for swimming in Maine’s many beautiful ponds and lakes. 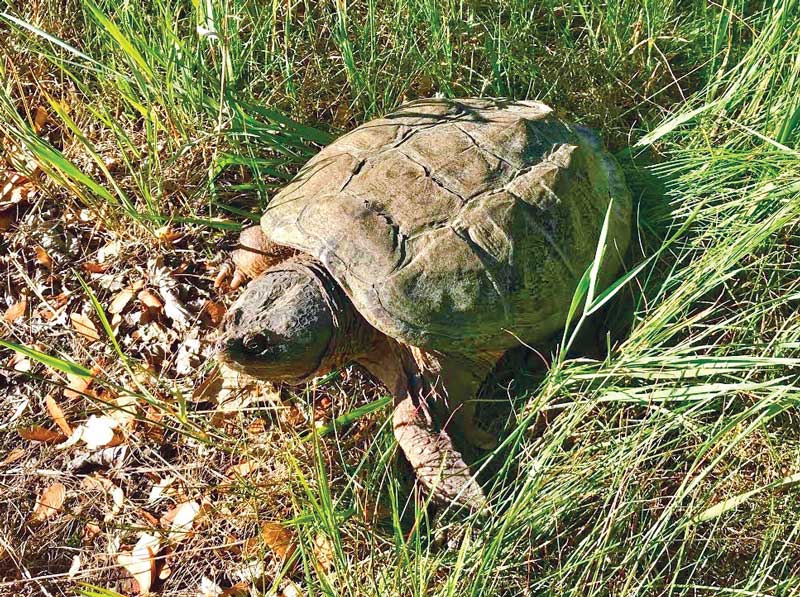 These creatures are living dinosaurs, unchanged over the past 60 million to 100 million years. They are prominent residents of many water bodies. One May day, with spare time after stacking four cords of firewood, I built a sandbox at my home on the shores of Shirley Pond near Moosehead Lake. Elsie Phillips, my widowed elderly neighbor, eyed me suspiciously, knowing that I lived alone. “Elsie,” I said, “the sandbox will hopefully attract a few gravid snapping turtles.” A nature lover, she asked if it would work. “We’ll know in a few weeks,” I replied. In early June, she phoned me at my wildlife biologist office in Greenville. “I couldn’t wait until you got home,” she said excitedly, “there’s a snapping turtle digging a nest in the sandbox.” Weeks later, we watched tiny hatchlings walk unsteadily into the pond. Before Elsie died in 1999 at age 94, we joked that snapping turtles were the catalyst for our friendship. 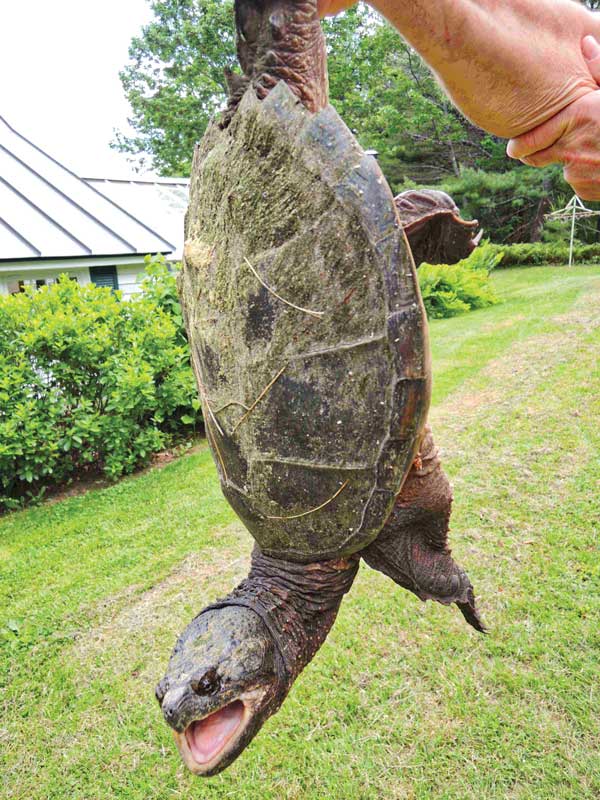 Rescuing snappers is best done by grabbing the tail, holding the animal at arm’s length with the plastron (underside shell) facing one’s body. To avoid injury, do not hold it by its shell or with its carapace (upper shell) facing you. Photo by Nathaniel T. Wheelwright Today, two decades after Elsie’s death, each sighting of a nesting snapper reminds me of her. The ancient creatures are largely inconspicuous on Maine ponds, occasionally popping their heads above water to breathe before slipping under the surface. Females are commonly seen in June when they cross roads in search of ideal nest sites—sunny, sandy shoulders of roadways near water bodies. Excavating nest cavities with clawed hind feet, they deposit 20 to 40 spherical, leathery white eggs. Studies indicate that more than half their nests are destroyed by scavenging raccoons, skunks, foxes, coyotes, bears, and ravens. Hatchlings emerge following an incubation period of about two weeks. Ambient temperature determines the length of incubation and, interestingly, the sex of the hatchlings. Warm temperatures during early embryo development favor females; cooler temperatures translate to mostly male hatchlings. Eggs near the warmer top of the nest are more likely to produce females, whereas cooler eggs at the bottom of the pile are more likely to hatch males. While it is uncommon, some snapping turtle eggs laid in cold Junes occasionally overwinter and hatch the following year.

Although large—formidable males can live to be 50 or more years old and weigh upward of 60 pounds—snapping turtles are shy and do not pose a threat to swimmers. However, both males and females are aggressive when molested. As their name implies, snapping turtles can deliver powerful, painful bites. They’re opportunistic omnivores, feeding on succulents, crayfish, suckers, yellow perch, hornpout, and many other organisms. Ducklings are a favorite food item. It’s not uncommon to observe a brood of 10 ducklings reduced to a mere few during a two-week span. As a rule, though, snappers are harmless if unprovoked by people and dogs.

Tips on handling snapping turtles: Good Samaritans are injured each year while rescuing snapping turtles that are crossing heavily trafficked roadways. To avoid injury, don’t pick up snappers by the carapace (upper shell). Instead, grab the tail, holding the turtle out at arm’s length, with the plastron (underside shell) facing your body. Snappers have very long necks, long and sharp claws, and powerful jaws, so holding one so it faces away from you greatly reduces the odds of being bitten or clawed. 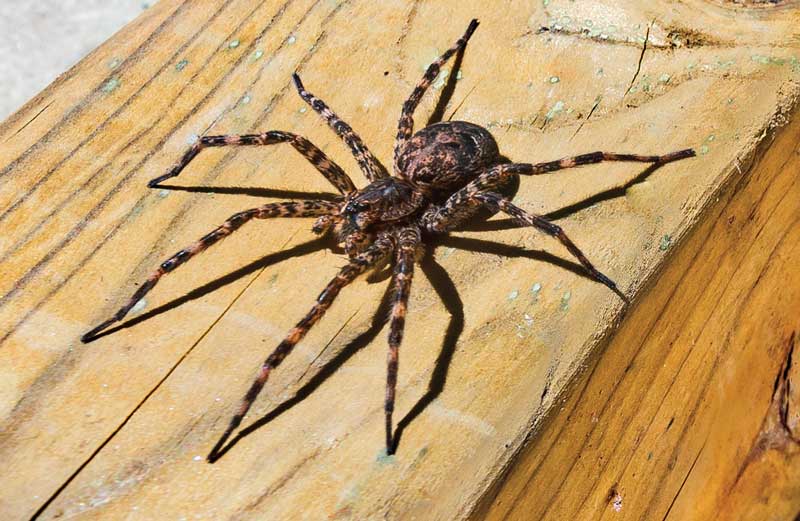 Dock spiders are among Maine’s largest spiders, approaching four inches in length. They’re non-aggressive except when defending a nest with eggs.

We’ve all been startled by them. And if you’re an arachnophobe, dock spiders will heighten your fears with their large size, multiple hairy legs, impressive fangs, and numerous sets of eyes. A female’s dual-purpose fangs are used to subdue prey, as well as to shield her egg sac. She commonly places her eggs in dock crevices and protects them with a web. She then aggressively stands guard until her hundred or more young hatch.

Dock spiders (Dolomedes sp.) are among Maine’s largest spiders, approaching four inches in length. They’re slightly larger than wolf spiders, a close terrestrial relative. Dock spiders are an evolutionary marvel, capable of diving and remaining underwater for several minutes while searching for minnows, mayflies, tadpoles, and other prey. Like Maine’s predacious diving beetles, dock spiders remain under water by carrying their own oxygen supply in air bubbles trapped by their hairs. Conversely, by distributing their weight evenly, they are also able to scurry across the water’s surface without sinking.

Above or below water, their prey is paralyzed by venomous bites. Fortunately, dock spiders are mostly shy, hiding when people are near. Female spiders guarding eggs and young, however, have bitten people that stray too close. But attacks are uncommon and the venom is harmless, except for some people who develop allergic reactions. To avoid spider bites, don’t grab or otherwise threaten this formidable arachnid. 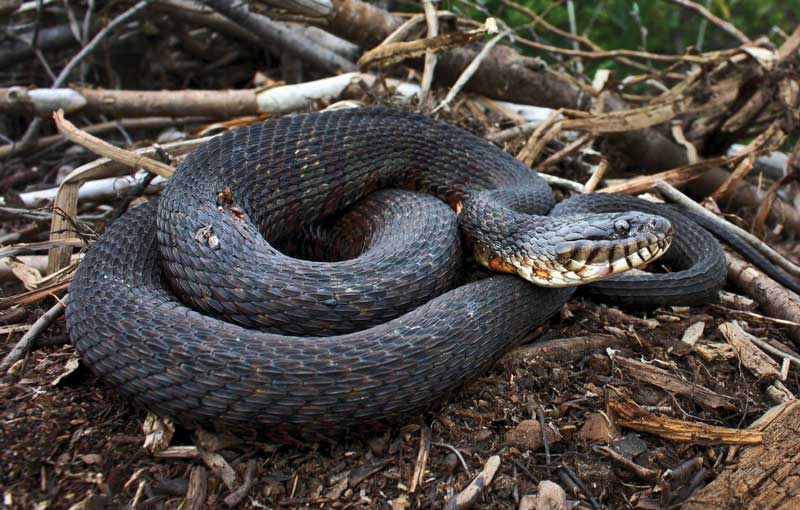 A northern water snake sits atop a beaver dam. Photo by Trevor Persons

In Maine, this fairly large snake reaches its northern range limit in central Maine. Preying on fish and amphibians, the species (Nerodia sipedon) is often found in bogs, swamps, cattail marshes, and wet meadows, according to the Maine Department of Inland Fisheries and Wildlife. And though they are not poisonous, they can deliver a painful bite.

Like dock spiders, water snakes often seek shelter beneath docks and floating wharves. Growing to a maximum length of 3.5 to 4 feet, they are one of Maine’s largest snakes. Most swimmers encountering this snake are terrified because it can be aggressive when threatened. As with all Maine’s snakes, though, water snakes are non-venomous. Nonetheless, I learned firsthand as a child, after grabbing one by the tail, that water snakes can deliver a nasty bite.

Collecting and identifying snakes, turtles, frogs, salamanders, bird nests, and wildflowers on my grandparents’ dairy farm are among my fondest childhood memories. Being stung by a sleeping bumblebee on a black-eyed Susan, though, taught me a valuable life lesson: if I left critters alone, they’d leave me alone.

The feathery red wreath around the mudpuppy’s head are external gills. Photo by Trevor Persons

They don’t bite or sting, but this invasive species appears to be expanding its range and multiplying in Maine lakes, which makes them monsters in the eyes of state wildlife biologists. We’re talking about the very large salamanders commonly known as mudpuppies.

Entirely aquatic, with external gills, four legs and a long tail, mudpuppies typically are a foot long, but can grow to be as long as 16 inches, according to state wildlife biologist Phillip deMaynadier.

Although mudpuppies are native to many freshwater bodies in the Eastern United States, they were introduced accidently to Maine in 1939 by a Colby College professor who was doing research. The creatures were in a cage in a tributary of Great Pond and escaped when the cage was damaged during a storm, deMaynadier said. Current research indicates they may have spread since then to 14 bodies of water in Central Maine. Wildlife biologists have heard from fishermen who contend mudpuppies interfere with gear and may be competing with game fish for resources. Since 2017, the state of Maine has had a research project underway to assess the ecological effects of the big salamanders, as well as their range, deMaynadier said. The study includes trapping the amphibians and analyzing the contents of their stomachs. Preliminary results indicate the mudpuppies’ diet includes crayfish, mayflies and dragonflies, amphipods, snails, mussels, worms, fish, and plant matter.

While most of the expanded range seems to include connected bodies of water, some mudpuppies have been found in completely unconnected watersheds, leading to speculation that they may have been transported by fishermen using them as bait, or carried by birds such as eagles and ospreys.

“We don’t know yet how much ecosystem damage they are doing,” he said. “We do know they don’t belong and in most cases when something doesn’t belong there is a cascading effect on other native fauna.”

DeMaynadier urged any fishermen who catch a mudpuppy either to put them back where they were caught or to kill them. “But don’t take it home and don’t move it from one water body to another.”