Traditional red, wintery white or a variety of colors in between,
the holiday poinsettia takes a little care and delivers a lot of seasonal color. Photo: Lynette L. Walther

These days they come in nearly every color, size, and shape imaginable.

Whether they are coated with sparkles or sprayed in hues from purple to orange or remain the traditional bright red, the plant we know today as the poinsettia has a long and interesting history. Native to Central America, the plant flourished in an area of Southern Mexico. The ancient Aztecs put the plant to practical use. From its bracts they extracted a purplish dye for use in textiles and cosmetics. The milky white sap was made into a preparation to treat fevers. The poinsettia might have remained a regional plant had it not been for the efforts of Joel Roberts Poinsett (1779-1851). Poinsett was appointed as the first United States Ambassador to Mexico (1825-1829), and later founded the Smithsonian Institution. Poinsett had attended medical school, but his real love in the scientific field was botany. 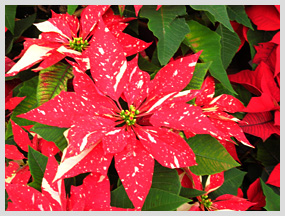 Speckled Poinsettia. Photo: Lynette L. Walther
Poinsett was enchanted by the brilliant red blooms he saw south of the border. He immediately sent some of the plants back to South Carolina, where he began propagating the plants and sending them to friends and botanical gardens. The poinsettia was first introduced into cultivation and commercial trade by Bartram’s Garden on June 6, 1829 at the first semi-annual exhibition of fruits, flowers and plants, of the Pennsylvania Horticultural Society. The Paul Ecke Ranch is one of the largest breeders and suppliers of holiday poinsettias. 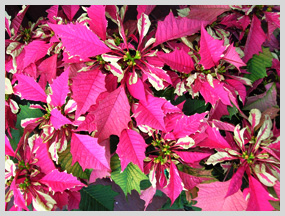 Poinsettias are not poisonous. For nearly eight decades, this rumor has continued to circulate because of one unfounded story in 1919: that an Army officer’s two-year-old died after eating a poinsettia leaf. While later determined to be hearsay, the story took on a life of its own.

Defenders of the poinsettia have pulled out all the scientific stops to allay public fears. The Society of American Florists (SAF) worked with the Academic Faculty of Entomology at Ohio State University (OSU) to exhaustively test all parts of the poinsettia (Euphorbia pulcherrima). OSU researchers established that rats exhibited no adverse effects — no mortality, no symptoms of toxicity, and no changes in dietary intake or general behavior patterns — when given even unusually large amounts of different poinsettia parts.

When transporting a poinsettia, use a large, roomy shopping bag to protect your plant and prevent exposing the plant to chilling winds. Place the poinsettia in a sunny window, but do not let any part of plant touch cold window panes. Provide room temperatures between 68-70° F. Generally speaking, if you are comfortable, so is your poinsettia. Don’t expose plants to temperatures below 50° F. Poinsettias are sensitive to cold, so avoid placing them outside during the winter months. Conversely, high temperatures will shorten the life of the colorful bracts. Water your plant when the soil feels dry to the touch. Be sure to remove foil that covers drain holes before watering. Do not let the poinsettia wilt or sit with water in the saucer. Empty the saucer. Always remove a plant from any decorative container before watering, and allow the water to drain completely. 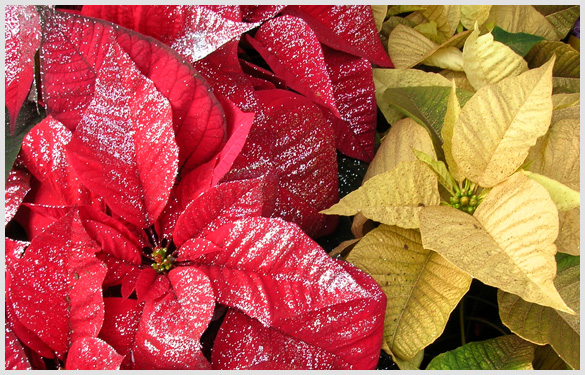 Fertilize the plant AFTER the blooming season with a balanced, all-purpose fertilizer. Move the poinsettia outdoors when all danger of frost has passed. Place it in a sunny area where it will get moderate shade in the afternoon. Trim as necessary. Fertilize once a month with a water soluble houseplant fertilizer. To get a poinsettia to re-flower you have to place the plant in total darkness between 5 p.m. and 8 a.m. Start this around October 1 and continue until color shows on the bracts; usually around early to mid-December. The least exposure to light can prevent flowering. Covering the plant with a light-proof bag and placing it in a closet should work. Nighttime temperatures above 70-75°F can delay or prevent flowering.