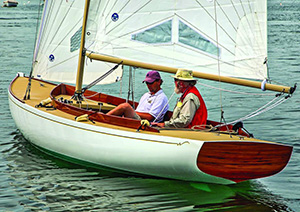 Designed for W-Class Yacht Co. and built by Artisan Boatworks, hull no. 1 of the W-22, known as Filly, went in the water for her first sail in June with Alec Brainerd as crew and Donald Tofias at the helm. Photo by George Bekris
Donald Tofias, the visionary behind some of the most gorgeous cold-molded wooden yachts built in Maine in recent years, is at it again. To date Tofias and his W-Class Yacht Co. have dazzled the sailing world with a matched pair of 76-foot sloops, a varnished mahogany 37-foot-long (if you don't count the stylish bowsprit) pace-setter, and after a launching this summer at Rockport Marine, four identical 46-footers. His newest project is a 22-footer, whose lines have been adapted from Joel White's double-ended Lala, design No. 47. It's always a kick to talk with Donald about boats. He happens to be one of the few people I know who's as crazy about boats as I am. Plus, he tells a great story. Tofias' goal with his first yachts, the W-76s, was to bring back the Golden Age style of racing in America. They were intended to be a modern version of the big gaff topsail sloops sailed in the early 1900s. During my discussion with Tofias we both speculated that one reason his vision of modern "big-class" racing hasn't fully taken off is because as majestic as his original thoroughbred horses were, perhaps they weren't quite big enough. (He is currently promoting a W-100 one-design class.)
The W-22 will be a starter boat, something at the more affordable end of the sailing spectrum, but with a wooden boat's unique panache.
The W-22's origins stem from the Golden Age of Yachting as well, but in a different way. 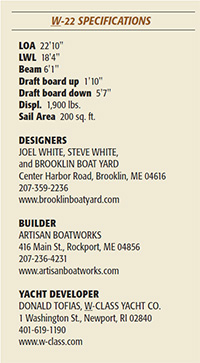 One day several years ago when Donald was browsing in an antiques store in Palm Beach, Florida, he found an old postcard showing nearby Lake Worth Lagoon during the early 1900s. The view included a fleet of gaff-rigged catboats, sailed by stylish sports and sport-esses, dressed in the modest sartorial styles of that era. Tofias was particularly intrigued by the boats because they were very similar to the Cape Cod catboats he'd grown up with at Monument Beach, Massachusetts. The itinerary that day led Tofias to the causeway that crosses Lake Worth. He saw many expensive homes along the shore, but aside from a few rather hideous powerboats, the lagoon was devoid of sail. If you're someone like Donald Tofias that type of scenario starts the wheels turning. The W-22 will be a starter boat, something at the more affordable end of the sailing spectrum, but with a wooden boat's unique panache. Tofias expected to price the boats after the first boat is launched. 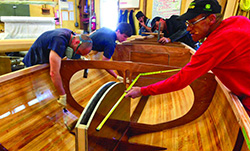 While the crew measures for deck beams and the centerboard trunk cap, the inside of the hull receives three coats of West System Epoxy, and then six coats of Epifanes varnish. Courtesy Artisan Boatworks
What's seductive about the design is the ability to sail in extremely shoal water. As Tofias pointed out, there are many places, like Lake Worth, where million-dollar-plus properties border shallow water-Nantucket, Barnegat Bay, and Edgartown in Massachusetts, Watch Hill, in Rhode Island, Sarasota, Florida, and a dozen similar locales. Tofias loves Joel White's style. White, who died in 1997, designed the 76s, and conceived of the 46s, whose drawings were done by Brooklin Boat Yard and Bob Stephens, now of Stephens Waring Yacht Design in Belfast, Maine. Stephens was the principal designer of the 37-footer.

Chad Myers installs laminated teak coamings. The plywood deck is sheathed in 10 oz. fiberglass/epoxy. Courtesy Artisan Boatworks
So it was natural for Tofias to look to White's work for the genesis of this new boat. One design that jumped to mind was design No. 47, a small double-ender called Lala. With crew aboard and the centerboard up, Lala could sail in less than two feet of water. More than 40 of these slippery canoes have been built of fiberglass, most of them called Sakonnet 23s. One thing of interest in Joel White's original construction plan is that he showed an alternative, transom stern. Tofias considered jumpstarting his design idea by buying a couple of Sakonnet 23s and just sawing off the stern. He quickly dropped that idea, though, because all along what he really wanted was a cold-molded wooden boat. The W in his company's name stands for Joel White, but it might as well also stand for wood.

Many elements of the W-22 were produced using computer-assisted cutting, to save time and ensure consistency. In this photo, one half of the deadwood with centerboard slot is being machined from a 4-inch thick laminated mahogany blank. Courtesy Hewes & Company
For the W-22, Joel White's original lines were tweaked by his son, Steve White, and the Brooklin Boat Yard Design Group, with help from Bruce Johnson, a designer who works with Front Street Shipyard in Belfast, Rockport Marine, and Brooklin Boat Yard on developing new boat construction projects. While some of Tofias' previous boats were built at Brooklin Boat Yard and some at Rockport Marine, the first two 22s are being built by Alec Brainerd and his crew at Artisan Boatworks in Rockport. If Tofias' dream for whole fleets of W-22s is to reach fruition, the boats must be competitive in terms of build-time. That's where computer-aided design comes in. These first two boats are being used to experiment with some nearly robotic construction methods. (Tofias does nothing by half-measures so he's having Artisan Boatworks build twin hulls that can be match-raced.) 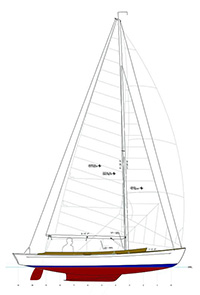 Lines of the W-22 were adapted from Joel White's double-ended Lala, design No. 47. Illustration courtesy W-Class Yacht Co.
Hewes & Company of Blue Hill, Maine, used computers to take over various time-consuming aspects of the boatbuilding work. When computers guide the cutting of things like side-decks or a transom, for instance, there's no need for a boatbuilder to head-scratch. Many man-hours also were eliminated in computer-guided shaping of the deadwood keel where it meets the hull. The lessons learned in this somewhat automated manufacture not only will make W-22s quicker to build, but they will serve the one-design principle of exact similitude among individual products. The W-22 will carry nearly 1,000 pounds of lead ballast and the centerboard is heavily weighted as well. But the W-22 only draws 22 inches with the board up and 5'7" with it down. With its narrow hull and lofty rig, it will be fairly tender if sailed in the windy Gulf Stream outside the Palm Beach jetties. But here's the genius: because of the W-22's shallow draft, it doesn't have to go offshore. W-22s can sail and race in places like inner Nantucket Harbor, where the wind is lighter. A hinged tabernacle mast will make the boat easier to trailer. Like Tofias' other yachts, these new boats will be gorgeous. There has been no attempt to hide the beauty of the wood. The seats, for instance, are not flat, but sculpted on top so as to be more comfortable and, frankly, more lovely under varnish. I can't help but hark back to the tastes of those straw-hatted dandies in the old postcard. They drove in fancy cars, with lacquered coachwork and no shortage of gleaming natural wood, and even tiller steering. Tofias has likely hit the mark with his sailing work of art. Refined people appreciate fine things, and the W-22 looks like it will be one of the finest little slippers afloat. Contributing Author Art Paine is a boat designer, fine artist, freelance writer, aesthete, and photographer who lives in Bernard, Maine.