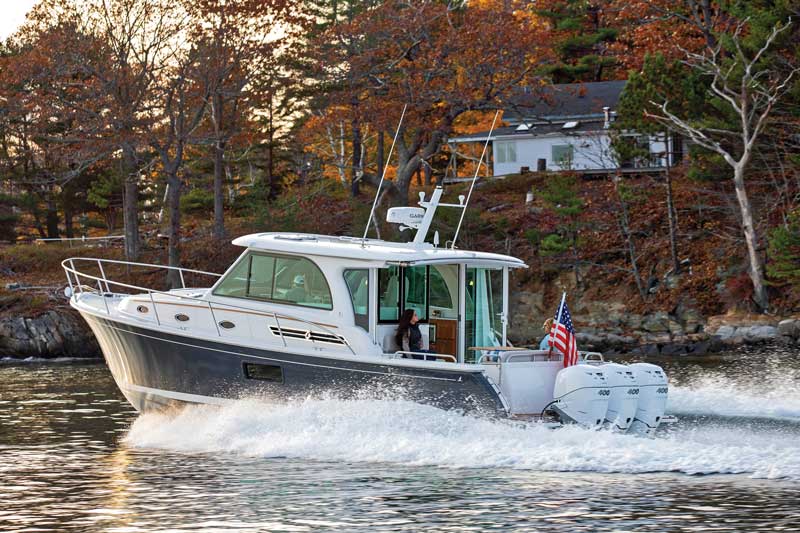 Putting the engines on the back of the Back Cove 39O opens up more room for living space aboard. The newly launched model is a bigger version of the company’s popular 34O model, which made its debut two years ago. The helm deck of the 39O is fully enclosed and climate controlled.

This has been a good year for boat sales as people discover the joy of escaping pandemic restrictions by taking to the water. The new Back Cove 39O is a good example. The prototype was launched just recently, in November, but the company has already had so many orders for the outboard-powered downeast cruiser that customers placing orders now will have to wait at least 12 months, according to Bentley Collins, vice president of sales & marketing for Back Cove Yachts and its corporate cousin, Sabre Yachts.

Built as is the entire Back Cove line at the company’s plant in Rockland, Maine, the 39O is a bigger version of the 34O, Back Cove’s first outboard model that debuted two years ago.

“As engine makers have come out with more and more powerful outboards, it makes sense to get the engines out from under the living accommodations and hang them off the transom,” Collins said.

Work on the new design began 18 months ago, in response to both the success of the 34O and the trend toward outboard propulsion in the cruising boat market, said Collins. Plans for a spring 2020 launch were delayed by the pandemic and a shortage of skilled workers.

Equipped with the optional triple Mercury 400 Verado outboards, the prototype Back Cove 39O exceeded expectations during sea trials in November. With a cruising speed of 34.5 miles per hour, the new boat has a range of over 300 nautical miles, and a top speed of 50.1 miles per hour, making this the fastest and quietest model in the Back Cove lineup. 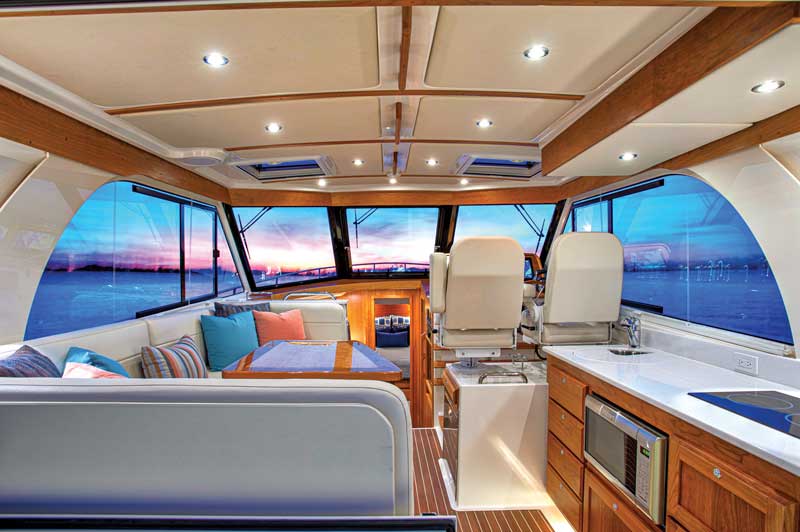 The salon area includes big windows, a galley, and side-by-side captain and mate seats opposite a settee.

The 39O hull design features Back Cove’s proprietary Trailing Edge Lifting Surface for optimal handling and performance. It has a fully-enclosed helm deck, which allows for comfortable cruising and an extended boating season. The salon-level layout features a galley-up design and side-by-side captain and mate seats opposite a U-shaped settee. Fixed glazed windows around the pilothouse create an airy space where those on board can enjoy an evening meal or take refuge from the elements.

Below deck, the lower lounge features an atrium-style opening to the windshield above, which floods this space with natural light. Guest quarters are located aft of the lower lounge, beneath the salon sole, and feature two single beds as well as an optional hull-side port light for added light. The master cabin features a queen-sized island berth, hanging lockers and shelves, and private access to the head and shower.

In the cockpit, transom gates to port and starboard provide access to a U-shaped settee across from an aft-facing seat and a central table. The lazarette storage below the cockpit is accessed through a large actuated hatch. The aft platform allows easy access to the triple outboards and swim steps.

Collins said that the past summer saw a huge boom in boat sales. That was good news for the Maine-based company and its fellow boatbuilders, but not so much for customers looking for new boats. “Inventory everywhere is way down and availability is very limited. It’s not just us; it’s everybody,” he said. “A whole year’s production of this boat at this point is already spoken for.”

The Back Cove 39O is expected to make her boat show debut in the spring of 2021.