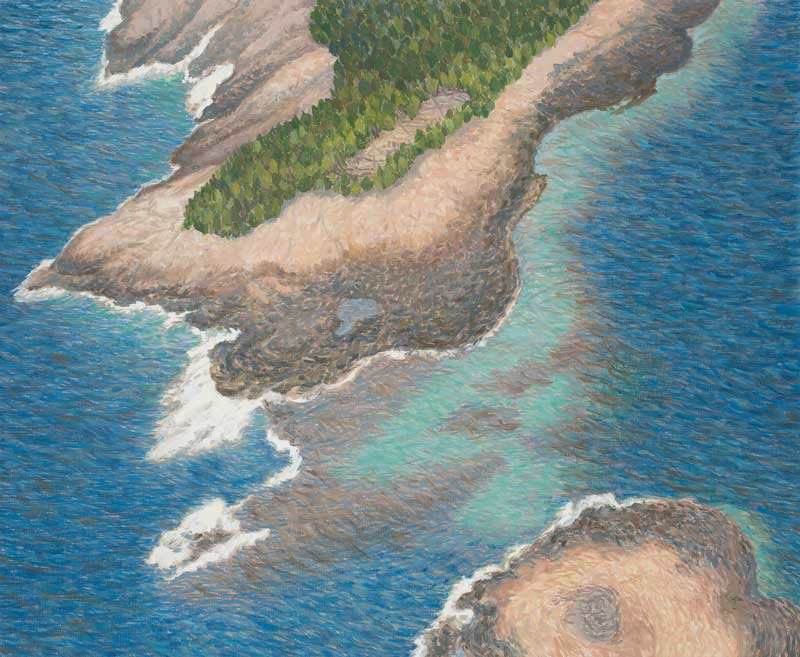 Jacquette took to the air to paint this view of the rocky coast of Isle au Haut. Barred Harbor, Isle au Haut, ME II, 2012, oil on linen, 44 by 53¼ inches. Courtesy the artist and DC Moore Gallery, New York 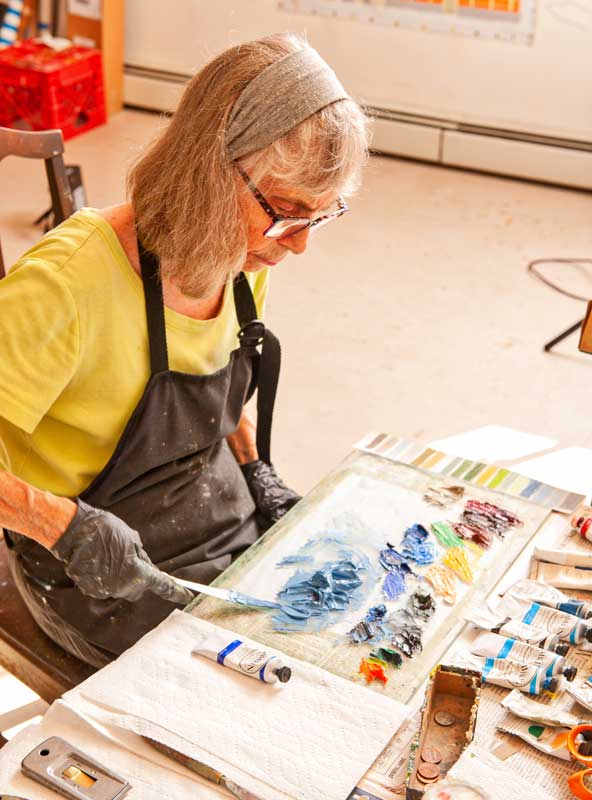 The painter prepares her palette in her Searsmont studio. Photo by Walter Smalling from At First Light: Two Centuries of Maine Artists, Their Homes and Studios, 2020 “What specifically attracts you to aerial views, to panoramas?” an interviewer asked Yvonne Jacquette a few years ago. “It started by going up in little airplanes in Maine,” she replied.

Encouraged to check out Maine from the air by art critic Peter Schjeldahl—he had raved about looking out over coastal reaches—Jacquette chartered a Cessna and set out to study the landscape from above. Her first experiences were not pleasant: She became dizzy, confused, and nauseous when she got home. “Why do I want to go up and do that?” she asked herself, but after the fourth or fifth trip, she managed to make a drawing of Ducktrap Beach “that wasn’t too terrible.”

Those flights over the midcoast led to Jacquette’s signature subject: the world viewed from on high. Pushing the bird’s-eye view tradition to new heights, she painted urban and rural landscapes based on studies made from elevated outlooks: planes (small and large), helicopters, tall buildings, including the Twin Towers, and the top of Mount Battie. Over time she became America’s preeminent aerial artist.

With a box of pastels balanced on her lap, Jacquette made quick studies or took photographs as she circled Skowhegan, Belfast Harbor, Vinalhaven, Maine Yankee in Wiscasset, Isle au Haut, Augusta, and other locales, sometimes at night. Occasionally she visited these places on foot to get a sense of the overall layout of the land and to help create the final design.

Back in her studio in Searsmont, Maine, Jacquette developed paintings from these sketches, photos, and observations, abstractions that maintain the essential arrangement of what she had cast her eye upon. In a style that bears kinship to precisionist and pointillist art, she transformed the landscape below her into shifting planes of paint strokes. Rooftops and roadways, water and land, display a dynamic energy that leads the eye across the painted terrain.

In contrast to the “speeding” quality of the work of another Maine aerial artist, Eric Hopkins, Jacquette says she slows things down. “I look, I see, I remember it, and then I draw it, and I try to make the viewer have an experience where they can stay in the picture, make a place on the canvas that one could explore, go from one color to another, from one texture to another.” 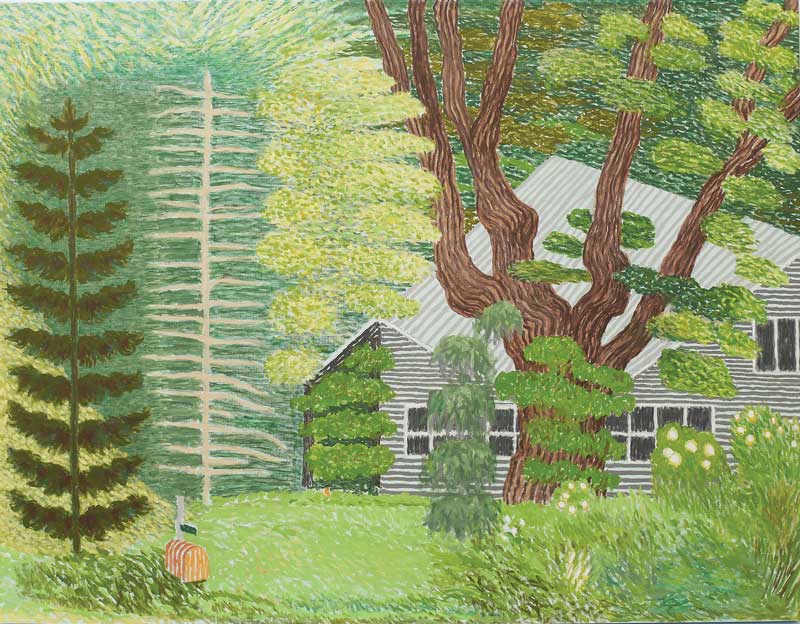 The home of the artist’s son and his wife is the subject of this painting. Tom and Kathy’s Summer House in Maine, 2020, oil on linen, 34 by 44½ inches. Courtesy the artist and DC Moore Gallery, New York

There is nothing vertiginous about these views. Even when Jacquette included the wing of a jet airliner in the composition, as she did in 1980s and 1990s, the visual impact was that of an ordered transcendence, the world outside the window arranged into becoming images. She was interested in fracturing the picture plane a bit, what she has described as “sort of a collage idea” (she considers herself a “would-be abstractionist”).

No matter where Jacquette found herself in Maine, she sought ways to ascend. Early on she flew with Maurice Roundy and Floyd Watts out of Belfast. When she taught at the Skowhegan School of Painting and Sculpture, she took off from Norridgewock Airport. Later she was a regular passenger of Sandy Reynolds (whose uncle was the poet Robert Creeley). She also hired photographer-pilot Benjamin Magro for helicopter forays, sometimes heading inland.

When Reynolds retired from flying in 2015, Jacquette pretty much stopped her airborne surveys in Maine. She loved the Cessna because the wings are above the windows, allowing a full view of landscape below. With none available, she climbed to the top of Mount Battie in Camden, sat on a rock, and started to draw.

While continuing to frequent tall buildings in New York City—she sometimes rented rooms in high-rise hotels—Jacquette looked for other points of altitude from which to paint. The initial study for Ocean View Wind Patterns, Camden, Maine from 2017 was made from the top of Mt. Battie where she could look down on Camden Harbor and Northeast Point. This stunning lithograph was printed in 11 colors from 10 aluminum plates hand-drawn and painted by the artist.

This past summer, limited in her wanderings by coronavirus constraints, Jacquette painted views from the window of her Searsmont studio or from the house across the road, where her son, painter Tom Burckhardt and his wife, sculptor Kathy Butterly live. These paintings return the artist to earth without sacrificing the vibrant quality of her vision. In Tom and Kathy’s Summer House in Maine, 2020, wonderfully stylized trees, including a large locust, shimmy across the picture plane. A striped mailbox echoes the lines of the roof and siding beyond.

Asked if she had considered using a drone, Jacquette replied in the negative. “I always wish to use what I can see.” 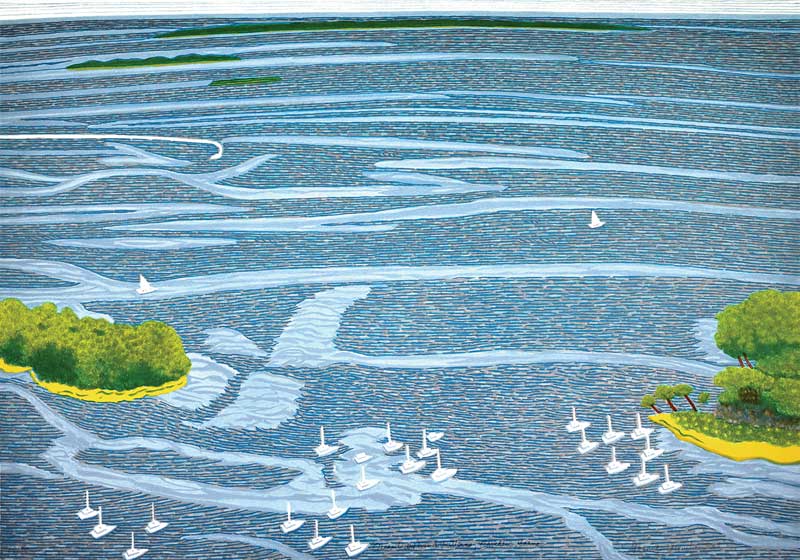 Born in Pittsburgh in 1934, Jacquette first came to Maine in 1954 while a student at the Rhode Island School of Design, visiting Ogunquit, Saco, and Wiscasset. She remembers visiting an area near the latter town that featured “huge rocks right at the ocean.” Seated in the winter sun, she made drawings.

Jacquette’s next visit to Maine came in what would have been her last year at RISD. She had loved studying with the painter Robert Hamilton (himself a Maine art legend) but said she left the school because of another professor’s negative attitude. She retreated to Monhegan in the summers of 1957 and 1958 and painted watercolors of ocean surf and other classic island subjects.

The Maine die had been cast. In 1965 Jacquette and her husband, photographer, painter, and filmmaker Rudy Burckhardt, and their friend, writer Edwin Denby, bought a house in Searsmont after spending parts of two summers in the area, including a stay with Alex and Ada Katz in Lincolnville  (see “Slab City Rendezvous” in MBH&H Issue #159).

As Jacquette related in a 2016 interview with then Colby College Museum of Art director Sharon Corwin, the place featured three key necessities: a house, a barn for a studio, and a lake to swim in—actually Lawry Pond. These days, Jacquette prefers to take her dips at nearby Levenseller Pond where it’s easier to enter the water (she broke a hip in an accident 10 years ago).

The Searsmont house is featured in a new book, At First Light: Two Centuries of Maine Artists, their Homes and Studios (Rizzoli), produced in conjunction with Maine’s bicentennial. It required a double-spread photograph by Walter Smalling to encompass the whole structure: a quintessential New England collection of connected buildings stretching across a sunny woods-encircled lot.

Jacquette and Burckhardt’s son Tom was born in 1964. Surrounded by artists as a child, he ended up following in his parents’ footsteps. His mother reports that he “tries one Maine view painting every summer,” but that otherwise his work is abstract.

Following her husband’s death in 1999, Jacquette continued the yearly New York City-Searsmont schedule, with occasional trips elsewhere. Her companion, architect Evans Woollen, whom she had met in Colorado, had a house at the south end of Isle au Haut, so she went there for many years. They also sailed. Last summer, she reports, only year-rounders were allowed on the island to prevent any spread of the virus. She misses the island and Woollen, who died in 2016.

“I love Maine,” Jacquette wrote in early December from New York City. She was working on a painting of the view from her apartment and thinking about returning to Searsmont next summer, where she will settle once more in her light-filled studio and create those landscapes that have made her one of America’s—and Maine’s—most brilliant painters.

Carl Little lives and writes on Mount Desert Island. He is a regular contributor to this magazine and to Working Waterfront, Art New England, and Hyperallergic.