The ocean is awash in viruses, many of which are essential to life as we know it 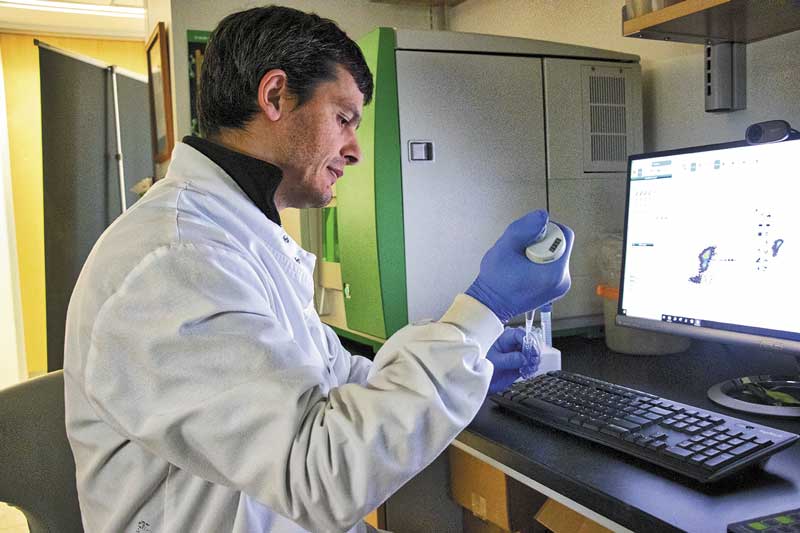 Marine viruses flourish in the ocean, but they are not always detrimental to the organisms they infect. Bigelow Laboratory Senior Research Scientist Joaquín Martínez Martínez, an expert in marine virus ecology, believes that interactions between marine viruses, algae, and bacteria may hold the key to the complex systems of harmful algal blooms. Image courtesy Bigelow Laboratory for Ocean Sciences

Could life exist without viruses?

At this point, we might all be daydreaming about a virus-free place somewhere on Earth. It’s the sort of question that seems perfect for contemplation when stuck in isolation, quarantined, and socially distanced from friends and family. If we could magically make all viruses disappear, would the rest of life carry on?

When it comes to answering questions about viruses, there is perhaps no better teacher than the ocean. The strangest secrets of the workings of life are found in the ancient depths of the sea, where alien-like creatures challenge our preconceptions of the natural world. Snails that build shells of iron to survive in the scorching waters of hydrothermal vents. Drifting arrow worms with spiny teeth growing on the outsides of their mouths. Transparent animals, and those that glow. Creatures that subsist by eating detritus. What better place to hunt for truths about viruses?

By now the average person knows more about viruses than they ever thought they would. So much has changed, all due to this one unfathomably small entity—and it really is small. So small it’s hard for our minds to grasp. If you could somehow capture all of the coronavirus particles circulating throughout the world at the peak of the pandemic and gather them into a pile, they might fit into a teaspoon.

Most people think of viruses as a source of disease and death. When the comedian Bill Hicks said, “humanity is just a virus with shoes,” he didn’t mean it as a compliment. While Hicks had some cutting insights on humanity, this characterization isn’t quite fair to viruses. The ocean quite literally is full of viruses, and these marine viruses teach us that most viruses are not only harmless to humans but essential to life on the planet, at least as we know it.

Let’s do the trick where we gather all of the virus particles together into a pile, only this time, we’ll fish for the ocean’s entire stock of viruses. If we could somehow do this, you’d notice right away that the pile no longer fits into a teaspoon. In fact, you’d feel pretty silly standing there with your teaspoon, as our pile of virus particles would weigh more than the most abundant fish stocks in the world. Current published estimates put the weight of marine viruses, globally, at an equivalent to that of around 75 million blue whales. Take a moment to picture a pile of viruses that massive. If we took our new pile and lined them up end to end, they’d stretch for hundreds of millions of light years into outer space. To look at it another way, a single drop of surface seawater contains, on average, around 10 million virus particles.

This is a good place to pause and point out again that these viruses are harmless to humans. When you emerge from your seaside swim and use your towel to dry the billion-some-odd viruses off your nose, there’s no need for concern.

But if they’re not there to infect us, what could this unfathomably large population of tiny particles be doing in the ocean?

To begin with, anything that is so abundant in nature inevitably becomes food for something else. If sea creatures can live on detritus, why not on viruses? An equivalent of 75 million blue whales is a hearty meal for the right kind of hunter.

Scientists recently have discovered strong evidence of sea critters eating viruses. By mapping the DNA inside of tiny organisms called protists, a team of scientists at the Single Cell Genomics Center at Bigelow Laboratory in Boothbay, Maine, has found signs of virus DNA apparently digested by protists. This turns the idea of viruses as killers on its head—here, as a globally abundant food source, viruses are actually sustaining ocean life.

From here the situation becomes even stranger. For some species, being infected by a virus can confer extra abilities. It’s a bit like when Peter Parker was bitten by a radioactive spider and became Spiderman. Viruses can deliver or activate new genes in the host, making them able to access new sources of energy in the ocean or boosting certain kinds of defenses. In this case the metaphorical spider bite might result in the ability to digest tree bark. It might not be as exciting as super strength, but it can come in pretty handy if you’re surviving in the wild. For many viruses, hiding out in a host and bestowing new powers are strategies for survival. The scientist James Lovelock once wrote, “An inefficient virus kills its host. A clever virus stays with it.” In this case, the truly clever virus makes its host even stronger.

If you haven’t fallen in love with marine viruses yet, then look no further than the recently discovered giant viruses, or “giruses.” They are the charismatic megafauna of the virus world, towering over the average virus. Ironically, giruses went undiscovered until recently, precisely because they are so large. One of the standard steps in looking for viruses is to filter away the big stuff in order to focus on the tiniest specks. Giruses, being so large, were always filtered away, until one day they were noticed under a microscope in a sample from a cooling tower. The first girus was named “mimivirus,” and others have been discovered since, often in some of the deepest and most remote parts of the ocean. Giruses are larger even than many bacteria, and if that doesn’t seem very big, consider this: giruses are large enough to be infected by smaller viruses. Indeed, there are satellite viruses, sometimes called “Sputnik” viruses, that go after these larger giruses. Viruses that can be infected by viruses: that should give even the most ardent virus hater a touch of sympathy.

These are just a few of the long list of viral characters in the sea; there are hundreds of thousands of different types. They play myriad roles in our environment, many of which benefit humans. Consider toxic algal blooms, for example. Many algal species produce toxins that can be filtered into seafood or drinking water, the most dangerous of which are lethal to humans. These blooms are a problem worldwide, and they represent one of the main concerns in our changing environment, as they increase with climate change and human development. Even in places where there is careful monitoring, new toxic species have been showing up unexpectedly, shutting down shellfish operations or poisoning drinking water. Yet everything—even toxic algae—is potentially susceptible to viral infection. 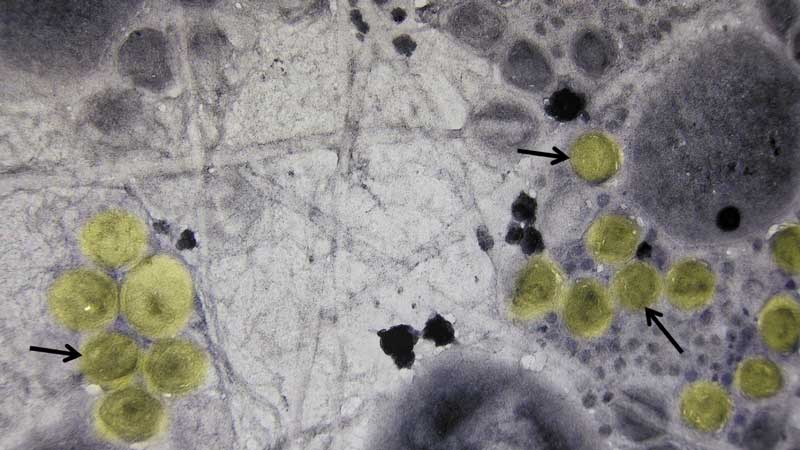 This image highlights viruses found inside a plankton cell. In general, viruses are too small to see well with normal light microscopes. Instead, images of viruses are usually made using electron microscopy, which uses beams of electrons (instead of light) to snap a picture. This means that there is no color, so any coloration has to be added in afterwards. Image courtesy of Dr. Joaquín Martínez Martínez. Image courtesy Bigelow Laboratory for Ocean Sciences

As part of a team studying a prolific toxic algal species in Florida called Karenia brevis, Bigelow Laboratory scientist Dr. Joaquín Martínez Martínez is investigating how ocean viruses might temper or even end Karenia blooms. With enough understanding, it may be possible to quell toxic algal blooms before they become dangerous to humans by deploying highly specialized viruses.

When it comes to the global climate system as a whole, viruses play an outsized role there too. The warming of our planet is underpinned by a rise in carbon dioxide. We see the most obvious effects in the atmosphere, but a great deal of emitted carbon dioxide is absorbed by the ocean, where it becomes entwined with the chemistry and biology of ocean ecosystems. Once in the ocean, carbon can potentially be transformed and sink to the sea floor—one of the only known pathways for removing excess carbon from the global climate system. But on its way down, a large proportion—possibly the majority—of that carbon must pass through viruses, which can speed up or slow down the process in a wide variety of ways. Remember, there are on average roughly 10 million virus particles per drop of seawater. Nothing passes through the ocean without encountering viruses.

This brings us back to our original question: could life exist without viruses? At minimum, life as we know it would be vastly different considering how viruses help shape everything from the global climate to the DNA of organisms around the world. Even large portions of the human genome itself are viral. Perhaps a better question would be, what can the ocean of viruses teach us about the natural world around us? Our culture often depicts nature as kill-or-be-killed, and viruses get an especially bad rap. But a closer look at the way ocean viruses work shows rich complexity, interconnection, and reciprocity.

The pandemic has been a humbling reminder of how frail humanity can be in the face of the forces of nature. With more global changes on the way, maybe a studious look into the ocean of viruses can teach us something about how we can adapt.