Rhodes 18 and the Castine Class 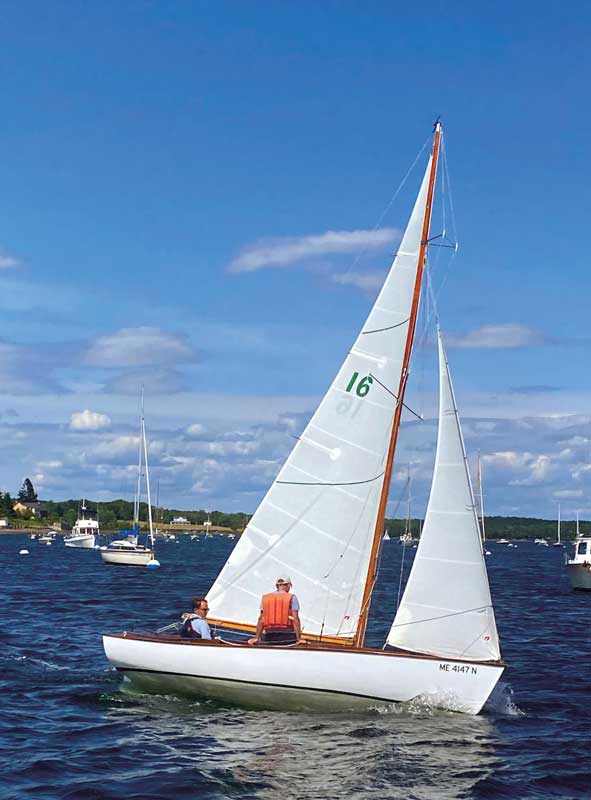 The Caroline B under sail in Castine. Photo by George Murnaghan Enjoyed the MBH&H cover story on the Rhodes 18 restoration in the Sept/Oct issue. Imitation is the highest form of flattery: the Castine Class, designed in 1951 by Mace Eaton and built by Eaton’s Boatyard, is a close cousin of the Rhodes 18. Indeed, legend has it that the Castine Class rig was copied from the Rhodes 18 (with jumpers and spreaders added to accommodate a spinnaker). We still have an active Castine Class fleet, with 11 boats racing this past summer. The photo seen here was taken by George Murnaghan of 2021’s Austin trophy winner: the Caroline B, skippered by Chip Terry. I have had the honor of “caretaking” the Caroline B for the last 50 years.

In a photograph accompanying Laurie Schreiber’s informative article regarding the U.S. Coast Guard in Maine (Nov/Dec 2021), it appears that there is a caption error (dare I say a “Captain error?”). The photo regarding Captain Brian LeFebvre’s retirement from Sector Northern New England indicates that he is shown on the left. Unless the men have swapped uniforms, it is clear that the Captain is to starboard with RA Thomas G. Allan, Jr. to port.

Carry on and keep up the good work. Semper Paratus!

I read with interest Polly Saltonstall’s article on the Mary E.’s accident and who brought her passengers ashore in the Nov/Dec issue of Maine Boats, Homes & Harbors—my favorite magazine.

While I want to tread lightly, as the museum and her crew are friends of ours, I would like to clear up the timeline and details of that rescue effort. Our Captain Chris Davis had just finished towing a disabled Sea Tow member and his vessel to the South Ramp in Bath when he saw the Bath Iron Works safety boat speed by out of the corner of his eye. Captain Davis thought it odd that the BIW boat would be so far off station and moving down river so quickly. Looking to where the safety boat was headed, he saw a large black and red object in the water and realized it was the schooner Mary E. Captain Davis quickly departed the South Ramp, and within seconds had joined the BIW safety boat alongside the stricken schooner. Shortly, the first two vessels on scene were joined by the Bath harbormaster. Captain Davis rescued nine souls from both the schooner and the water, all taken aboard our vessel, Sea Tow Guardian, and transported them to the South Ramp where EMS was waiting.

The rest of the schooner passengers and crew were taken ashore by the BIW vessel and the harbormaster vessel. Once the passengers and crew were safely ashore, Captain Davis returned to Mary E. and towed the still fully-rigged boat toward shore. With the great help and guidance of the Bath Harbor Master, Captain Davis secured Mary E. in a location along the shoreline known to have a cobble bottom with clear runoff from a nearby creek, greatly reducing the danger of silting-in that would most surely have happened if she had come to rest on a mud bottom given the strong currents of the Kennebec River. It was from that location that we spent the next few days raising and securing her for return to the museum. But that’s another story, for another time.

The top of my sailor’s reading list is Joshua Slocum, “Sailing Alone Around the World,” a classic and must-read for all sailors.

Thanks for continuing to produce a great magazine.

Peter Spectre’s list of good books omitted perhaps the greatest small boat sea story mystery of them all: The Riddle of the Sands by Erskine Childers first published in 1903 but re-published since and available today.

I just purchased two copies of your boatyard dog book—one for me and one for a long-time friend, Kay Gibson. We were both disappointed that a winner of the first Boat Dog competition in Camden was not mentioned; that was Bess, who was owned by Kay and Dana Gibson of Camden. Bess also competed in the Rockland trials and placed third. She made such an impression on many there that the local paper wrote an article about her. Maine Boats & Harbors even had her picture on a banner.

Bess probably had more time on the water than all the boat dogs in the book combined.

Bess was one of a kind she did what she did out of love for Kay and Dana. I was fortunate enough to have known her.

I was a subscriber for many years and purchased the books before renewing.

Bess’ story would be a great addition to your Boat Dog section. Thank you for your kind consideration.

A Letter from the Publisher - Issue 136