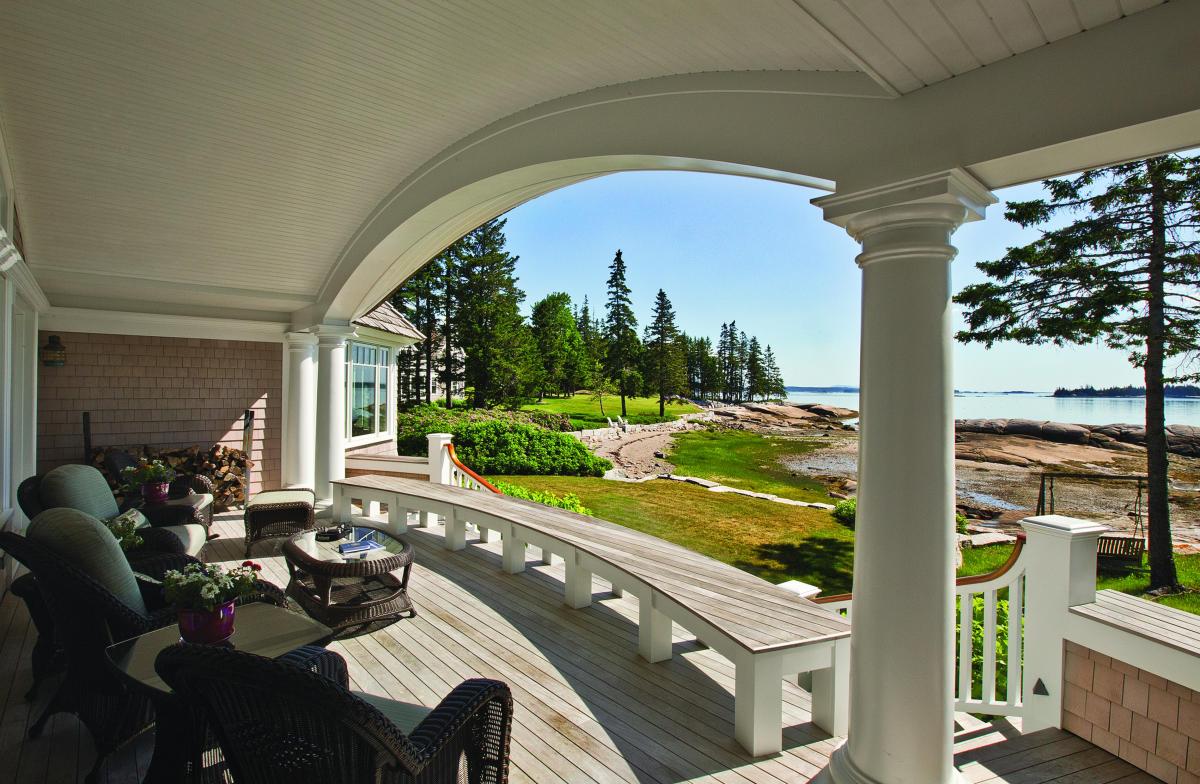 A covered porch overlooking the water is a favorite fresh-air living room that is furnished with comfortable seating furniture and an outdoor kitchen.

The drama and beauty of historic sailboat races inspires a lot of designers and homeowners. But a nautical décor can quickly slide into parody, as evidenced by a thousand seafood restaurants. To evoke the sophisticated design, precise joinery, and soaring ambition of a wooden racing yacht from the turn of the 20th century requires more than porthole windows and carved nameplates. It calls for a discerning eye, ambitious design concepts, and exquisite craftsmanship.

Architect Eric Chase of Brooksville, Maine, understood this when clients asked him to design a Shingle-style house on the downeast island of Deer Isle.

“We knew what we wanted when we looked at the pictures in Lost Bar Harbor,” said the homeowner. The 2015 book, by G.W. Helfrich and Gladys O’Neil, documents a selection of the grand vacation homes built in Bar Harbor between the 1880s and the end of World War I. Only a handful of those great manses survive, mostly in drastically altered form. The Great 1947 Fire dealt a final blow to a summer colony already undermined by the Depression and World War II. The book’s archival photography of long-lost houses sparked the design process.

“We wanted all those details, and all the peaks and valleys, but none of them fake,” the homeowner said. “We also wanted to pay homage to the 1890s America’s Cup races and to the 1895 crew of Defender. All, except for the skipper, came from Deer Isle.” The homeowner himself has deep roots in the community; his ancestors came to Deer Isle in 1801. 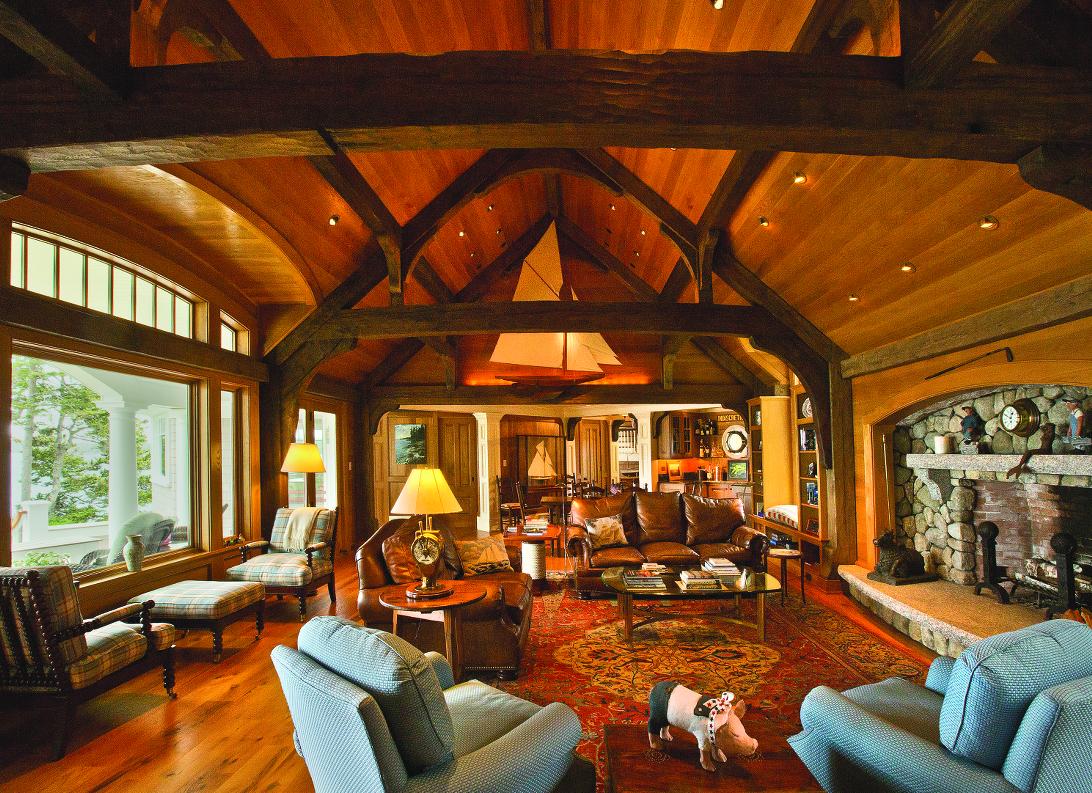 The living room is a soaring, timber-framed space lined with oak. The enormous fireplace was built of Deer Isle granite, which has a soft pink hue. Among the nautical elements the home-owners requested were bunkrooms that look like cabins on a boat, and a beamed living room.

“But it can’t look like a church or a lodge!” was the caveat.

Chase responded with a design for a V-shaped 5,800-square-foot house that follows the contours of the land. Windows, turrets, balconies, and terraces face the sea. The house does not so much settle into the site as perch upon it.

“One end of the house is on the ground; the other is four feet up, with a crawl space underneath,” said Jeremy Stewart, whose Deer Isle firm, Stewart Construction, built and finished the house. “This house is in a flood plain, so FEMA regulations required that it be up on piers.”

The beachfront location was made possible by using the footprint of a previous home.

Shoreland Zoning, which prohibits residential construction within 75 feet of the water’s edge, was not an issue, Stewart explained, because another house had stood here; the new house would occupy its footprint.

“The stone work on this house is magnificent,” Stewart said. “We found much of the granite on grout piles here on the island.” Scottish for “waste,” grout is rejected granite piled up at quarries. Some of the largest stone pieces were provided by Freshwater Stone in Orland. Ellsworth mason Harold MacQuinn did all of the stone work, which Stewart describes as art. 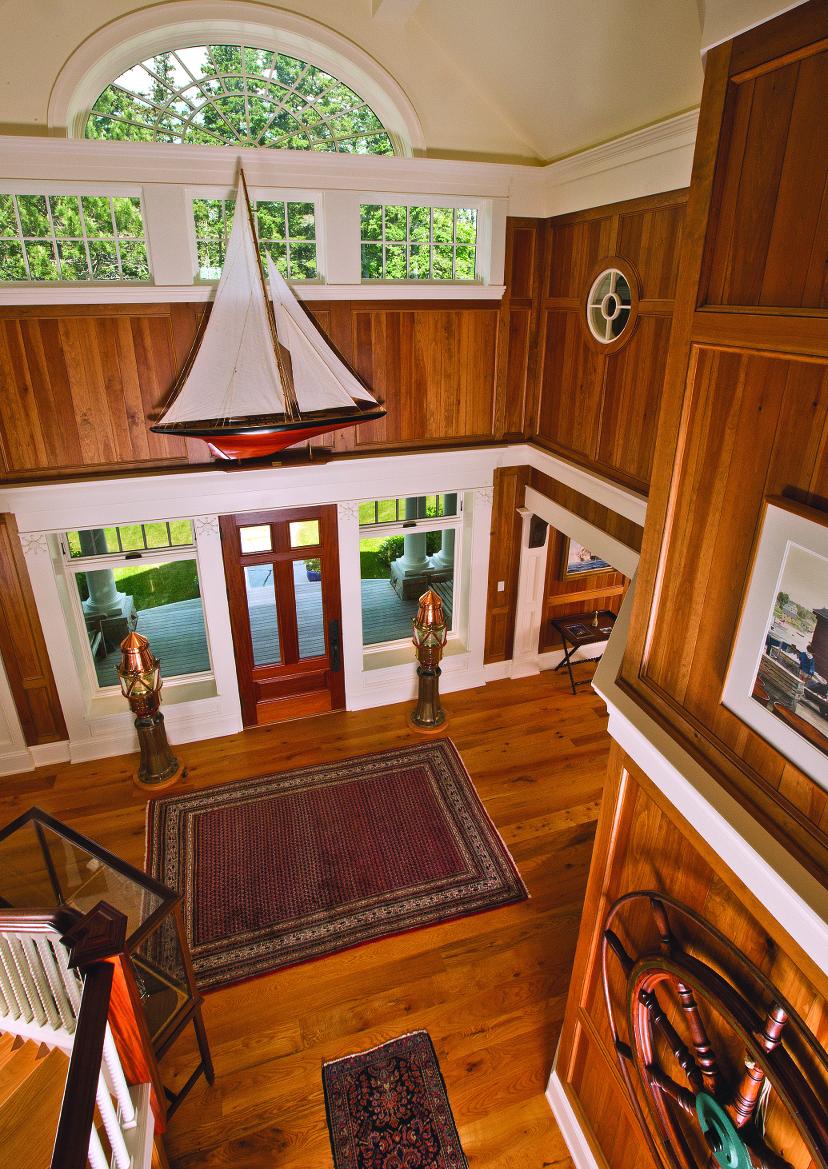 The front door leads into a two-story entry hall sheathed with oak. The door is crowned with a pond yacht model and flanked by binnacles. Eric Chase’s design for the living room evokes a yacht, not a lodge or a church, with a peaked ceiling supported by massive oak timbers, fine oak sheathing on the ceiling and walls, a gently curved eyebrow over the largest of the water-facing windows, a massive fireplace, and oak flooring deliberately chosen to be of lesser quality than the oak on the ceiling.

“It’s reminiscent of how, on a boat, careful joinery is a concern even on the ceiling,” Chase said.

Among the details that he incorporated into the interior design is a rope motif that encircles windows, forms parts of crown moldings, and decorates column capitals. Other nautical design elements include ceilings fashioned from precisely pieced pine boards, interior and exterior porthole windows, and several English pond yachts displayed in the peaks of the living room and home office. To support them, Stewart designed and fabricated custom metal brackets. To decorate and illuminate the rooms, the homeowners also found an impressive collection of antique brass binnacles, ship’s lanterns, and other nautical elements.

“I wish the house was bigger, because then we’d have more space for this kind of stuff,” said the lady of the house. “It’s so much fun to hunt for, and find, nautical items.”

She pointed out that, for the kitchen, she chose granite the color of the water outside the windows.

“Deer Isle granite is too pink for the kitchen counters.”

The homeowners collaborated with Connie Dedham of the Ellsworth-based Interiors by Details on cabinetry. 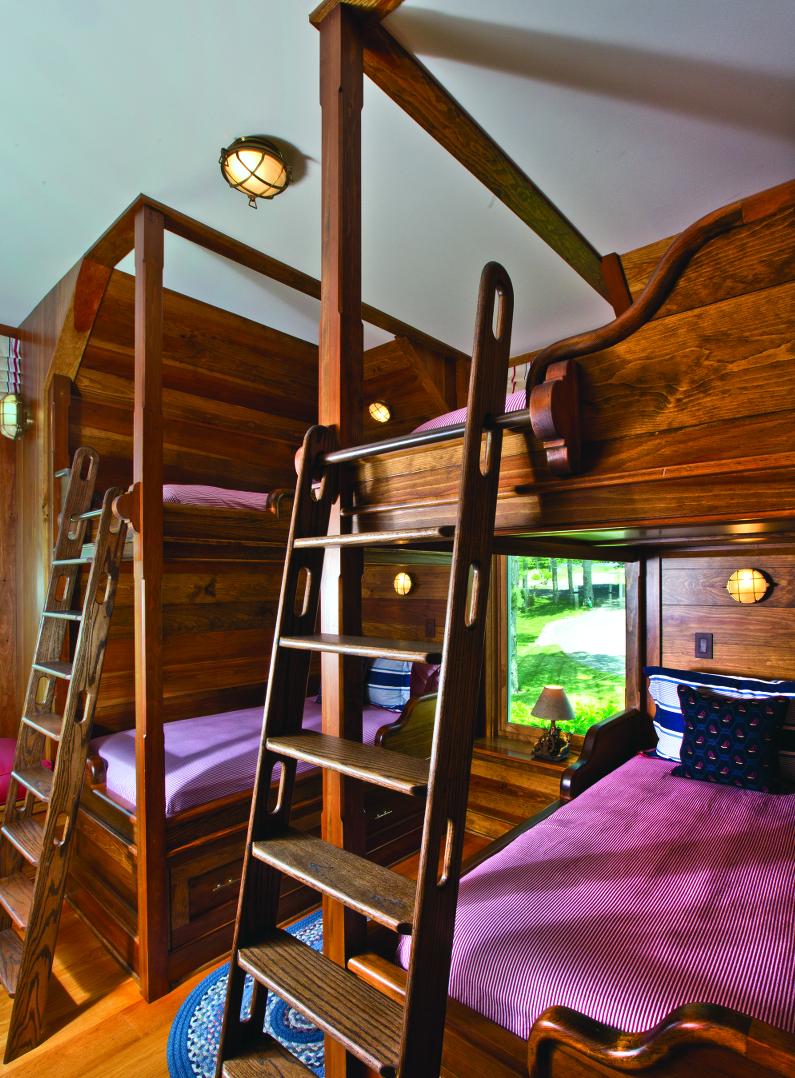 Among the homeowners’ wishes for this house were bunkrooms designed to resemble cabins aboard a boat. For help with furniture, window, and upholstery fabrics, they turned to Anne Reiter of Wallace Interiors. The Trenton interior design firm has served the area for 100 years and is unusual in that it includes a workroom as well as a showroom. Clients’ orders are stitched on site, instead of being shipped to workrooms; this makes for better quality control and it streamlines the process.

Reiter developed and installed a décor made up of classic, traditional shapes upholstered in blue- and earth-toned fabrics. Many, like those used for window panels in the master bedroom and in the home office, underscore a decorating scheme that refers to sailboats in subtle and overt ways.

“She loves fabrics and is a very positive person,” Reiter said, referring to the homeowner. “That made it a lot of fun. She especially loves plaids, so we used them a lot.” An example is the blue and oatmeal plaid used on a pair of spool chairs and a matching hassock placed before the living room’s picture window.

Chase, whose area projects include an addition to the Stonington Opera House, said that he does not have a signature architectural style. 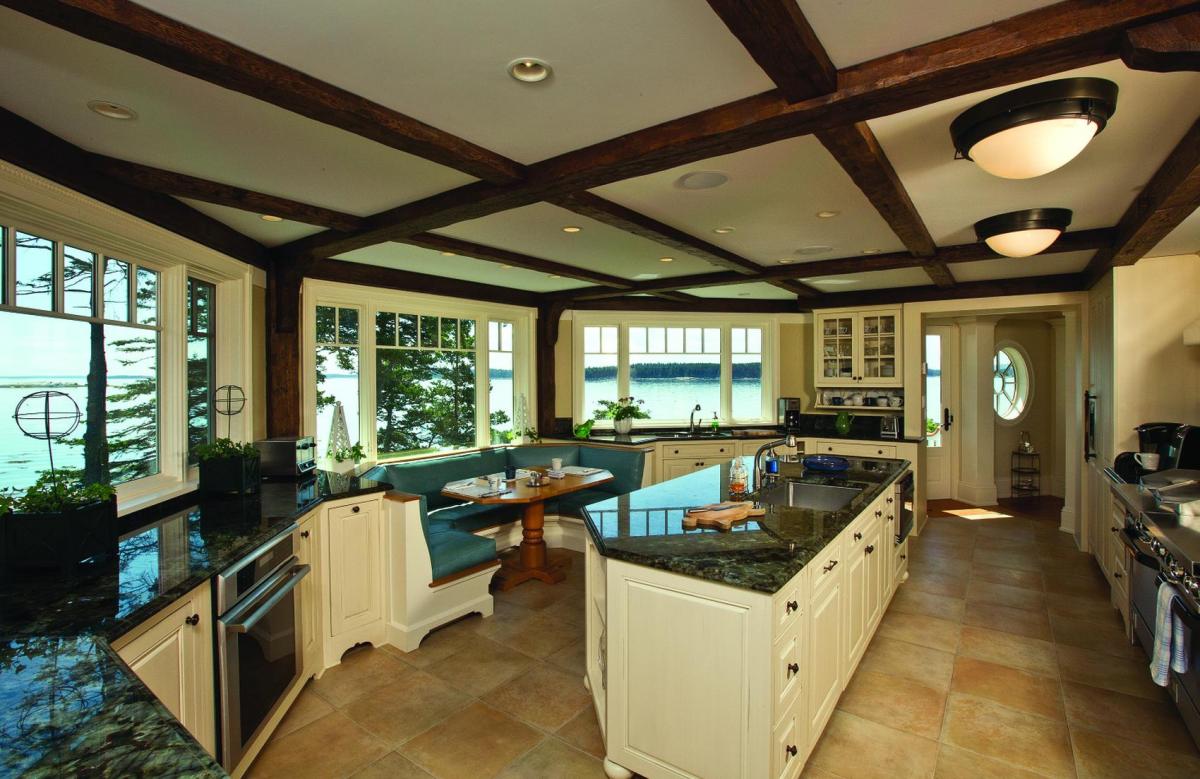 The expansive kitchen, a large, beamed room overlooking the water, includes a chef’s delight of appliances and a cozy banquette built into the gently curving windowed wall.

“The client’s needs and wants, the use of the house, and fitting it into the surroundings are what come first,” he said. Nonetheless, he takes special pride in this house. “It’s a pretty special place,” Chase said.

The homeowners could not be happier. The kitchen is a favorite room for her; the husband especially likes the living room and his upstairs study.

“When I walk into the living room, I’m happy,” he said. “It’s very cozy in there. In the upstairs room, I get away from everything. It’s very quiet. The only noises I hear are the lobsterboats starting up at 4 a.m.”