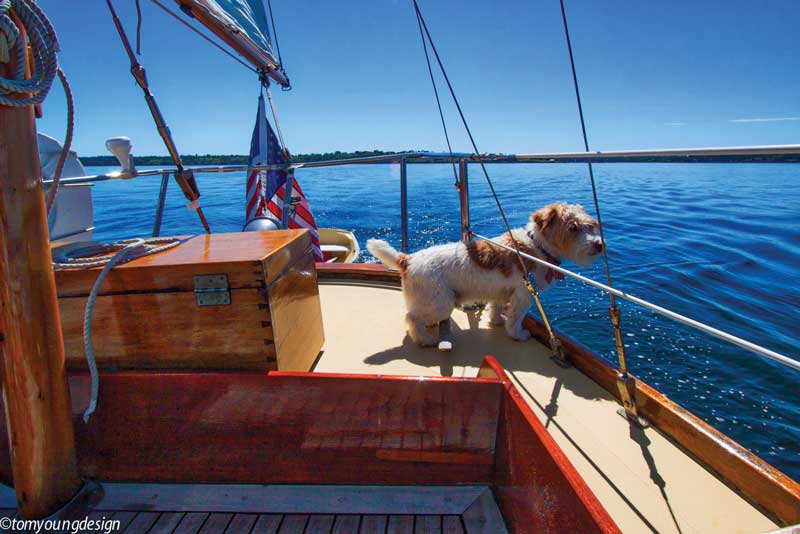 Tommy is a lifelong sailor. He began sailing on Christmas as a tiny pup and is now in his 14th season on the Maine coast. A Russell Terrier, he loves to be on the water, and—as an avid swimmer—to be in it, every chance he gets. He has the heart of a Labrador retriever, if with only a small propeller.

He considers it his duty when on deck to guard his family’s 1961 Alden Challenger from his perch on the toe-rail.

There are “things” out there in the water—he’s seen them. Big dark dogs with no ears. They come out of nowhere from below and scare the dickens out of him. Ever vigilant, he scans the surface of Penobscot Bay, relentlessly.

“He and I especially enjoy sunrises on the water,” said Tommy’s human, Tom Young. “While the others sleep below, he can’t wait to clamber up into my lap in the cockpit alongside my morning cup of coffee as the sun rises. From his perch, he’ll slowly scan the water. I’ll watch that handsome little head turn as he follows a swimming guillemot, seal, or a distant osprey. This is his world out on the water, as it is ours. There is no better crew than a sailing dog.”

Mystery Harbors No. 1 and 2