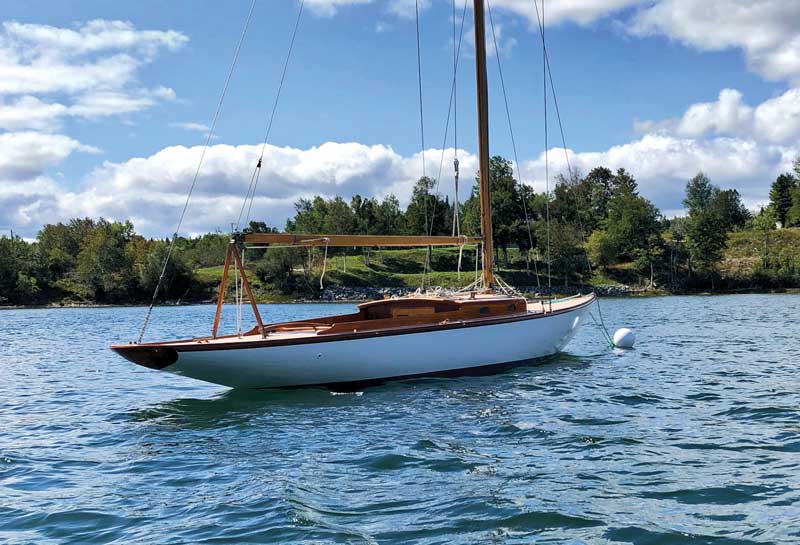 The Rachel at rest on her mooring in Chamcook Harbor.

Little prepares you for the experience of boarding your own boat on dry land. Normally, climbing onto a sailboat can be unsteady, but you compensate by feeling the tip and the sway of the boat and the water in your legs and bending your knees. On a drydocked boat, that doesn’t help.

I sat down in the cockpit opposite Bruce Campbell with a thud, and the boat didn’t give an inch. Next to him sat Dave Clarke, a woodworker who comes from generations of boatbuilders and one Navy Commander. Campbell has tended our Dark Harbor 20, The Rachel, for years. She is named for the whaling ship that appears in Moby Dick, searching for the captain’s lost son (my father did his thesis on Moby Dick), and for my sister Rachel.

Campbell looked crestfallen. Together he and Clarke had painstakingly taken our boat apart. The Rachel, born nearly 100 years ago, had begun to show her age. Up near the bow, they had found damage to the hull where we keep our anchor. New ribs had been built and added. Clarke showed me places where other ribs under the deck needed repair and explained how they would have to remove the top of the cabin to get at them. Campbell, an experienced sailor who tends to multiple boats in the southwestern corner of New Brunswick, Canada, looked physically pained to have to tell me how much work and expense lay ahead.

The beautiful peach-colored canvas on the decks had been removed, revealing planks of western red cedar side by side with a bronze tube sticking out where the tiller attaches. The transom had been rebuilt using three layers of mahogany, steam bent to duplicate the original curve before being glued together.

After we climbed back down, we stood under the stern and Clarke explained the next challenge. Under the stern there were signs that the bolts holding the bottom of the boat to the ribs were loosening. Arrayed on a sawhorse nearby were similar bolts that had been replaced in the bow. Clarke wanted to dig deeper to see whether the problem in the stern needed to be resolved now, but Campbell and I agreed that this at least was something we could wait on.

For him, The Rachel has always been something of a labor of love. As far as I know she is the only Dark Harbor 20 north of the Maine border, so besides the considerable local expertise, he has had to consult experts around Islesboro and at Artisan Boatworks in Rockport, Maine, among others. He tells me that he believes, as I do, that the effort and expense is worth it, but for both of us it is a leap of faith. 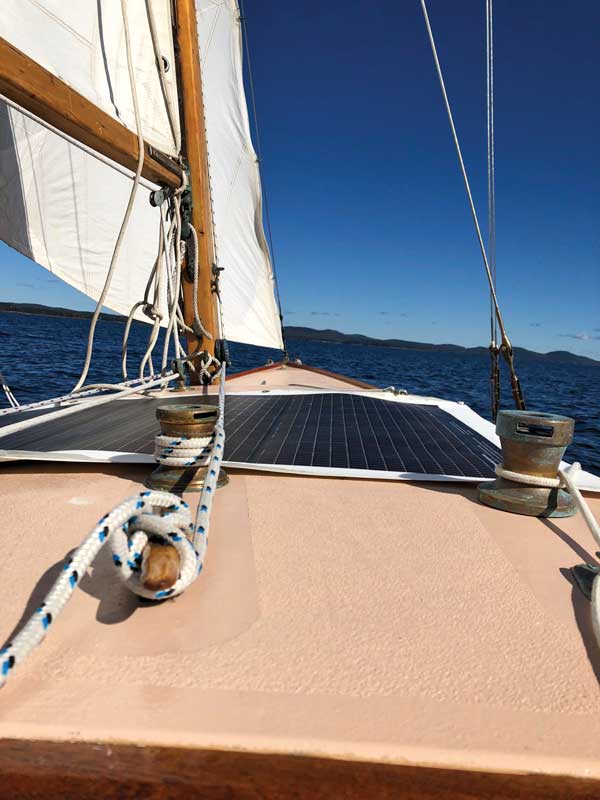 The Rachel returns to Passamaquoddy Bay, its refurbished peach-colored deck shining in the sun, solar-panel charger at the ready. If the author gets his way, next summer the charger will power an inboard motor that can be turned on when necessary at the flick of a switch. The first time I ran The Rachel aground on my own, I felt a clenching in my stomach. We had a big group on board—cousins, kids—and were sailing across a benignly treacherous bay just below our house in St. Andrews, New Brunswick. The clenching was because my father was not on board, and I knew that however this experience finished, it was going to be on me.

Running through the middle of that bay is a tidal road much like the famous one to Mont Saint Michel in France. The road is fully passable at low tide and entirely submerged at high tide: but even when it’s covered, it’s still visible as you pass over it. It’s a kind of ghost road with a treacherous rise near the far end. (The tides in St. Andrews rise or fall an average of 18 feet in a six- hour period.)

I had been trying to avoid that high point but had instead hit it straight on; the boat just stopped where it was despite being under full sail. The tide was not yet high, so we had a little wiggle room. However, if we didn’t get off soon, our sailboat would have to spend part of the next 12 hours on land.

Luckily a man happened by with a large launch. He took everyone ashore except for me and an older cousin. This raised the level of the boat. Then the two of us leaned over in one direction as far as we could go, and the boat bounced over the rise as if it were riding a pogo stick over a child’s set of stairs.

Later my cousin brought me some small rocks marked with the blue paint from our keel that he’d found on the tidal road. I put them on our mantelpiece alongside a picture someone had given my father of The Rachel on its side on that same road, in about the same spot, with the legend, “I’d rather be sailing” painted on the frame. It could have been worse.

I learned to sail from my father, who was an accomplished lawyer, a bright, energetic, expansive man, and a very good sailor though he could be as impulsive on the ocean as he was careful in his practice. We had a long history of finding our way out of difficulties because we knew we could rely on each other in a pinch.

That connection had not been immediate. I had to find out on my own that the way to avoid the discomfort of heeling was to take refuge on the bow.  For me that was enough. He was given to wholesale reassurances about sailing safety. He told me that the water in Passamaquoddy Bay was too cold for sharks—no longer true if it ever was, and later that the keel on our boat was too big for the boat to tip over. After a time, though, neither my brother nor my mother would sail with him.

By the time I was 13 or so, I loved sailing. We developed a routine in which he was a crazed captain and I was an obstreperous first mate. These characters were perfect foils for tense moments—a shackle caught on the mast as the jib came around in a high wind or a mooring line missed in a difficult sea. They also served as a salve on wounds from how the interaction had been handled. The captain could be wrong, but not my dad. The mate recalcitrant, but not me.

A few years later, my father took my cousin and me on a week-long sailing trip in our 19-foot Alacrity sloop called Gnu from St. Andrews to 700 Acre Island in Maine, where he had bought property. When we pulled up to a dock along the way, one of the resident experts christened us a “bailing dish.” As we beat our way down a passage that had actual whirlpools along one side, our stays came loose. When we emerged from the passage, we encountered a whale.

In Maine, my father traded up for The Rachel.

We were a good team, especially for landing. I handled the bow where I was strong enough to spear the mooring loop with the boathook and haul us toward it if we missed it. He was better at assessing the wind or the turning range of the lobsterboat that we also owned. 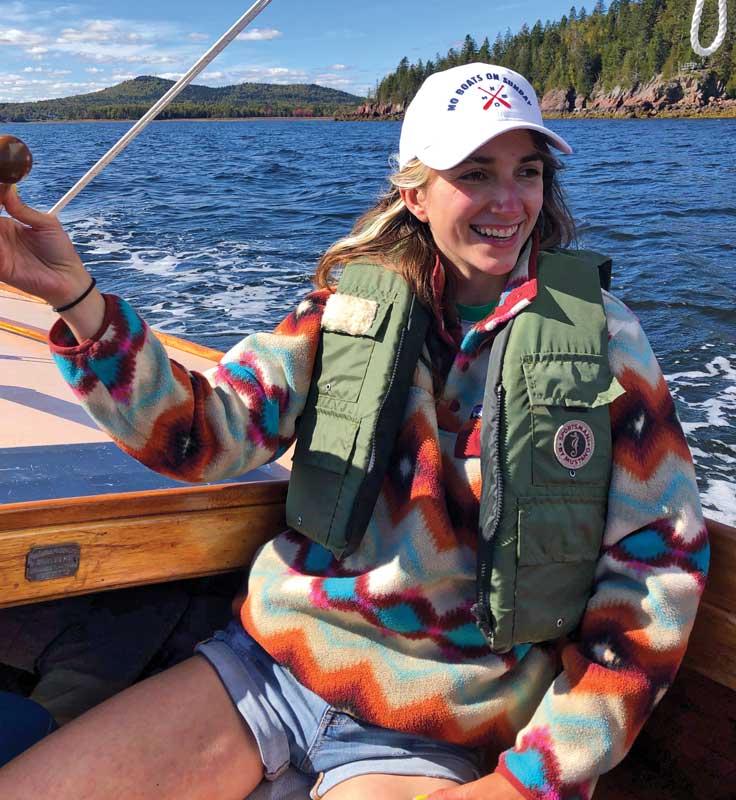 The author’s eldest daughter Nina takes the helm at the end of The Rachel’s first summer back in the water. Some 20 years after we’d arrived in Maine, my parents bought a house back up in St. Andrews. The Rachel had become a member of the family, so we took her with us. After my father retired, he and my mother went to St. Andrews for six months every year; my family went for one, but while I was there, my father wanted to sail every possible day, weather be damned. Those outings were wonderful productions. We would assemble a cooler of beer and sodas, salami sandwiches, fruit, and cookies. On board, he would talk about whatever was going on in his life, ask questions about ours. Offer thoughts. Tell stories. I treasure a video of him holding the tiller over one shoulder with his eyes on the sea ahead, and the sound of the water trickling by.

And we could get that boat to move. Under full sail with its gunnels in the water and its crew on the railing, she takes off. There’s nothing like standing braced at the tiller, feeling the pull and the balance of the boat.

Gradually, however, my father developed a reputation for being involved in boating mishaps. Often, they had to do with landings. There was a point at which he agreed never to go out in the sailboat alone, but his choice of crew members usually had more to do with availability than ability. Any casual guest who found herself faced with being pulled into the water while grabbing the mooring line could be forgiven for instead choosing her own safety.

From my point of view, it wasn’t his sailing skills that were lacking so much as his judgment. He wanted to go out whenever he wanted to go. Once we invited a friend for a sail, but when he arrived the skies looked threatening. We ate our lunch inside, and I hoped that would be it. The skies still looked threatening, but my dad was raring to go. As we left the mooring, rain began to pour down.

On one of our last sailing trips together, we went out with Bruce Campbell on a very windy day. We had never had a reefing system on the boat; so he jerry-rigged one that enabled the boat to take the crazy winds in stride. Campbell suggested making the change permanent. “It’s not impossible to swamp this boat,” he warned.

I felt the same nerves talking to Campbell about rebuilding the boat as I’d had when I’d run us aground. My father had always made these decisions; but he had died the summer before. He had resisted adopting Campbell’s reefing system. I will not be doing that. In addition to the reefing system, Campbell wants to make our jib self-tending. While we were discussing the work, he lamented that my father and I would never listen to the suggestions he made about how to sail the boat. That needs to change too. Sailing unsafely is just not fun. I want more fun, less risk.

But I know what I won’t change. Long lazy sails across Passamaquoddy Bay with a cooler full of beer, sodas, sandwiches, fruit, and cookies. I’d rather be sailing. It’s time to find out if the mate can become the captain. 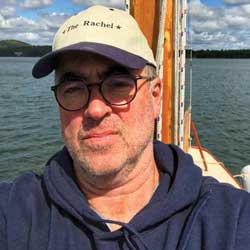 Jonathan Sapers is a writer based in New York City. He has published more than a dozen short stories and is at work on two novels.

Snail whispering, the prodigal schooner, and a message in a bottle