Against a murky backdrop of global turmoil, traditions bring a sense of security; the players may change, but the traditions remain, unifying, nurturing, and maintaining connections to past generations.

One-design racing in summer communities up and down the coast of Maine is such a tradition, including on Islesboro, where Dark Harbor 20s have been racing for 85 years. The races are a joy to view, as much as it is to be aboard. For many, the 20s are as much of a cherished island icon as the Grindle Point Lighthouse. “To me, the 20 represents more than just a boat,” said Stanley Pendleton, founder of Pendleton Yacht Yard on Islesboro. “It is part of the life I have grown up with—it speaks of the life we have in Islesboro, and the history of the life we have been nurturing for the last century.”

The DH 20s came into existence after 1934, when naval architect and classic boat sailor/designer Clinton Crane led the Tarratine Yacht Club of Islesboro in the search for a new class of racing sailboat to replace the gaff-rigged Dark Harbor 17s. He introduced the club to Olin Stephens II of Sparkman and Stephens. The young MIT-educated designer was beginning to attract attention for designing the record-breaking yawl Dorade; he had also designed Gimcrack, one of the first boats whose design was tank tested at the Stevens Institute of Technology in New Jersey. The findings would go on to be called the “Gimcrack Coefficients”—a pivotal breakthrough in the science of predicting sailing yacht performance. 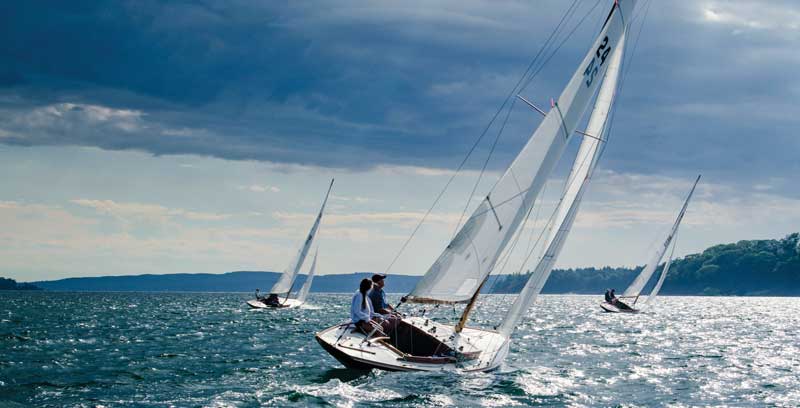 A sudden summer squall looms over West Penobscot Bay as the Dark Harbor 20s race toward the finish line.

Stephens, who would become one of the most successful and influential yacht designers of the 20th century, was at the frontier of scientific yacht design focused on speed. The Dark Harbor 20 was a beneficiary. He used the Gimcrack findings to help design the new class, and the result was an immediate success. Reported Stephens, “They are nimble, exciting to race, and typically carry a crew of three in addition to the skipper. Displacement is light, and beam is moderate towards narrow; the hull easily driven. The boats are also attractive in appearance, as would be expected of a class sailed in this stylish and long-established enclave.” In the words of an island veteran at the time, the Dark Harbor 20 “turns on a dime and gives you change!” 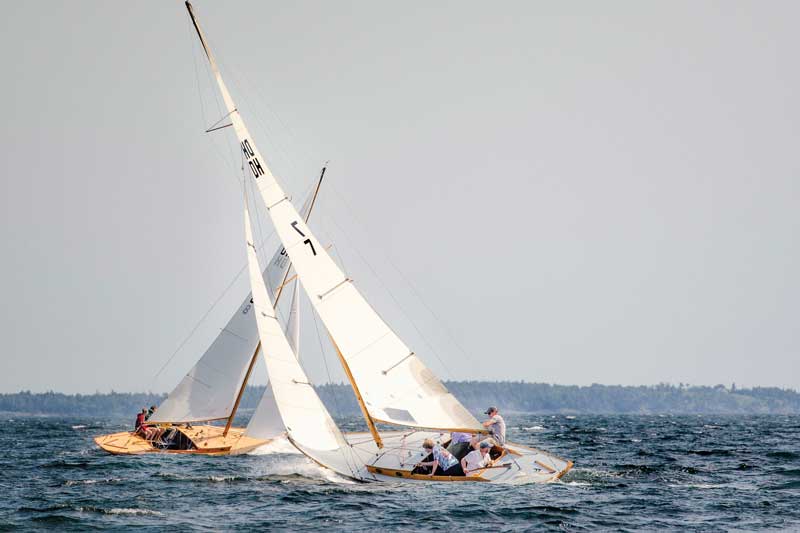 Port tack crossings never fail to quicken the pulse. Boats 7 & 8 are on the windward leg beating up East Penobscot Bay.

Today, more than 80 years later, the DH 20s remain fast, responsive, and easy to handle. The current Islesboro racing fleet numbers 24 boats. Distinctively sleek, they have a narrow fin keel hull with long overhangs and a tall Marconi rig. Add custom craftsmanship, bronze fittings, and varnished mahogany brightwork, and you have all the characteristics of a timeless beauty.

During the 1930s, the first 16 DH 20s were built by George Lawley & Son in Massachusetts; five more were built after World War II by S. B. Norton & Son on 700 Acre Island at what is now Dark Harbor Boat Yard. All but one of these original boats remain today. “That so many of the inaugural fleet are still sailing is a remarkable accomplishment,” said Steve White, former president of Mystic Seaport Museum.

In 2003, over concerns about rising maintenance-and-repair costs, a “Save the Dark Harbor 20” campaign was initiated to preserve the fleet by researching a fiberglass version of the original boats, which were showing signs of age. Sparkman & Stephens re-engineered the design and Shaw Yachts of Thomaston, Maine, built four new boats using modern fiberglass materials and production techniques. The objective from the start was that the boats be identical in all relevant aspects to the original wooden boats to preserve their classic feel and ensure fair competition. 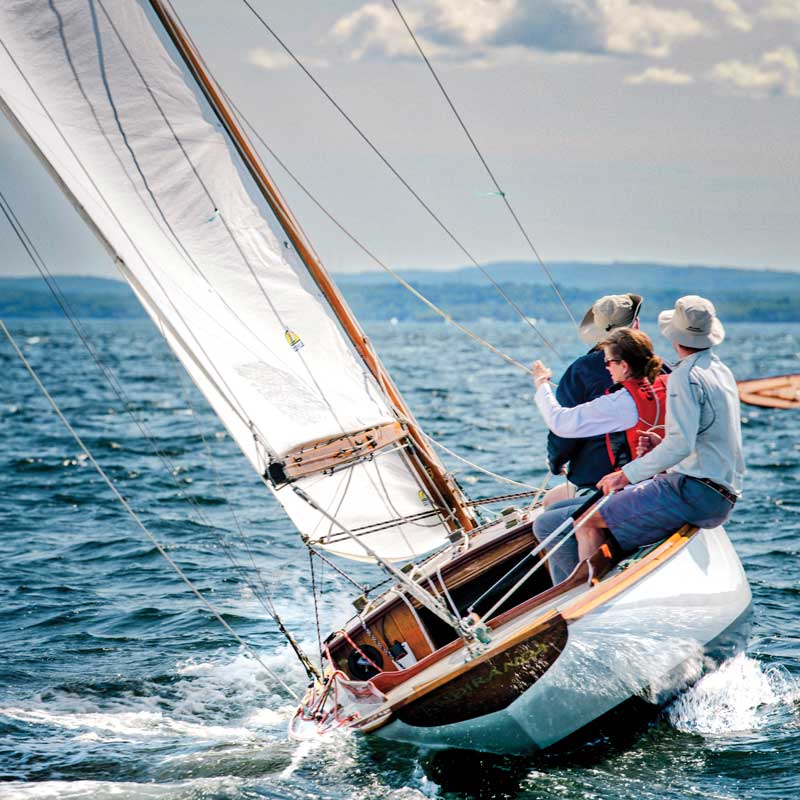 The custom craftsmanship, bronze fittings, and varnished mahogany brightwork of the 20s add to their timeless beauty. Extensive testing was performed between the old and the new in the pursuit of equality. Eleven different boats were weighed, soaking wet, and a naval architect from Sparkman & Stephens documented hull, keel, and deck geometry, tested construction materials, conducted inclining experiments, and took scale measurements of all the existing 20s. The new boats were strikingly similar to the old. For its final test, DH 20 skippers were asked to sail both wood and glass boats, and to the relief of the design team, there was no difference in the performance.

Mystic Seaport Museum honored Dark Harbor 20 sailors in 2018 for their commitment to preserving and maintaining a significant class of American sailing craft, and presented them with the William Avery Baker Award, “given to promote the awareness and appreciation of fine examples of one-design classes or boats, foster faithful preservation and restoration, encourage more people to do it, and keep boats alive and in use.” 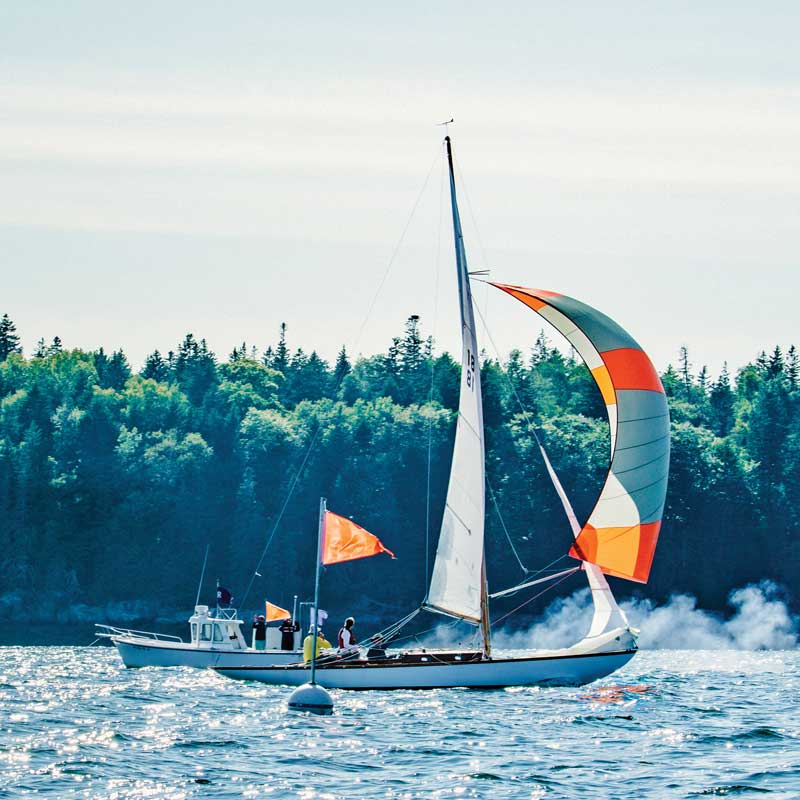 A loyal following of spectators keeps up with the action right to the gun heralding the victor at the finish line.

In 2019, Pendleton Yacht Yard built a fiberglass DH 20 using parts from an original wooden hull, including the lead keel, deck house/coaming, tiller/rudder post, varnished mahogany bulkhead, seats, spars, and fittings, as well as the original Lawley bronze castings from 1935.  The result was a new fiberglass boat with the patina of age, and a hint of the past; Shearwater ( previously named New Wave) was welcomed by the fleet two summers ago.

“The 20s have traditionally been handed down from one generation to the next,” explained Pendleton, “but we have secured hull No.6 for restoration or refit with a fiberglass hull, and are committed to preserving the authenticity of this special racing class.”

Today, PYY maintains and services the largest fleet of DH20s and is building additional new fiberglass versions of the boat, reviving Shaw’s original mold with what Pendleton calls a “modern twist.” The carvel-planked hulls, canvas-covered decks, and drifted oak rudder blades are being made of hand-laid fiberglass. The intention of each modification is to make the boats race and look the same as the originals. 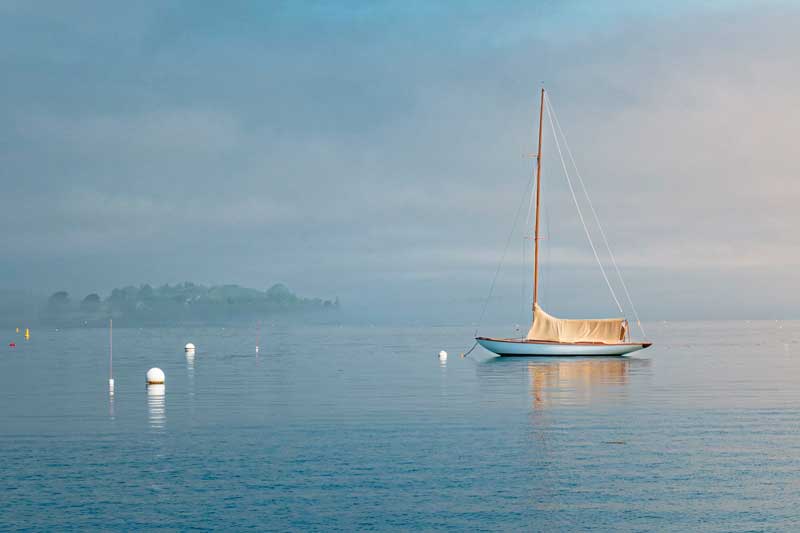 Even on its mooring, the Dark Harbor 20 is a photographer’s dream, a most graceful and tranquil seascape subject.

Even on its mooring, the Dark Harbor 20 is a photographer’s dream, a most graceful and tranquil seascape subject. But on any Friday or Saturday summer afternoon, the 20 is primed for racing, and the air is charged with anticipation. Keenly competitive skippers and crews maneuver at the race start, and a loyal following of spectator boats keeps  up with the action right to the cannon blast heralding the victor at the finish line.

The Tarratine Yacht Club offered its first silver sailing cup in 1899 for a series of Saturday races in a class for “raceabouts.” Rooted in this 127-year-old heritage, the DH 20 stands as a symbol of stability.

“Tradition” comes from the Latin verb “trader,” meaning “to give for safekeeping.” Surely the Dark Harbor 20 is a tradition that has tied together generations who have kept the class safe and sound for future enjoyment.

Tricia Ladd is a photographer who grew up near the Herreshoff boatyard in Bristol, Rhode Island, and summers on Islesboro, Maine. More of her photographs can be viewed at www.tricialaddphoto.com.