Here we are coming into November, past the Harvest and Hunter Moons and coming up on the Beaver Moon, and still no killing frost, though we probably should not mention it for fear of bringing it on. Though the oaks and beeches are still holding on to their leaves, most of the other hardwoods are losing theirs or have lost them. The hackmatacks are glowing gold in the fading sun, the blueberry barrens are turning to copper and magenta, and the grasses of the field are turning brown and lying down for a long rest.

Going from summer to winter is like going from leaf to wood. The supple and green curls up and dies giving way to the rigid and gray. The soft leaf falls leaving the hard wood stark against the sky. The garden is turned over to bury the dead leaves. Stove wood is stacked, wood chips and sawdust are tracked into the house, a wooden match is struck, and wood smoke fills the air. And so it will be until the leaves make their appearance again. Maybe there are really just two seasons around here—Leaf and Wood.

With that said, and somewhat surprisingly, it might be a good week to see one of the latest bloomers of the season here in New England, a shrub which doesn’t flower until its leaves are gone: Witch hazel (Hamemelis spp). I have seen this shrub in bloom only a few times in many years of tramping. The flowers are yellow and look a little like dried up forsythia blossoms. They really stand out in November woods.

They are pollinated, not by bees which are inactive at these times, but by a species of winter moth not to be confused with the invasive winter moths causing defoliation in the Northeast. Our pollinator is the witch hazel dagger moth (Actronicta hammemelis), which can raise its body temperature as much as 50 degrees by shivering. The caterpillar feeds exclusively on witch hazel leaves.

The bark and leaves of witch hazel contain compounds effective for treating skin irritations; early European immigrants were taught to use it by the First Americans. The twigs are also useful and are the preferred wood for dowsing or “water-witching.”

As the angle of the sun slips lower and lower each day and the shadows it throws get longer, various cryptic inscriptions become visible carved into the stone at the summit of Blue Hill Mountain. Over here are the initials CSA and there maybe JF. Here is the date 1856. Over there on the north face of a glacial erratic boulder are the initials SM. These stand for Solace Morse, whose homestead stood at the foot of the meadow by the Mountain Road, so his granddaughter told me many years ago. To carve these graffiti someone had to bring a stone chisel and a hand sledge hammer to the top of the mountain, taking some time and care to leave these messages from the past. Today, it goes without saying, defacing the summit is no longer permitted. 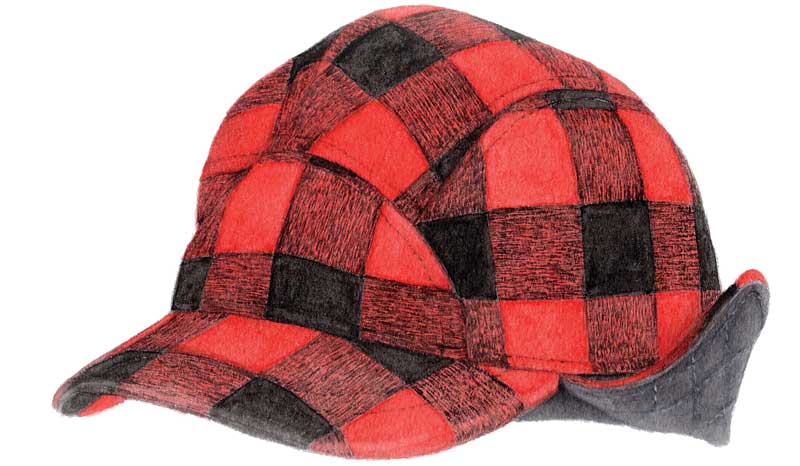 Out and about at this time of year, marked by fleece jackets and blaze orange gear, I miss the old red and black buffalo-plaid wool hats, shirts, and jackets that used to appear during hunting season. They still do appear on some of the old timers, though, like their wearers, they are a little tattered and threadbare. Paleontologists tell us that the migration of our ancestors into cold northernclimates had to wait until the invention of the needle and the awl some 40,000 years ago so that warm clothes could be stitched together out of hides.

And really, what a magnificent 40,000 years it has been here in the north, with warm clothes, fragrant wood fires, and in the heavens the twinkling Milky Way, the north-nosing Great Bear, Orion rising, and the shivering, shimmering Northern Lights.

As the sun moves farther south every day, I think of the story they tell at Sipayik that the sun is like a rooster that crows very early in the morning down by the Lubec Narrows on the longest day of the year, and then walks the length of Campobello Island crowing a little later and a little farther north every day until it crows at Head Harbor passage on the shortest day of the year. Then it turns around and heads back again as the days lengthen. Here we watch the sun set over Christy Hill in June and then bounce ever so slowly and deliberately southward in the evenings until now it is setting over Isle au Haut. At mid-day the sun barely makes it over the tall trees on the far side of the back field and the shadows get longer and longer.

The frost is working its way into ground still wet from our latter rains, here and there pushing up spikes of ice-like crystal tusks that shatter underfoot. Earthworms and overwintering insect larvae and grubs will burrow deeper in an effort to escape the cold, but will they escape the voles? A flock of starlings appears now and then to graze under the red pines. These things are all true.

Winter is the time for old stories to be shared. Here is one of mine.

One of the sweetest people you’d ever have the pleasure of meeting was Bill Torrey. Also one of the quietest. His part of most conversations consisted of a shrug or a nod or a tiny shake of the head. He had been a fisherman and a caretaker among other occupations, if I remember right. He carved tiny birds—loons, long-tailed ducks, chickadees, cardinals, blue jays—painted them realistically, and made pins and earrings out of them for the ladies. One day Bill took me for a walk in the woods to a place where springs of different colors pooled and flowed out of the ground. Fallen buildings and shards of broken bottles lay all around gradually being returned to the soil. This was once the site of the Blue Hill mineral spring company which bottled and sold these waters from 1888 to 1915. At one time the water was available in Pullman cars all along the Eastern seaboard and was advertised as a tonic for the kidneys and liver, perhaps as an antidote to other beverages served on those Pullman cars. I found a bottle from this spring for sale online for $350. Empty, unfortunately. Older summer people told me about the pavilion the company built nearby where bands from Boston would play for dances late into the summer night. It is altogether a magical story. But I, for one, am sworn to secrecy as to the exact location of the colorful springs of water.

With the leaves mostly fallen, we return to a familiar country and landscape which we haven’t seen for many months. This is the country of winter. We can see the bay and the mountain more easily and from more places. Stone walls snaking through the woods appear again, reminding us of the newcomer to New England who wondered why they built all those “rock fences” through the woods. Solitary rocks and glacial erratics are revealed again, like that giant off the Snow’s Cove road, among the largest in the state. Long ledges reappear in fields like the spine of an old horse where the hair has worn off. We’re looking at the primal “bone structure of the earth,” at the same time both familiar and disquieting.

Maine is celebrated for its rockbound coast, but it’s not just the coast that’s rockbound. Farmers joke about having a good crop of rocks this year, and curse when the potato harvester or sickle bar mower is damaged by rocks. In the spring picking rocks and loading them on a stone boat was a job for the whole family because frost seems to bring up a fresh crop every year. Someone calculated that there are more than 250,000 miles of stone walls in New England, and every single stone in these miles of stone walls was picked up and set in place by hand. It’s no wonder Maine farmers left in droves after the Civil War to go west where the topsoil was six feet deep with no stones bigger than a walnut. A Brooklin friend of mine took out a classified advertisement in our local paper offering “boulders for sale by the pound—you pick up.” Last I heard he hadn’t sold many.

The Maine coast is rocky and rugged for sure, but there may be some places where the rocks get softer the longer you linger. One of those places is the reversing falls at the confluence of Cobscook, Dennys, and Whiting bays in Washington County. Rocks worn smooth by tidal action make a perfect resting place to watch the most majestic tidal phenomenon in Maine for an hour or two just as comfortably as in your favorite chair. 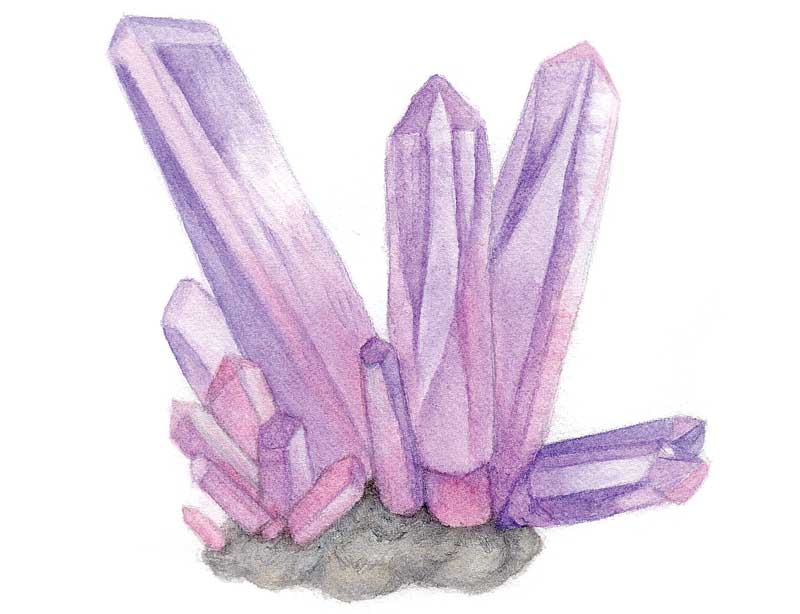 Sacred stones are nearly universal among humans, from crystals and meditation stones to the Black Rock of Mecca to Uluru Rock in Australia to Stonehenge in Britain. Muslims make pilgrimages to the Kaaba, Christians sing to the Rock of Ages, and Jews liken God to a rock in the Hebrew Bible. All these sacred stones are literal or figurative fragments of the Earth. The Earth is the most sacred stone of all, and even more to be revered if we are to survive here.

Seedpod to carry around

From Annie Dillard: “Crystals grew inside rocks like arithmetic flowers. They lengthened and spread, added plane to plane in an awed and perfect obedience to an absolute geometry that even stones—maybe only stones—understood.”

Rob McCall lives in Brooklin, Maine. This almanack is excerpted from his radio show on WERU FM, which can be streamed on weru.org.