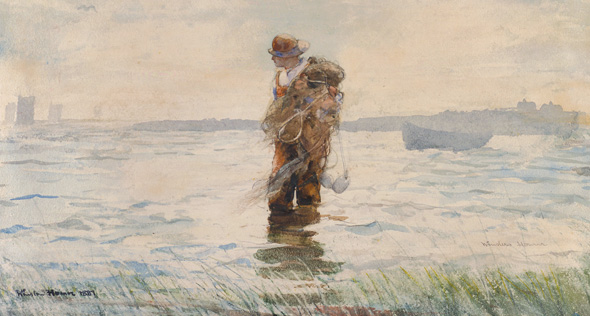 Captains Courageous by Rudyard Kipling with an afterword by C.A. Bodelsen Signet Classic, 1981 HOW DO YOU like Kipling?” “I don’t know. I’ve never tried it.”That exchange between a handsome suitor and a demure young lady, the caption for what was once, according to the Guinness Book of World Records, the number-one-selling novelty postcard, highlights the popularity of the British author Rudyard Kipling (1865-1936) in his heyday. His readership was huge; the Just So Stories, a score of popular novels, and collections of poetry captured the fancy of readers of all ages around the world. Kipling’s writings continue to entertain today, despite the battering the author has taken among the literati as a symbol of British imperialism (his writing often commends England’s rule of India). Among positive testimonials, in an essay for the Christian Science Monitor some years ago,August Heckscher, late ofMount Desert Island, claimed that the library of a country house “should contain, first of all, a set of Stevenson and of Kipling.” In the 1890s Kipling settled for a time in Vermont, where he wrote Captains Courageous (1897). In this memorable novel, a fishing schooner out of Gloucester, on its way to the Grand Bank, inadvertently rescues a boy, Harvey Cheyne, who has been swept from the deck of an ocean liner. This son of a railroad tycoon is forced to swallow his rich kid ways and toe—and heave—the line aboard the We’re Here, captained by the no-nonsense Disko Troop (surely one of the great fictional names of all time—just waiting to be appropriated by a grunge band). Troop’s son Dan takes Harvey under his wing, teaching him the ways of shipboard life. The contrast in their lifestyles is heightened in dialogue: when Harvey talks about driving in a car, Dan replies, “Haow? Lobster-car?”When Dan mentions a “kelleg,” a stone used in place of an anchor, Harvey imagines it is some kind of marine torture. Kipling makes use of dialect and nautical terms throughout, his ear tuned to the colorful turns of phrase that enliven the crew’s banter. At one point he inventories the captain’s navigational resources: “The said ‘hog-yoke’ [quadrant], an Eldridge chart, the farming almanac, Blunt’s Coast Pilot, and Bowditch’s Navigator were all the weapons Disko needed to guide him, except the deep-sea lead that was his spare eye.” As scholar C.A. Bodelsen notes, Kipling’s account of the schooner is detailed to the point that one might believe he had spent months at sea. In fact, the author researched his book by frequenting the wharves of Boston Harbor. The closest experience he had to a trip to the Grand Bank was to go out with a vessel fishing for pollock, which, as he related in his memoir Something of Myself, “is ten times fouler than any codschooner, and I was immortally sick, even though they tried to revive me with fragments of unfresh pollock.” Maine warrants a few mentions in the narrative. Among a sailor’s tales of the supernatural is one that involves a Maine harbor haunted by a dead crew who row alongside at midnight with the anchor in the bow of their old-fashioned boat, whistling—not calling, but whistling—for the soul of the man who broke their rest. When Harvey asks Dan if Maine is “progressive,” the reply is full of scorn:“Maine? Pshaw! They don’t know enough, or they hain’t got money enough, to paint their haouses in Maine”—a bit of Pine Tree State bashing way back when. Speaking of Maine, Kipling’s Just So Stories recently made the papers in the western part of the state. Children in a summer art program at Franklin Memorial Hospital in Farmington created paintings, collages, and masks based on “Rikki Tikki Tavi” and other Kipling tales and poetry. Rob Elowitch of Barridoff Galleries auctioned off the works to benefit the Healthy Community Coalition’s Mobile Health Unit. Captains Courageous is not Literature with a capital L; that Hollywood transformed it into a film classic in 1937, with Spencer Tracy winning an Academy Award for his role as a curly haired Portuguese sailor, confirms the appraisal. That said, it surely belongs in that aforementioned country house library or on the bedside table or in the clutch of vacation reading—an entertaining high-seas adventure that predates A Perfect Storm by a good century.
—Carl Little