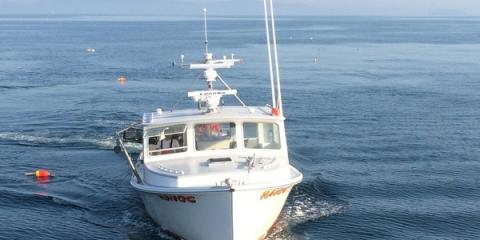 The value of Maine's commercially harvested marine resources set a new record in 2015, topping $600 million in overall value, according to preliminary data from the Maine Department of Marine Resources. The $631.7 million total reflects an increase of more than $33 million over the previous record set in 2014.

The news came as fishermen from across New England gathered at the annual Maine Fishermen's Forum in Rockland to discuss the state of their industry and pressing issues, including climate change and warming ocean waters.

Meanwhile during an afternoon panel on climate change at the forum, scientists said a continued trend in warming water in the Gulf of Maine likely would mean an especially early start to the lobster season this year.

Andrew Pershing, a scientist at the Gulf of Maine Research Institute, said temperatures in the Gulf of Maine have been increasing about .07 degrees Fahrenheit a year. While that may not seem like much, it is four times higher than the global average, he added.

""we are one of the fastest warming parts of the word today," he said.

The warmer water has changed a number of fisheries, contributing to the decline in cold-water loving cod and winter flounder, for example, and causing increase in formerly more southern species like black sea bass.

NOAA oceanographer Jon Hare said a study of 82 species of fish caught in New England found that 42 percent were at a high level of vulnerability due to warming trends while a whopping 79 percent were likely to be "negatively impacted."

Last year, 2015 marked the fourth year in a row and the fourth year ever in which Maine lobster harvesters landed over 120 million pounds, with landings totaling 121 million pounds. "Maine's lobster fishery continues to be a major engine for our coastal economy," said Maine Department of Marine Resources Commissioner Patrick Keliher. "While this year's value and landings are great news for our coastal economy, we also recognize that lobster represents more than 81 percent of the overall value of our commercial fisheries. It shows that we all must be working hard to build and sustain our commercial fisheries and to create more diverse opportunity, be it with traditional commercial fisheries or an expanding the role of aquaculture. This work is critical to ensure we can adapt to changes in landings and value in future years."

Maine's softshell clam industry retained its second place standing in overall value at $22.5 million, a record for the fishery. The jump in value came on the strength of a 47 cent per pound increase over 2014. At $2.46 per pound, 2015 landings netted harvesters a 23 percent increase in per pound value over 2014 despite a drop in landings of one million pounds.

At $2,171 per pound, Maine's elver fishery was by far the most lucrative of Maine's commercial fisheries on a per pound basis. Despite a season in which landings were well below the state quota due to a cold, dry spring that slowed elver migration and challenged harvesting, overall value increased by nearly $3 million. At $11.4 million, the elver fishery was Maine's fourth most lucrative behind herring at $13 million.

DMR officials consider 2015 a continuation of the successful rebuilding effort for Maine's scallop fishery despite a decline in value and meat pounds landed. "We expected 2015 to be lean in terms of landings," said Commissioner Keliher. "But considering that Maine scallop harvesters landed more than ten times the amount harvested in 2005, this fishery is on the right track."