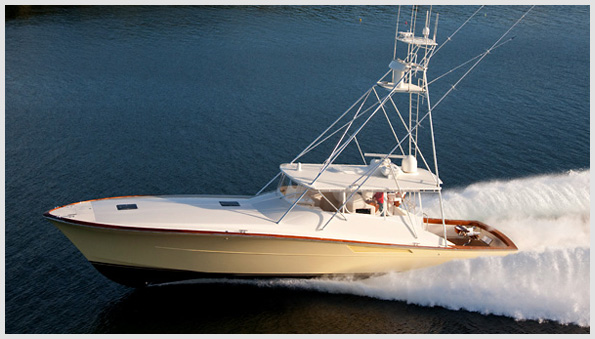 Ring Leader, a custom express sportfisherman built by Lyman-Morse Boatbuilders and launched in November, 2009. Photograph by Billy Black.
Launch Details:
Particulars: Ring Leader, a new 65-foot-long sportfisherman recently launched into the St. George River at the Lyman-Morse yard in Thomaston, might be considered by some to be a bit too long to truly fit into the express category, but word is that the boat is, indeed, “wicked fast” as we say in these parts. With speed such an obvious focus, it comes as little surprise that Ring Leader’s engine room is a major focal point of the vessel. To give a sense of the level of power-plant detail, we’ll just mention that the exposed fuel lines are polished stainless steel, and some engine parts were rendered in gleaming chrome. Naval Architect Robert Ullberg worked closely with Lyman-Morse and with Ring Power Corporation on the concept for this boat. Ring Power is the Caterpillar distributor for northern Florida and one of the largest Caterpillar equipment dealers in the southeastern United States. Powered by a pair of big Cats -- Caterpillar C-32s, in fact -- Ring Leader cruises at 39 knots and clocks a top speed of 43 knots. Of course, the boat is replete with the latest in sport-fishing amenities: two 600-pound-per-day ice makers for fish storage. Two bait freezers and fish box are under the cockpit sole. Three large tackle drawers conveniently located under the helm sole. The boat has 46-foot Rupp hydraulic outriggers and center rigger, and a variable setting fighting chair that transforms into a rocket launcher or live-well hookup. Each cockpit corner has plug-ins for downriggers, and both deep drop electric reels and standard reels. There is a large rod-storage locker in the bridge deck settee and four teaser reels on the tower. The interior cabinetry and bulkheads are no less striking, finished as they are in quarter-sawn teak. The cabin sole is maple, while burled walnut soles in the heads offer a unique twist under foot. There are (count ‘em) three plasma TVs, a granite salon table, state-of-the-art electronics, and crew accommodations for four. This all combines to make Ring Leader a stylish and comfortably fast ride—if I were a tuna, I’d be working now to put plenty of distance between myself and this boat. 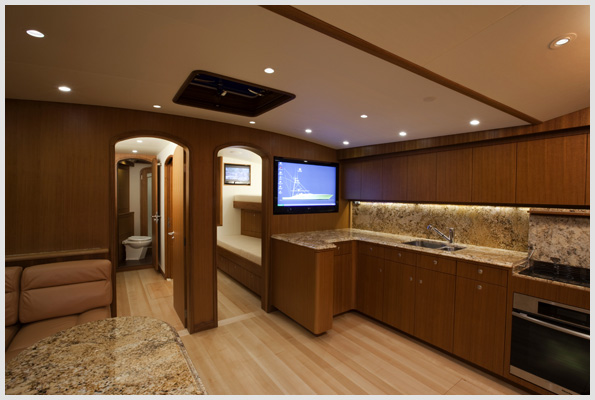 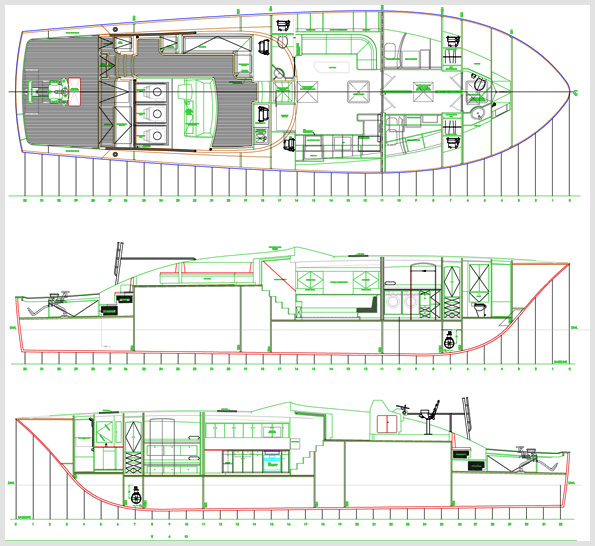 
Information and specifications supplied by the builder. Every effort has been made to ensure accuracy. However, Maine Boats, Homes & Harbors, Inc. accepts no liability in the event of any errors of fact or omission.