Is any prize worth risking grievous harm to oneself and others? 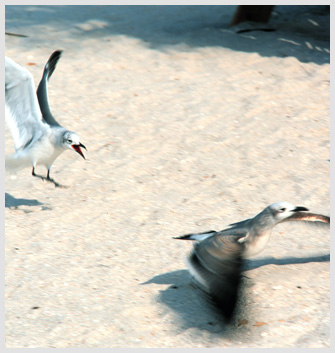 A herring gull tells a fellow gull who's boss.
Photo courtesy NOAA
I marvel at our continued ability as a species to act like jerks. Recently I watched a car on Route 1 abruptly veer from the right-hand lane to the left, then make a sharp turn nearly on two wheels with never a turn signal to be seen. Last week I saw parents bearing small children jostle with each other, hard, in order to maintain their place in line to buy a cookie at a downtown bakery. I frequently hear angry people on my street at night, screaming expletives at their pre-school children and each other. We are an aggressive lot and, unlike many other animals, our aggression often leads to real violence. Konrad Lorenz, an Austrian ethologist (the study of animal behavior), published a famous book in 1963 called On Aggression. Lorenz, who was well-known for his studies of bird behavior, argued that there are three basic functions of aggression: to balance species’ distribution; to select the strongest among a species; and for defense of the young. Aggressive behavior, he said, is hard-wired into animals and has a long-term impact on any species’ survival. Animal aggression is most often seen among males attempting to attract a mate and so propagate their genes in the next generation. Aggressive males, whether they be a mountain elk or a dragonfly, will defend their territories from other males. With a large territory come certain perks, such as more food or larger shelters. Females want to be assured of the resources necessary to rear their young so they often select males with ample territory as their mates. In addition, having an aggressive mate to protect the mother and her late-maturing young is a distinct health advantage. Yet aggression among animals as often takes non-lethal form. There may be cuts and scars and even severe impairment, but animals within the same species do not often kill each other outright. They use feints and signs to effectively express their aggression.

Photo courtesy NOAA
Dolphins, for example, are very social animals that co-habitat together for most of their lives in distinct pods. When they are ticked off, for reasons that perhaps only dolphins can define, they open their mouths wide. Pushed a bit further, a dolphin will start to nod his head as a sign of hostility. A truly aggressive gesture is violent jaw clapping—snapping the jaws together fast and sharply. Given that dolphin have an impressive set of teeth, that symbol of anger is likely not to be overlooked by a fellow dolphin. Herring gulls also use bluster to express aggression while avoiding real harm. A gull that has found a tasty snack or a good nesting site and doesn’t want to share tells the world of its intent by shrieking a loud, long call. If a fellow gull doesn’t get the hint and begins harassment, the herring gull will draw itself up to look larger, lower its bill as a signal it’s ready to strike, and extend its wings slightly from its body. Then it steps stiffly toward its opponent. That usually convinces the interloper that the prize—whatever it is—will not be worth the cost. One would think that lobsters, with their formidable armature, wouldn’t have to do much to convince intruders to back off. Actually, they generally flee rather than fight. Come upon one in the ocean and it will swing its claws before its head, curl its tail beneath itself, and try to scuttle backwards into a nice dark hole from which to wave its claws menacingly. 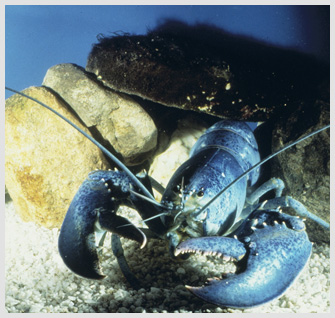 A male lobster defends his boudoir.
Photo courtesy NOAA
But when mating season comes along, lobsters are a little less retiring. A male lobster stakes out a shelter as the first step toward inducing a female to mate with him. The more dominant the male, the larger his shelter and the more likely he is to mate successfully. To defend his boudoir, male lobsters initially push interlopers out of the space with their claws. If the intruder doesn’t get the message, a lobster escalates his defense by grabbing at the other with a single claw or using his two claws as scissors, fencing with the other male. Finally, a male defending his shelter will rip at the body of the intruder, aiming to tear off a claw or cause enough harm to dissuade further aggression. When a female ambles into the shelter, however, the male lobster quickly changes tactics. She signals her sex by either showing her abdomen— a sign of submission—or releasing a chemical in her urine as a clue. Hostilities cease. So I wonder, as this hot summer draws to a close and the cool air of fall begins to lower our collective temperature: What prize is worth risking grievous harm to oneself and others through thoughtless driving? Is a cookie for your kid worth shoving another adult? Aggression is lauded in sports and action movies but out here, in the real world, I would favor vigorous clacking of jaw or straightening of spine over the mayhem we so often visit on each other.