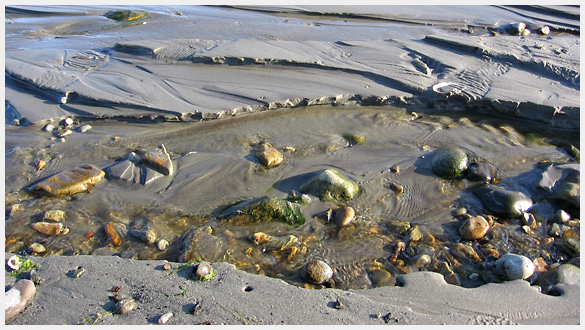 Photograph by Melissa Waterman
Click on image to expand.
Often when I am feeling worn by the numerous and terribly common details of living, I end up by the ocean. My most recent retreat was to nearby Lucia Beach where I flopped down upon my towel with a great walrus-like sigh, took off my glasses, and proceeded to study that which was before me: sand. You can’t go wrong with sand. Mix it together with a bit of seawater and an architectural portfolio of castles, battlements, and villages is yours. Stretch your body out on its warmed surface then bit by bit, wiggle your way down into a perfectly contoured chaise lounge. Or stare at it, as I did, up close and personal, and you will see myriad colors, shapes, and textures glinting before your eyes. We don’t have a lot of sand in this part of Maine. Most of the state’s 70 miles of sand beach lie below Casco Bay along the southern Maine coast, with the notable exceptions of Reid State Park and Popham Beach at the mouth of the Kennebec River. Southern Mainers have sand; we have rock. How come? Unlike Florida, with its talc-like white sands of ground coral and shells, Maine simply is not a sand-rich state. The Maine coast is bursting with rock, granitic rock at that. And granite is nearly synonymous with the word “hard.” Granite, an igneous rock (from Latin, ignis, meaning fire) is very tightly made; there’s not a lot of space between the individual mineral grains that make it up. Thus the rock is very heavy and very dense. It takes a long time for water to make its way into the rock and wear it down, in contrast to sedimentary rocks, such as sandstone and shale, that wear away much more quickly. Granite is more likely to fracture along internal fault lines, breaking into large chunks and boulders. In short, granite is not a good rock for making sand. 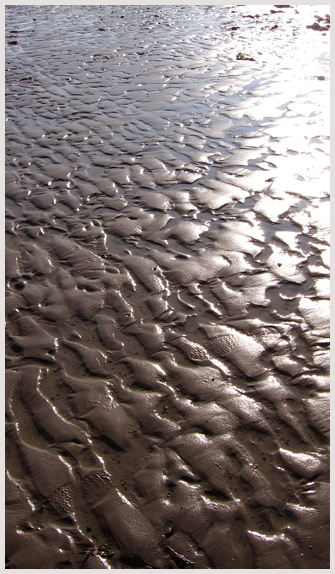 Photograph by Melissa Waterman
We can thank the glaciers for what little sand does lie along the shore. Maine’s sand, loose gravel, and other sediments are the products of the last ice age, which ended in Maine approximately 12,000 years ago. Some of these materials were dragged along on the bed of the glaciers as they moved back and forth over the landscape; others slid into the sea via meltwater streams as the glaciers receded. Keep in mind that those meltwater streams were fairly robust rivers. The heavier cobbles and boulders carried by the streams dropped out quite close to the glacier’s edge followed by gravel. Sand and silt, by contrast, stayed suspended in the water for great distances. These lighter particles ended up as deltas and fans that are now submerged beneath the Gulf of Maine. The tremendous weight of the mile-high glaciers caused the crust of the earth to sink. After the glaciers had retreated the crust started to rebound but very, very slowly. While the state of Maine was still a bit depressed, geologically speaking, the ocean rushed into the sunken area. The Gulf of Maine spread inland, extending far up the Kennebec and Penobscot river valleys. Sand and silt settled over the drowned landscape. This is a lengthy way of explaining that the sand on southern Maine beaches comes from inland areas. The sand is produced as glacial deposits that are found along the major rivers erode. Carried by the river’s current, the sand settles out at the river’s mouth where it is concentrated along the shore by the waves, currents, and tides. In some places, where these marine processes have been going on uninterrupted for thousands of years, major sand dunes have even come into existence. The great sand stretches of Popham Beach and Reid State Park, by contrast, appear to have formed not from river-borne glacial sands, but from the great deltas of glacial debris formed offshore as the glaciers retreated and sea level rose. Even the southern Maine beaches aren’t comparable in size to the vast barrier beach systems of the Carolinas or even the beaches of Cape Cod. Maine’s sandy beaches typically are rather small, bounded by rocky headlands. According to the Maine Geologic Service, only about 2% of Maine’s 3,500 miles of coastline are sandy beach. As everyone knows, these few beaches are fiercely fought over by municipalities and private owners alike. Given the rate of sea level rise along the Maine coast -- about one inch every twelve years -- worrying about ownership of a sandy beach is a little like trying to stem the tide with a broom. Still, it’s a pretty thing, the sand before my nose on Lucia Beach. Equal parts Ice Age sediments, ground mussel shells, bits of garnet and clay and feldspar, it catches the sunlight and crunches between my fingers. Just a few grains, from so long ago, sparkling on a gentle summer’s day.