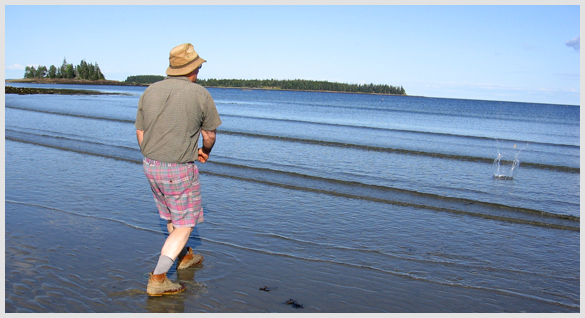 Skipping stones. It's a guy thing.
Photo by Melissa Waterman
I’ve always bridled a bit when someone referenced a certain activity as “a guy thing.” It’s the same feeling I have when a movie is called a “chick flick.” Yet I must admit that, after long weeks of scrupulous investigation, I can state with some authority: skipping stones at the beach is a guy thing. The life of an investigative reporter is not an easy one. In pursuit of this story I have spent numerous hours spying on the men-folk at Lucia Beach, taking notes on the visiting fathers and sons at the Owls Head Lighthouse beach, scrutinizing the male denizens of Crescent Beach through dark glasses, and similarly logging long afternoons at various shorefront locales along the midcoast. My conclusions are incontrovertible. From the time they can walk until they reach advanced dotage, men love to skip flat stones as far as they possibly can across the water. According to the Guinness Book of World Records, a gentleman named Kurt Steiner of Pennsylvania holds the record for the greatest number of skips, a staggering 40 bounces completed in 2003. The father and son I watched in Owls Head the other day weren’t up to that figure. The boy, perhaps six years old, understood the concept but hadn’t yet grasped technique. As stone after stone sank into the bay, an emotional tempest was evident in the boy’s face. That’s when dad stepped in.

Stones on the beach, West Quoddy Head, Maine
Photographer: Captain Albert E. Theberge, NOAA Corps (ret.)
“OK, now, you put this finger around the edge,” mild-manner dad said. “That’s right, right around the side of the rock. Now you bend your wrist, yup, just a little. Good boy!” The diligent student of flat rocks looked down at his hand and then up at his father with a slight tinge of suspicion. “Then you snap your hand out like this, like you’re throwing something away, so it spins. Got it?” The flat rock sank like what it was, a stone. “No, that’s not it,” said dad, a faint note of exasperation in his voice. More flat stones were procured, more lessons imparted, the tension at the beach increased as we all concentrated on this profound rite of passage. Would the boy follow the man, would a flat stone spin its way across the water, would the link between father and son be made? “Hey!” shouted the little boy. A single and fairly small flat stone skittered its way a few feet over the water, then sank neatly into the sea. “Hey!,” said dad. A smiling mother in a beach chair snapped a photo. The two males continued skipping stones into the ocean, and, with a collective sigh of relief, we all settled back into our various angles of repose. In the interests of science, I wish to report that the secret of successful rock-skipping has now been verified by none other than the French. A few years ago a team of young French physicists constructed a machine that would skip stones (actually flat aluminum disks of different shapes and dimensions) repeatedly. After numerous experiments that varied the speed, spin, and angle of the stone, the intrepid team discovered that stones hitting the water at 20 degrees will always skip the farthest. 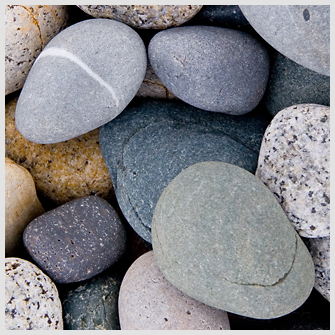 Photo by Jamie Bloomquist
Flat stones stay on top of the water in part because they are moving quickly relative to their size. Like a water skier, the faster the stone moves across the water the greater the upward force will be (for those physicists in the audience, the upward force is proportional to the squared speed of the stone). Even with adequate spin, however, if the stone hits the water at an angle of much greater than 45 degrees it will simply sink. If it comes in at less than 20 degrees, it will lose too much energy dragging across the water and won’t be able to skip many times at all. That 20-degree angle, say the French, is the key. In all honesty, I have nothing fundamental against “guy things.” The sexes are not the same, after all; each reserves to itself certain tastes or talents that give pleasure. I like to skip stones too, but not as assiduously as I’ve seen men and boys do this summer. So for all those guys out there gleefully skipping stones across whatever body of water presents itself, take note: the North American Stone Skipping Association stands ready to recognize your talents!

Are you looking for a basket case?