Illustration by Caroline Magerl.
The publication of this issue of MBH&H, the return of the Maine Boatbuilders Show, and the vernal equinox are the closest things to astrological events that boat nuts among us celebrate. The secondary pursuits we winter holdovers use as distractions—skiing, snowmobiling, ice fishing, or reading the “Boats of the Year” issue over and over—are cast aside at the first harbinger of our watery lust, our happy disease. For most of the last ten years of my dad’s life, we marked the spring with an outing to the Maine Boatbuilders Show. That pilgrimage ceased when the stairs became too steep and the walk from the parking lot a little long for him. For us it was a ritual of long standing; we had been going to boat shows together for nearly 50 years, first with him as the guide, later with me. My mother always went to the shows when I was a child, probably to demonstrate to all of us that she was in fact the most knowledgeable about boats.

Illustration by Caroline Magerl.
Capt. Pete’s commissioning tips Every boating magazine has to feature spring commissioning tips to get its avid readers ready for the coming season. None of our other faithful correspondents have taken on this task for Maine Boats, Homes & Harbors, so that burden falls to this column. I visited with Capt. Pete, who, you may remember, kindly supplied us in a recent issue with his Rule of the Equinoxes to guide our seasonal liquor choices. Herewith, his insights regarding getting the boat ready for the season. 1. Approach your vessel warily; it has been out in the cold and may be grumpy from lack of attention. 2. Crawl under the cover, find what’s left of last season’s booze, and drink it all before starting less important tasks. 3. Check muffler, if there is one, for squirrels. Dash off a quick note to any in residence advising of impending engine start-up. 4. Check bank account for available funds. 5. Crawl out, refasten cover, come back in July. That’s about it. Capt. Pete was unable to offer much else, busy as he was ensuring that he would have a little brown liquor left over at the vernal equinox. Dancing over the waves While we’re in the spring commissioning mode, consider this new piece of boat equipment: the marine dance pole. We received a note from a PR company regarding the adaptation of the ever-popular dance pole for marine use. It seems that the company, Lil’ Mynx (lilmynx.com), which produces a removable (as opposed to permanently installed) dance pole for home use, felt that there was an unfulfilled need for a seaworthy version, which mounts between a water-ski-towing or electronics arch and the deck. The home versions are billed as entertainment and exercise aids. I suppose that seeing one in use on a boat could in fact be very entertaining, although in Maine the principal use would be as a mosquito feeding station. My old Bristol 41.1 had a permanently mounted pole cleverly disguised as the conduit for the centerboard pennant, but I moved the pennant to another location, so there was no need for multi-tasking. I bet if I search high and low for the Lil’ Mynx booth at the Maine Boatbuilders Show I won’t find it. Bucky Fuller goes down From the Manchester (New Hampshire) Union Leader and Mainebiz, we learn of a new development in aquaculture that utilizes a geodesic dome-like cage for fish farming. Ocean Farm Technologies. (oceanfarmtech.com) of Searsmont, Maine, has a license to develop and manufacture the Aquapod™ sphere for deep-water fish farming. The sphere can be towed at up to 3 knots and positioned vertically, semi-submerged to facilitate maintenance and access, and fully submerged for protection from storms and traffic. The wire mesh fully encloses the sphere and provides better protection from predators than netting. Ease of movement and deep-water locations mitigate the spot pollution problems that have hampered large-scale fixed-pen operations. The spheres can be adapted to a wide range of species and conditions. The system is being tested by Great Bay Aqua-culture (greatbayaquaculture.com), of Portsmouth, New Hampshire. Great Bay currently produces fingerlings of four species for sale to fish farmers internationally. The mighty cod will rise again. Fox Island wind A theme we keep seeing in the Maine press is the interest in sustainable energy production. Ever since the Maine Yankee nuclear power plant closed, Maine’s reliance on foreign oil for electricity has gone from around 30% to 70%. Setting the debate about nuclear power aside, Maine clearly has much to benefit from shifting to local alternatives. A Vinalhaven special town meeting has overwhelmingly approved changes to the guidelines for a wind power project by the electrical cooperative, allowing the project to move forward. The guidelines defined projects based on size and established setback, height, and view impact standards. The last item is always going to be qualitative and contentious; one viewer’s definition of acceptable visual impact can be vastly different from another’s. Let’s hope that a project like this can avoid the battles faced in other places. There is a lot of information available from the Island Institute (islandinstitute.org) and their companion newspaper The Working Waterfront (workingwaterfront.com). They are great resources for the watchers of the Maine coast. A reason to know the way to Vassalboro Speaking of wind, a lot has been expended in the blogosphere about the following news tidbit from central Maine. In January, the Vassalboro Planning Board, observing that there was no ordinance guidance to the contrary, approved the application of one Donald Crabtree to open a donut shop featuring topless waitresses, which we take to mean sans clothes, not sans torso or simply balding. As one might imagine, the ruling drew a lot of opposition from many citizens. But, as the Waterville Morning Sentine observed, “Planners said they could not bar a business simply because of employees’ uniforms, or lack thereof.” Here on the porch we take no side in this debate, preferring to simply observe the rich tapestry of life in Maine. One recommendation I might make, however, is that any interested parties Google® the words “Vassalboro topless” and sample some of the news and the blogs that have weighed in on the subject. It seems to be a story with “legs” outside our little corner of the country. 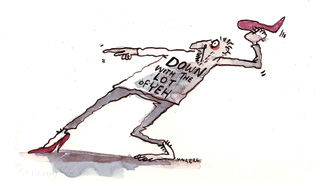 Long-time MBH&H Contributing Editor, freelance writer, and raconteur Peter Bass is an owner of Maine Cottage Furniture. Click here to read other articles by Peter Bass >> Submit your comments... newsy tidbits, photos, illustrations, clippings, rants, and raves for possible use the form below. Or mail to “View From the Porch,” P.O. Box 758, Camden, ME 04843 or fax to 207-236-0811. Items may be edited for length and clarity; materials become the property of Maine Boats, Homes & Harbors, Inc.