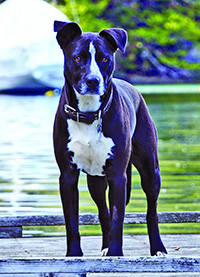 Carter, a perfect blend of various unknown breeds, is a rescue dog who arrived in Maine about seven months ago after spending the first year of his life in Tennessee. It has taken this former flatlander a few heart-to-heart conversations and a lot of turkey treats to realize that he's actually into boating. While Carter has found his sea legs, his preferred activities include taking his owners, Audrey Hodgdon and her fiancé Caleb Easton, for long walks on the Boothbay Region Land Trust trails and (unsuccessfully) attempting to befriend porcupines. During the week, Carter is the official marketing dog for Hodgdon Yachts in East Boothbay, where Audrey, the daughter of Tim and Cathy Hodgdon, works as marketing manager and Caleb works in the service department. Audrey, who moved up from Portland last fall to join the company, is the sixth generation of Hodgdons to work at the family-owned yard. 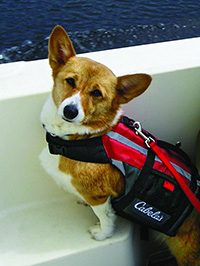 Pattie is a newbie, and not a swimmer, but that didn't stop the stalwart dog from taking a two-day boat ride last fall from Spruce Head to Boothbay Harbor, through Townsend Gut, up the Sasanoa River to Bath, and up the Kennebec River to Augusta, and back. It was her first time on the water, and she wore her lifejacket as a precaution, as all boater dogs should. She was accompanying her colleagues, Susan DeWitt Wilder and Paul Austin of Scarborough, Maine, on a friend's 21-foot Parker powerboat. Pattie practiced using her sea legs again this spring on Jarrett Bay in North Carolina, accompanying her humans on another short cruise. When the three boats in her own backyard "boatyard" in Maine eventually get restored, she'll be spending even more of her time on the water, always wearing her lifejacket, of course. Do you have a dog that helps on your boat or accompanies you alongshore? We’d like to see your water-friendly canine. Email a clear photo and pertinent details to editor@maineboats.com or mail it to Boatyard Dog, P.O. Box 566, Rockland, ME 04841.