Rowing shells, ties to the Arctic, a Whaler Rendezvous and more 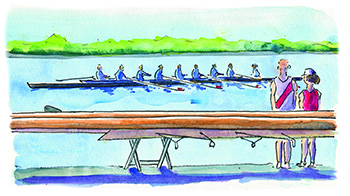 Illustration by Ted Walsh
First a boatbuilder, now a movie star Long-time boatbuilder Ralph Stanley of Southwest Harbor, Maine, has been named a national treasure and been the subject of more than one book, but his most recent title is Movie Star. Maine filmmaker Jeff Dobbs has made Ralph Stanley: An Eye for Wood, a documentary film about the extraordinary life of the world-renowned Maine master boatbuilder. Stanley, the son of a lobsterman, grew up on Mt. Desert Island and began building wooden boats in the early 1950s. He has built more than 70 wooden boats including working lobsterboats, Friendship sloops, yachts, and rowboats. He is also known as a master storyteller, genealogist, and musician-in recent years he has built several fiddles for himself and for clients. We invited a friend several years ago to hear Ralph play his fiddle at the Penobscot Marine Museum. She was really exited to see such a famous musician play in such a small venue, which confused us since Ralph is more famous for his boats than his tunes. Turns out he shares a name with a well-known banjo-playing bluegrass star. We wonder: do people go to that Ralph's concerts expecting him to build boats? Mystery boat launching A few days short of the summer solstice, close to midnight on a moonless night at an unnamed harbor in an undisclosed location somewhere in downeast Maine, a 74-foot-long, state-of-the art, cold-molded sailboat was launched before a small crowd of anonymous well-wishers at a well-known boatyard. After she had settled on her lines on the quiet waters, a tall, bespectacled man, who was believed to be the owner, said a few complimentary words about the skill and dedication of the crew of shipwrights who had built the vessel, which is an example of workmanship at the very highest level. The above information is all we knew until we received our copy of the Ellsworth American and learned the rest of the story from reporter Stephen Rappaport who was at the launching. According to Rappaport, naval architect German Frere designed the hull and rig of the boat. California-based architect Frank Gehry, who is known for his curvy, metal-wrapped buildings, designed the boat's interior, along with other elements including intricate deadlights and skylights, according to the American. The newspaper also reported that the new yacht will eventually make its way to the west coast and Marina Del Ray in Santa Monica, California, where Gehry himself will have the chance to take it out sailing. The boat was built at Brooklin Boat Yard. Yard owner Steve White declined to discuss the project, which was kept hush-hush for its two-year duration. Who caught that fish on your plate? The Maine Coast Fishermen's Association in Port Clyde has won a $175,000 federal grant to develop a program that would let consumers know more about the fish they are about to purchase. The Fishermen's Association will work with the Gulf of Maine Research Institute and Hannaford Supermarkets to develop a system that tracks seafood from the boat, through the supply chain, and all the way to the grocery store. The goal is to eventually allow consumers to scan a tag at the store and see where and when the fish was caught, and maybe even learn the name of the person who caught it. Calling all Whalers We hear stories all the time from readers about the fun they had in their Boston Whaler when they were young. These tough versatile boats have been the ticket to ride for generations of teenagers and adults. So it's fitting that this summer, a Boston Whaler could be your ticket to the 13th annual Maine Boats, Homes & Harbors Show in Rockland, August 14-16. Among the new events at the show will be a three-day Boston Whaler Rendezvous. Enthusiasts and dealers from around the region are invited to trailer in their iconic boats, show them off, share their stories, and then celebrate at a special party on Saturday evening. Owners can display their Whaler (of any vintage) on show grounds during the weekend in exchange for weekend admission for up to four people and a free one-year subscription to this magazine. Also this year the show will include a special refit dock, featuring old yachts expertly made new again. Several iconic Maine vessels will visit during the show, including Maine Maritime Academy's historic schooner, Bowdoin, and the Maine Sea Coast Mission's vessel, Sunbeam V. Food trucks from around the region will gather for a food truck rally. The Hurricane Island Foundation Center For Science and Leadership has organized hands-on marine science activities for kids, and as always, the World Championship Boatyard Dog Trials will take place Sunday morning. For more information about the show, to sign up for the Whaler Rendezvous, or to purchase show tickets, visit www.maineboats.com/boatshow.