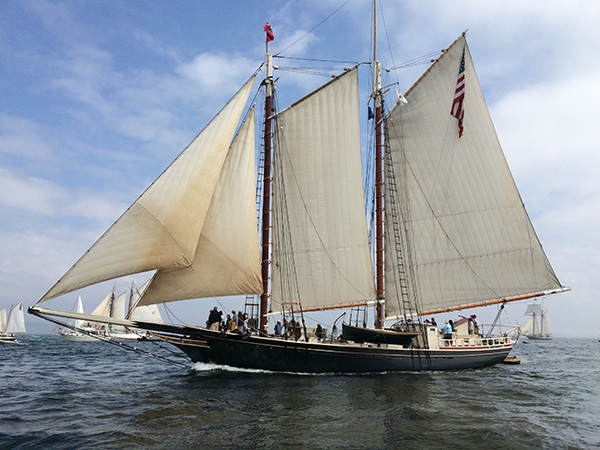 Schooner Stephen Taber has been declared a National Historic Landmark. This year, Camden Harbor will be filled with the country's largest gathering of windjammers in celebration of Maine's maritime heritage September 4-6, 2015. The fun includes a Maritime Heritage Fair, a schooner parade, a talent show, and a fireworks display over Camden Harbor. The three-day event also includes a Lobster Crate Race, a Build-A-Boat Contest, and a fast-paced relay race involving lots of small slippery fish. The cruising schooners are open for tours Saturday and Sunday afternoon. Or take a ride on one of the smaller schooners to get a taste of the seafaring life. All Festival events are free to visitors and exhibitors, making this a true community event. Visit http://www.camdenwindjammerfestival.org for more information, schedule of events and the latest news.

If you're not able to attend the Camden Windjammer Festival, the Maine Windjammer Association (www.sailmainecoast.com) will host the 29th annual WoodenBoat Sail-In on Tuesday, September 15. Cabins are still available for 4- and 6-day cruises that include an overnight stop at WoodenBoat headquarters in Brooklin. Spectators can enjoy great views of the entire fleet as vessels arrive mid-afternoon. Onshore festivities include steel drum music and steamed mussels. 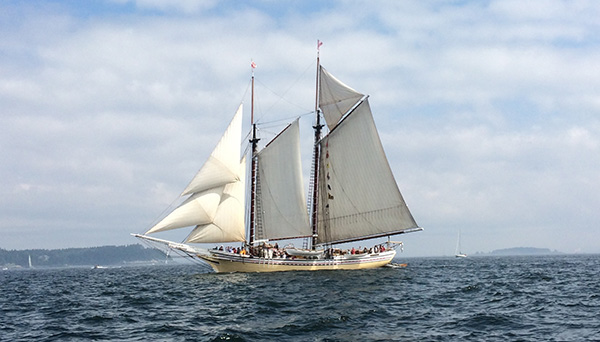 Schooner Heritage sailing in Penobscot Bay is one of the newest vessels to offer passenger overnights. Maine's windjammers are iconic symbols of the coast. While a significant number of the schooners are based in Penobscot Bay, others sail out of ports in both southern Maine and downeast. Many different schooners offer day sails. Here is partial list of some of the windjammers offering overnight cruises.

American Eagle, based in Rockland, Captain John Foss and his crew offer cruises ranging from two to nine days. http://www.schooneramericaneagle.com

Angelique, based in Camden, is known for her red sails. http://www.sailangelique.com

Heritage, captained by Doug and Linda Lee out of Rockland, is the fleet's newest windjammer. http://www.schoonerheritage.com

Isaac H. Evans, based in Rockland, began its career as an oystering vessel in Delaware Bay. http://www.schoonerisaacevans.com

J. & E. Riggin, based in Rockland, offers multi-day cruises, many with themes such as food and knitting cruises. http://www.mainewindjammer.com

Lewis French, built in 1871 and based in Camden, is said to be the oldest commercial sailing vessel in the U.S. http://www.schoonerfrench.com

Maine Windjammer Cruises, based in Camden, offers multi-day cruises in Penobscot Bay aboard the Grace Bailey, Mercantile and Mistress. http://www.mainewindjammercruises.com

Mary Day, based in Camden. Built in 1962, the Mary Day was the first pure coasting schooner built in Maine since 1930 and she was the first vessel built specifically for the windjammer trade. http://schoonermaryday.com

Stephen Taber is based in Rockland. A National Historic Landmark, the Taber was built in 1971. http://www.schoonerisaacevans.com

Victory Chimes, based in Rockland, is the only three-masted schooner in the Maine fleet. http://www.victorychimes.com

Memories of a Perfect Anchorage