It took a park, a college, a helicopter, and dedication 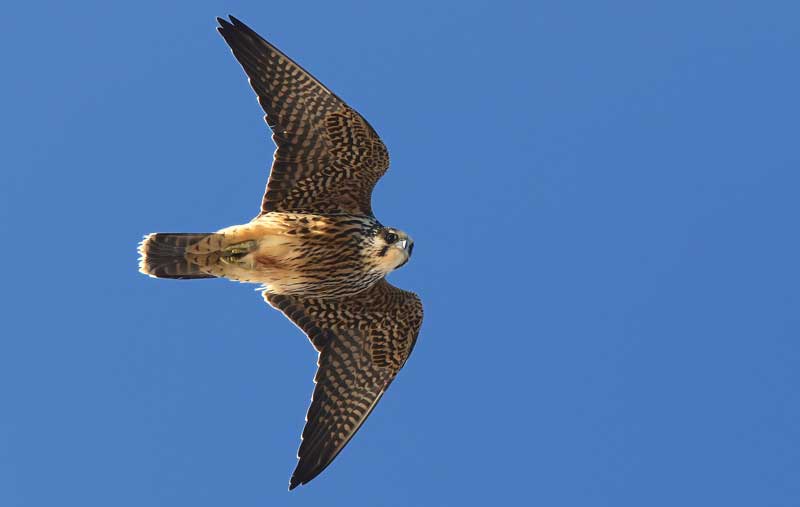 Peregrines weigh about 2 pounds and have a wingspan of up to 3 feet. Their normal flying speed is 40-55 mph, but when diving for prey they can hit speeds of up to 200 mph. This photo was taken in Acadia in 2016. Photo by Peter Duley

The alert is posted in early spring: “Acadia National Park Precipice Trail is closed.” It’s a sign that the cliffs—towering more than 1,000 feet above the sea—have become a nursery, guarding peregrine nestlings as celebrated as any new baby. The presence of the falcon and the closing of Acadia’s trails are now so routine that it’s hard to remember that until recently, the peregrine was absolutely absent—extirpated—from Maine and the entire Eastern seaboard, and one of the first creatures listed as endangered in the United States. Its recovery marks an early success of the listing effort, as well as one of the earliest collaborations between Acadia and what was then the fledgling College of the Atlantic in Bar Harbor. 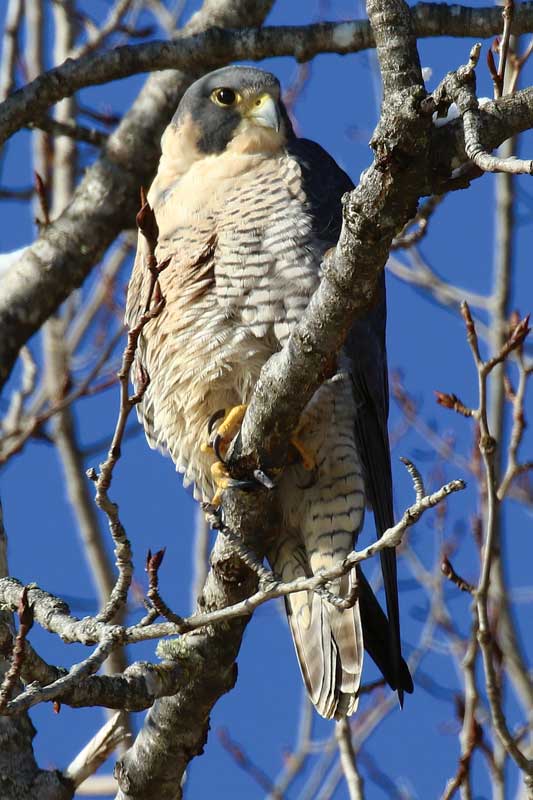 Peregrines use their notched beak to kill their prey by severing the spinal column at the neck. Due to the huge success of efforts such as in Acadia, the U.S. Fish and Wildlife Service removed the species from the Federal list of endangered species in 1999. Photo by Seth Benz Until the early 1950s, some 400 peregrine pairs nested east of the Mississippi, Acadia included. By 1965, while falcons were still visible, not one was breeding. The cause? Mostly DDT-weakened eggshells. Though the United States banned the chemical in 1972, the damage had been done. If Americans were to again see this swiftest of all creatures in its spectacular hunt, literally swooping straight down from the heavens at speeds of up to 200 mph, wings tucked, to grab another bird in its talons, something would have to change.

Something did change. In 1970, the year the peregrine was listed, Cornell University ornithologist Tom J. Cade launched the Peregrine Fund. He used the methods of falconers, who for millennia had been raising chicks without domesticating them, to aid in hunting. He bred the birds using artificial means, nurturing their first weeks, then monitoring their release in carefully chosen sites—a process known as hacking. It worked. Falcons gradually returned to cliffside ledges to build their aeries, or nests, and successfully breed. Yet only inland locales had been tried, not coastal ones.

Enter the late Bill Drury, a COA faculty member in biology and a passionate ornithologist. The possibility of seeing peregrines soar over Acadia led Drury to lobby officials in both Bar Harbor and Acadia to join the Cornell endeavor. The same dream also inspired COA student Peter Duley. The college requires an intensive, term-long project of its seniors. Drury was a firm believer in learning-by-doing, even such professional doing as reintroducing an extirpated species to a popular national park. The return of the peregrine to Acadia became Duley’s senior project. 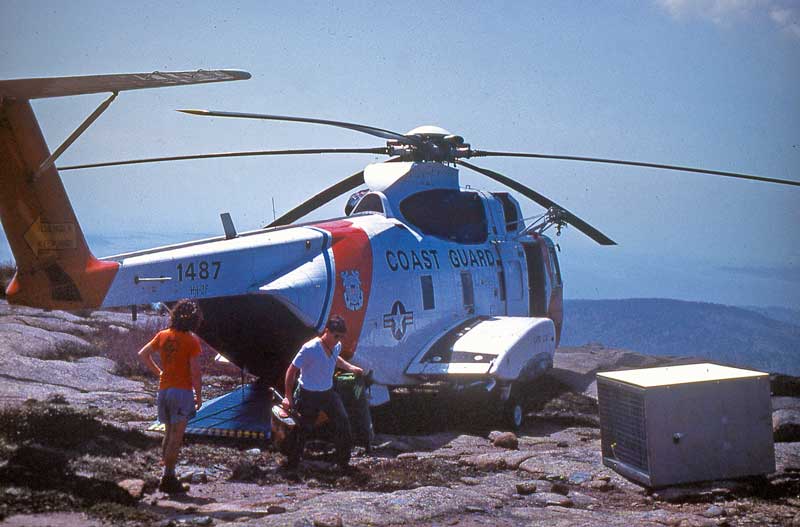 By day and night, Duley—who is now a fisheries wildlife biologist for the National Oceanic and Atmospheric Administration in Woods Hole, Massachusetts—scrutinized former aeries and potential new ones. While the Precipice Cliffs were considered, Drury felt that park management would be hesitant to close a popular trail, so he and Duley focused on Penobscot Mountain’s Jordan Cliffs, more than 500 feet above Jordan Pond and well beyond the forest canopy where great horned owls might lie in wait for an unsuspecting chick. The cliffs offered a good vantage for observation, excellent ocean vistas where the young birds might eventually hunt, and protection from disturbance. The park and Cornell approved the plan. Still, it was a long, steep way up. 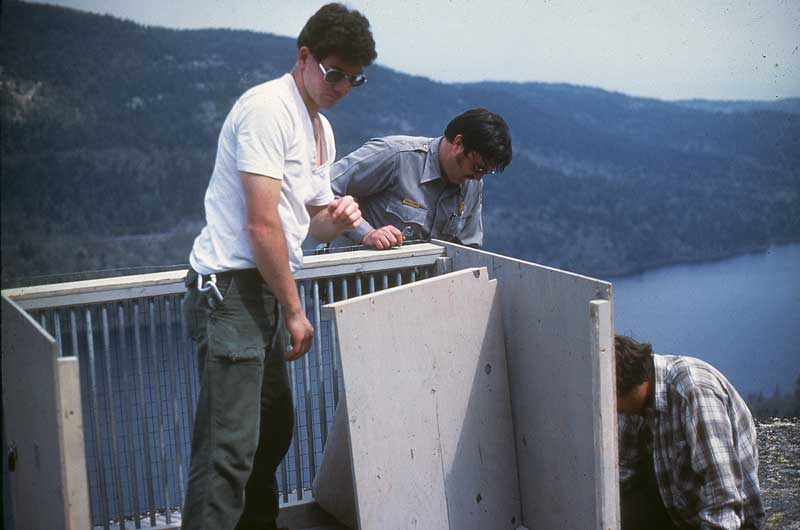 Enter the Coast Guard, which helicoptered a tent platform to the site, along with enough plywood to build a 5 'x 4' x 3' box to house the chicks. The rest of the gear was carried up by hikers. That included the chicks themselves, carefully ensconced in pet carriers. It also included the box front—heavy metal bars that would allow the chicks a birds-eye view until they were ready to fly. 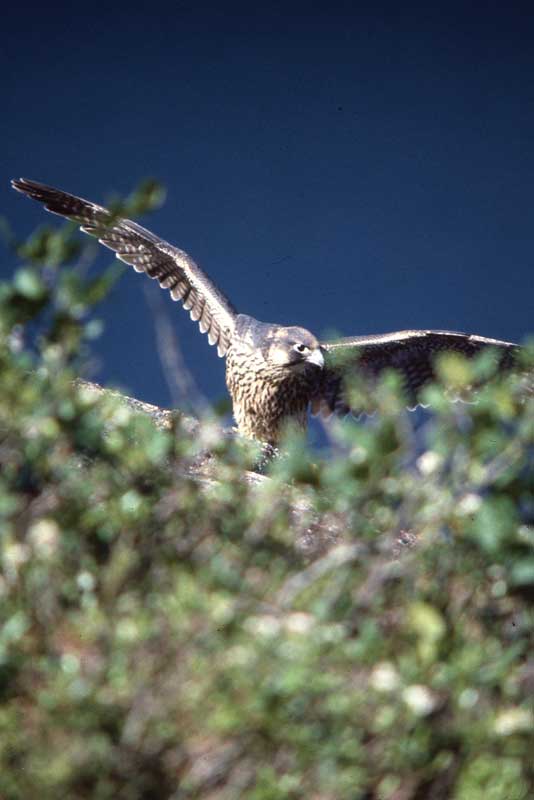 An immature falcon lands in the brush atop Jordan Cliffs. Photo by Peter Duley Drury took careful notes. “Seven young eyases, two tiercels and five females, arrived,” he wrote in 1984, “and were placed in the Jordan Cliffs hack box on May 29, 1400 hours, the tiercels more advanced than females. Overcast raining heavily with wind gusts 50-60 miles per hour, but all appeared healthy.”

The task of the workers was to feed and observe while remaining absolutely out of sight, so the chicks would imprint on the cliffs, not their feeders, and thus might return to breed.

For Duley and his fellow monitors, these weeks were, well, just plain dull. Drury’s notes warned of these long, tedious stretches, “sitting motionless while watching thru the peepholes,” remaining unseen while assuring that the birds were eating. But, he added, “Your dedication is what will make this project a success.”

Still, the tenders got to do what no one else could: camp upon an Acadia mountaintop. COA alumni from that era relish the memory of joining the observers on the blueberry field that was their tent site, building campfires high over a canopy of birch, maple, and red spruce. Food delivery came by foot. From 1984 to 1986, for something like eight weeks each summer, it was the job of COA alumnus Kyle Jones to hike frozen chickens and buckets of ice up the mostly vertical trail to feed the birds and also preserve the observers’ food.

Eventually, the chicks began fluttering their wings; they were nearly ready to fly. It was time to raise the bars, allowing the fledglings to venture onto the granite cliff. Jones, now chief of resource management at the Marsh-Billings-Rockefeller National Historical Park in Vermont, recalled the day the bars were raised. “We had to be quiet, but we were quietly excited. Especially when the front of the box came off. Sometimes the bird would immediately fly; that was too early. Stretch and flap and hop, stretch and flap and hop—that’s a better release.”

Moving from behind, so the chicks wouldn’t see them, an observer would raise the metal bars of the box, then watch the fledglings’ behavior for the rest of the day. Each bird was marked—there was a lot invested in them, and this was a vulnerable time. They were not yet hunters, nor were they safe—would they survive?

In the wild, peregrine parents feed fledglings on the wing for up to six weeks as the young learn to chase prey. These birds—untouched by hand, wing, or beak—would have to go it alone. It was exciting.

“We’d see them playing with one another; if there was an eagle or turkey vulture or raven they’d make a pass just for fun,” recalled Duley. The food left in their boxes meant that the birds would return until their instincts of swooping to the attack kicked in, and they were ready to adventure off. The observers remained until the last of the falcons were absent for at least three consecutive days. 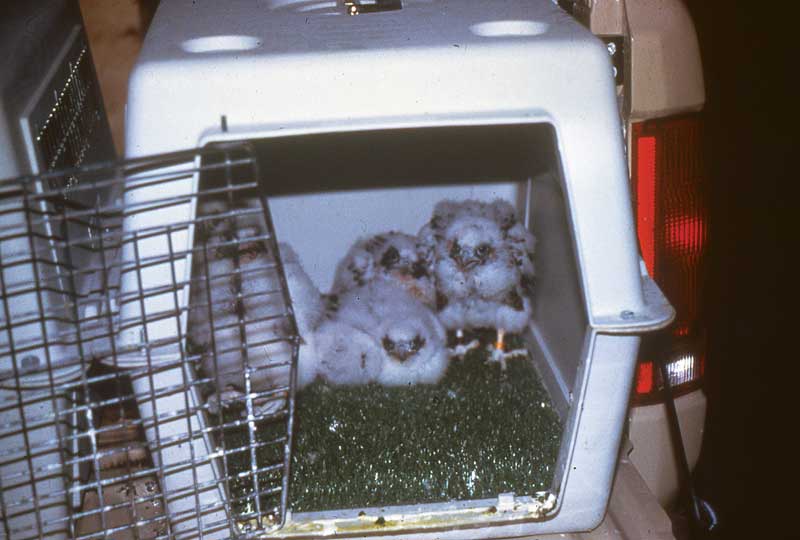 Between 1984 and 1986, 24 peregrine chicks were successfully hacked on this high cliff face overlooking Jordan Pond, but only in 1987 did an adult return. Immediately, the hacking program was discontinued. Peregrines are fierce creatures, so protective of their territory that they might prey upon fledgling chicks. Year after year, peregrines were seen high over the cliffs, yet not one of them nested. Finally, in 1991, a male arrived, then a female. Through dives, loops, and rolls, the tiercel courted his mate. That pair nested, and for the first time in 35 years, a peregrine family soared over Frenchman Bay.

Female peregrines choose the nest site; this one preferred the ocean view of Acadia’s Precipice Cliffs. Since then, said Acadia biologist Bruce Connery, “at least one and sometimes four pairs have produced young in the park, bringing the total to more than 130 chicks.” In 2017, three breeding pairs returned, including one to Jordan Cliffs. With gratitude, the park has closed trails in and around Precipice, Jordan, and Valley Cove cliffs, offering quiet privacy to nurture these most formidable birds of prey.

Donna Gold is a writer and editor living in Stockton Springs. She is founder and editor of COA, the magazine of College of the Atlantic, and also runs a business helping people and communities preserve their memories and histories. FMI: www.personalhistory.org.