Downsizing doesn’t have to be boring 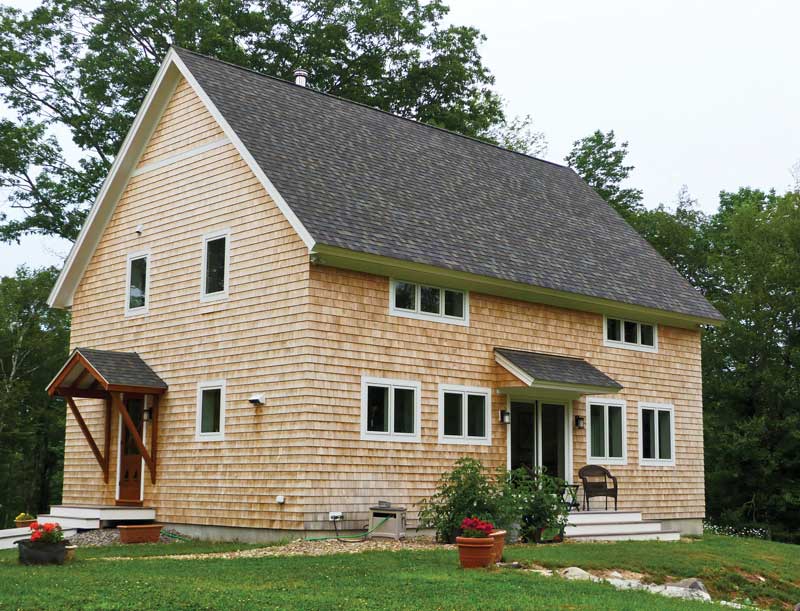 When the time came to downsize, the Sampsons wanted their new home to be energy efficient. The design was based on a plan from Holland and Foley’s Small Planet Homes collection. Photo by Lucas Fischer

“You spend a lot of time in it so you might as well have fun,” said Jula Sampson of her home, after describing the blistered Caribbean heart pine paneling adorning the upstairs bathroom of the house that she and her husband, Paul Sampson, built last year. 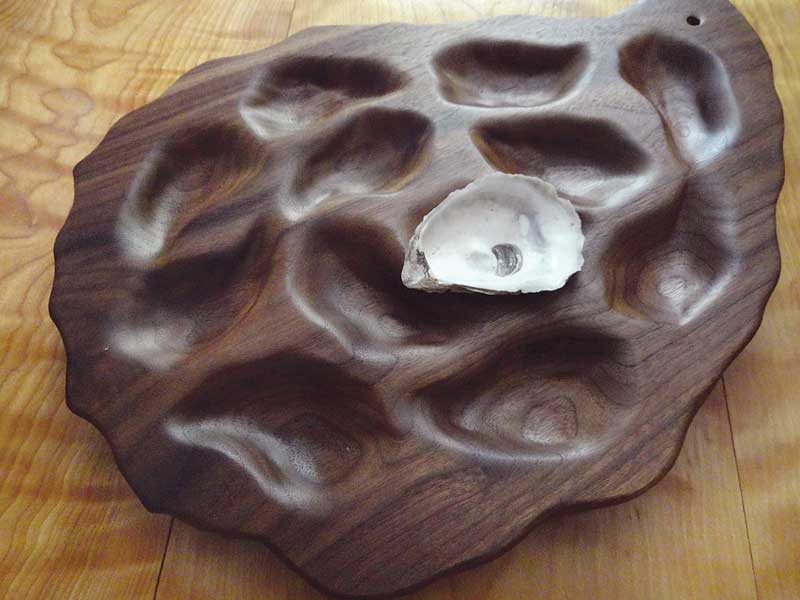 In addition to his work at AE Sampson, Paul Sampson carves artful wooden platters for oysters. The hand-made platters are marketed under the name Oyster River Joinery. Photo by Emma Sampson The Sampsons own AE Sampson and Son, a Warren-based provider of high-quality wood products. For the last 30 years, the company has carved out a reputation as a premier flooring source. This is because the wood that enters the facility is handpicked for quality, and because the Sampsons know how to gauge their clients’ needs, helping them find the best types of wood for different applications.

This knowledge was handy when the time came to downsize into a new house for themselves. For example, the walls of a basement stairwell are subject to abuse that can result in dings. For their basement access, the Sampsons chose ash because its busy grain makes a great paneling to camouflage those dents.

After 32 years in a big home in Lincoln­ville, the Sampsons had specific goals with their new house. They wanted it to be energy efficient, to accommodate changing needs as they aged, and to showcase their company’s wood products. 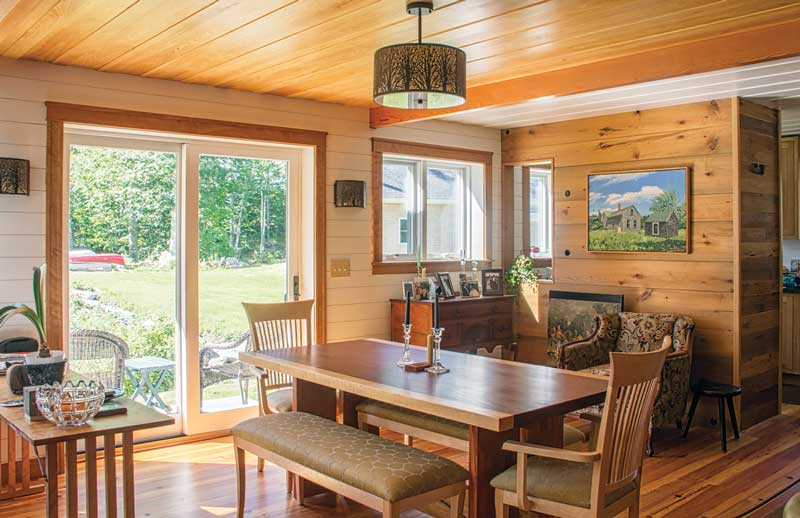 The dining room features many different kinds of wood, including hemlock boards reclaimed from the former Edwards Dam in Augusta that were used to panel the wall between the dining area and kitchen. Photo by Emma Sampson

They worked closely with Holland & Foley Architecture of Northport on the project. Vision Builders of West Rockport handled the actual construction.

Initially, the Sampsons picked a design from one of Holland & Foley’s Small Planet Homes, a collection of comfortable, open-concept house plans. They then worked with the architects to adjust the design for greater energy efficiency and to suit their specific needs. For example, while the original kitchen design incorporated an open-island concept, Jula preferred a separate galley-style kitchen. 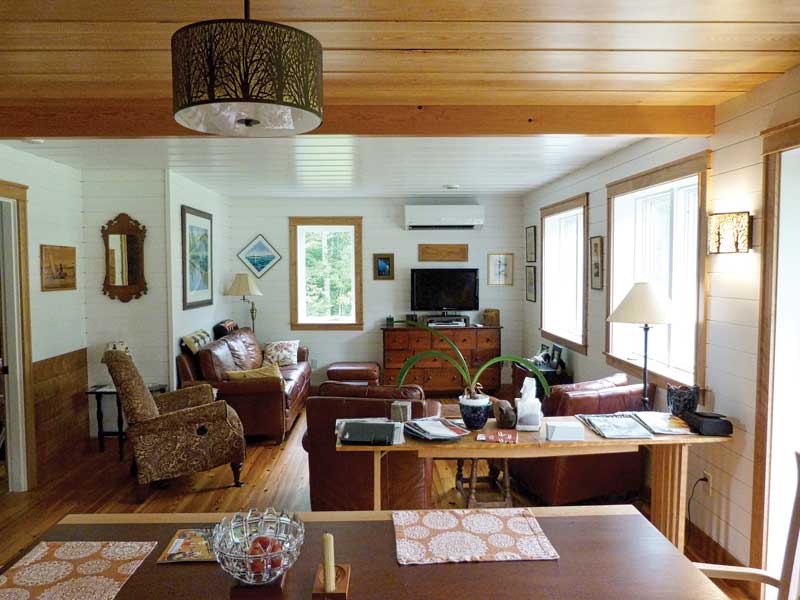 The painted wood paneling in the living room makes the room feel cozy, yet spacious and filled with light. Photo by Lucas Fischer

“I grew up camping and boating, so I really liked the idea of a galley kitchen,” she said.

The design of the house lends itself to energy efficiency. A small overhang was added on the south-facing side, the side with the most windows. In the winter months, when the sun is low, light streams in these windows and warms the house. In the summer, when the sun is higher up in the sky, the overhang blocks out some of the light and allows the house to remain cooler during the day. Double-glazed windows were used on all walls except the north side, where triple glazing provides extra insulation for the small windows. The exterior walls are double-studded, and eleven-and-a-half-inches thick with sprayed insulation. Two heat pumps provide heating, cooling, and humidity control. 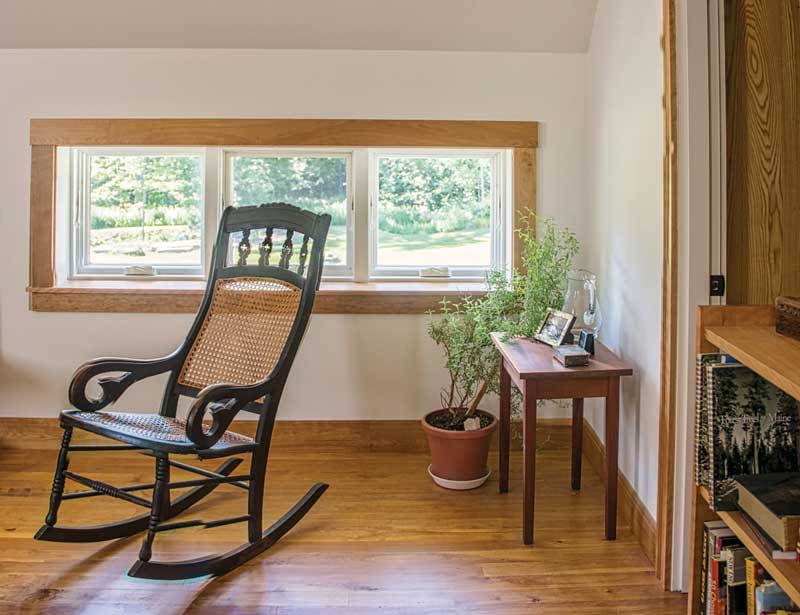 The upstairs windows are tucked into the eaves. Photo by Emma Sampson

Thinking ahead to a time when old age might impose mobility constraints, the Sampsons made sure most of the doorways were 36" wide and without thresholds. This allows for easier movement between rooms and can accommodate a wheelchair if needed. A downstairs bedroom was incorporated to provide for single-floor living if necessary. 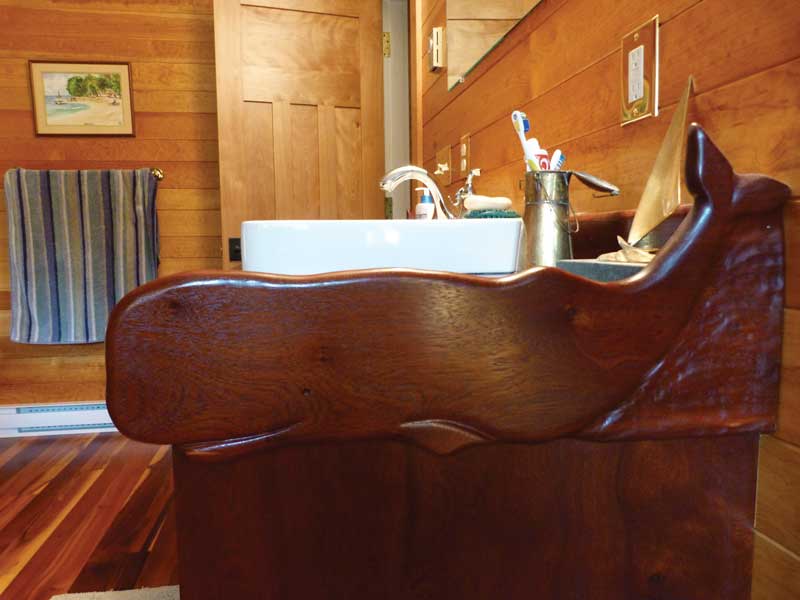 A vanity built by Paul Sampson displays carved whales at either end. Photo by Lucas Fischer

Lastly, and very importantly, the Sampsons wanted their new home to showcase their work and what they can do with wood. They also wanted to experiment with new ideas and combinations. Jula said she often hears from customers who think that different kinds of wood will clash when used in the same house. She disagrees. 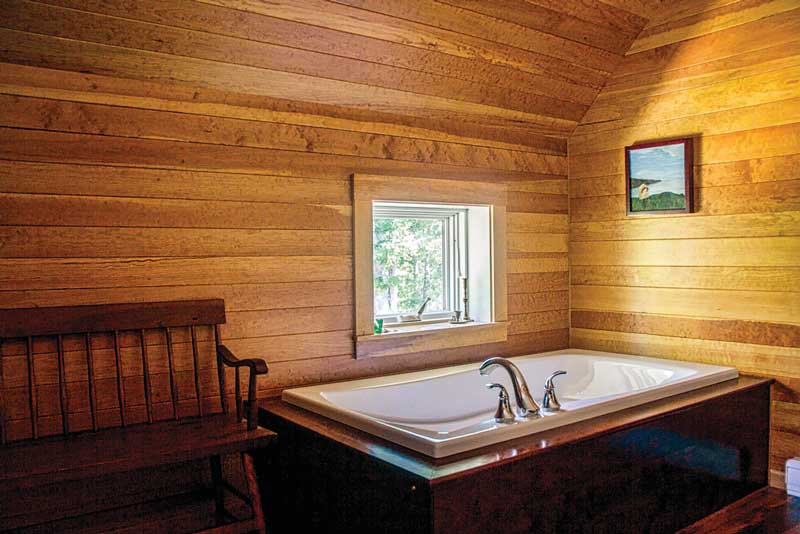 Each of the two upstairs bedrooms features a different type of flooring, red birch in one and walnut in the other. The dining room has several different kinds of paneling, flooring, and wainscoting. 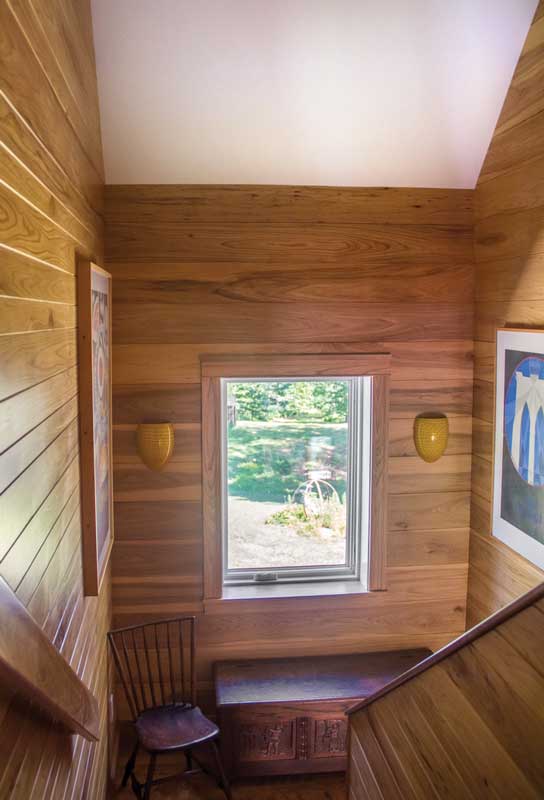 The staircase landing has room for a chair and chest, and a view of the mountains. Photo by Emma Sampson While they enjoy the open design, Paul and Jula still wanted their home to feel cozy. They did that with wood. The dining room ceiling is paneled with cypress in varying thicknesses, and the living room ceiling features white painted poplar boards. In addition to adding a feeling of warmth, the wood panels make the ceiling seem higher than it actually is.

“We looked at Frank Lloyd Wright and the way he did ceilings. He did them by varying the board thicknesses, which actually makes the ceiling seem higher,” Jula said.

And, of course, the Sampsons were able to incorporate wood left over from the company’s other projects. They used some pieces with irregularities that were sitting around in their shop as trim. These irregularities add character, said Jula, and are part of the natural beauty of wood.

The two pieces of bird’s-eye birch comprising the sides of their dining room table have an interesting back story. AE Sampson and Son used to provide this birch to the automobile manufacturer Lexus for use as trim on gear selector knobs in some of the company’s cars built in North America. Because these two particular pieces had slight irregularities they couldn’t be used by Lexus. So Paul found another use: his table. 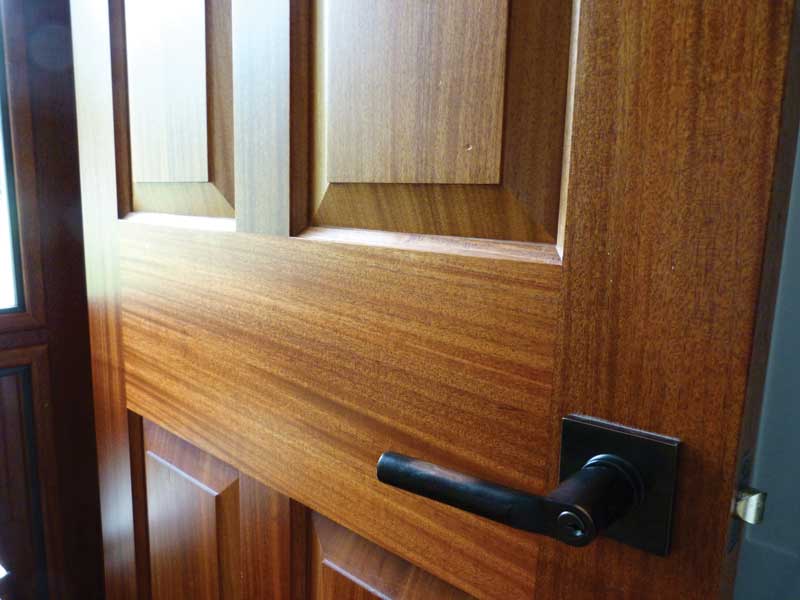 Paul Sampson made all the doors in the house. Photo by Lucas Fischer The long, horizontal planks used for paneling the dividing wall between the dining room and the kitchen were sawn from hemlock beams salvaged from the Edwards Dam in Augusta. The dam was removed in 1999 to open up the river for spawning fish, including salmon.

“That’s kind of special,” said Jula. “I’m a conservationist and liked the idea of fish being reintroduced to their natural range.”

She has placed two urchin shells and an epiphyte or “air plant” in knotholes in the planking.

These sorts of details are all part of the attraction of wood interiors, said Jula. Those holes might have been viewed as a flaw by someone else. For her they were an opportunity.

Lucas Fischer, a junior at Camden Hills Regional High School, enjoys architecture, cars, and being on the water. He lives in Rockport.