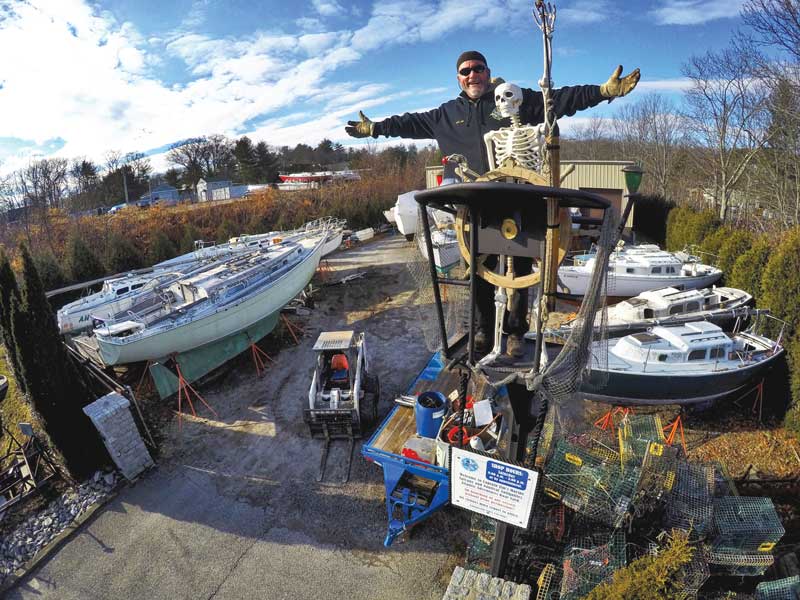 Late autumn’s somber light and landscape are no match for Jim Harkins’s enthusiasm for the business of dismantling and recycling old boats. And he never misses a chance to find levity and mirth where a few tears might also be mixed in. Photographs by Robert F. Bukaty

When a nasty October gale blew up the Maine coast last year, Jim Harkins was ready to get to work. Boats washed ashore and destroyed in the storm were a loss to their owners, but a gain to Harkins, who makes his living recycling old boats and boat parts.

“I sort of got into it just by accident,” said Harkins, a Portland native and longtime habitué of the Forest City’s waterfront. “I had a (hydraulic) trailer for my own boat and people just kept asking me if I’d haul this or come get that. Before I knew it, I was into all this,” he said, punctuating his comment with a sweeping gesture toward flotsam, jetsam, and eminently reusable nautical stuff on his three-acre site. 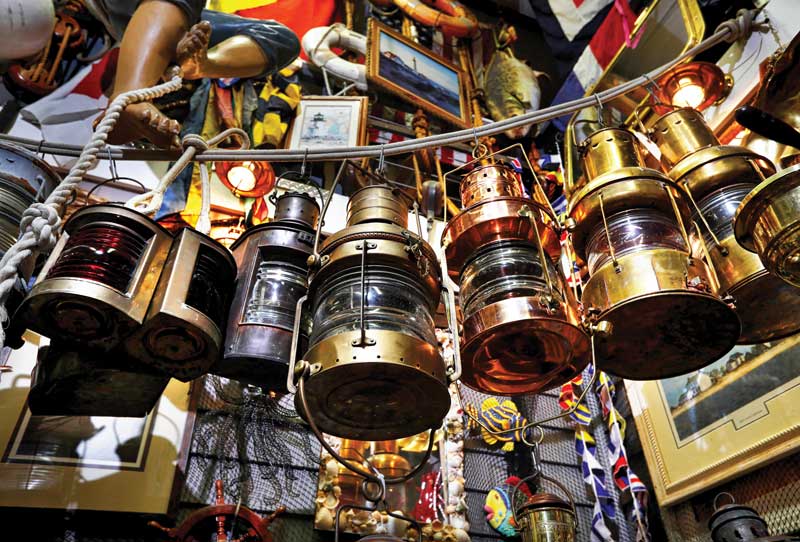 Brass lanterns are treasured by interior decorators from far and wide who haunt the ongoing nautical flea market.

A 3,000-square-foot warehouse shelters an ongoing nautical flea market. The rest of the lot, off Presumpscott Street in the city’s industrial north end, is covered with boats, cheek-by-jowl, with hardly a walking path between them. Almost all of them are destined for Harkins’s recycling program, an operation that he says is as much a labor of love as it is financially successful.

“It may sound corny, but I really like to help people,” the 57-year-old entrepreneur said. “Some of these boats have been in families for decades and now the kids have grown up and they don’t want the boat. And the owners aren’t able to enjoy the boat anymore. So, reluctantly, they call me. And that means I have to be extra nice to them during the whole operation.” 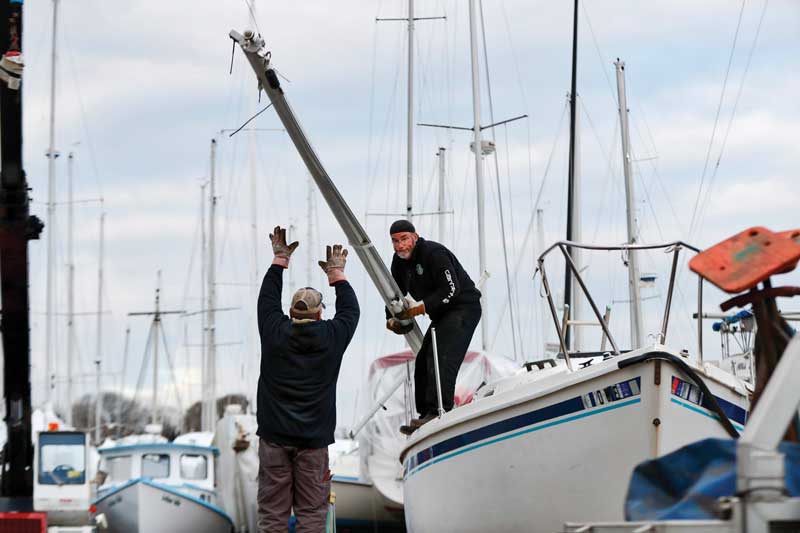 Grunt work is the everyday hallmark of the boat recycling business. Old aluminum masts are often worth no more than the metals in them but working roller furling gear can help turn a profit.

When boats are blown onto a beach, up on the rocks, or stuck on a jetty—as was the case along the Maine coast last October—Harkins and his crew of five take extra care. Many of these smashed-up boats will end up as part of his recycling operation.

Harkins knows what he’s talking about. His experience with boats and boat people stretches back to his childhood when he’d take his fishing pole down to the wharves of the Portland waterfront and try his luck. “I always loved being outside,” he recalled. “I couldn’t stand being in school or indoors. I always wanted to be out, doing something, anything.”

Soon enough, commercial fishermen on the wharves noticed the kid with the fishing pole and hired him to do odd jobs: stack some lobster traps in this pickup or wash down the aft deck of that dragger. Before he knew it, he had learned how to mend nets and bait traps. That led to a part-time job as sternman on a lobsterboat. “I’d do anything to be on the water,” he said, which pretty much sums up his life to this day.

Harkins eventually earned his U.S. Coast Guard license to carry passengers, and became an excursion boat captain, still sailing out of the wharves of Portland and still hanging around commercial fishermen, ferry captains, excursion boat operators and a whole host of trades and businesses connected to the Maine coast, both in Portland and beyond. In today’s parlance, he was unconsciously “networking” for his future salvage/recycling business, acquiring contacts that are still helpful to him today. “You’ve got to have the contacts,” he said of the recycling business. 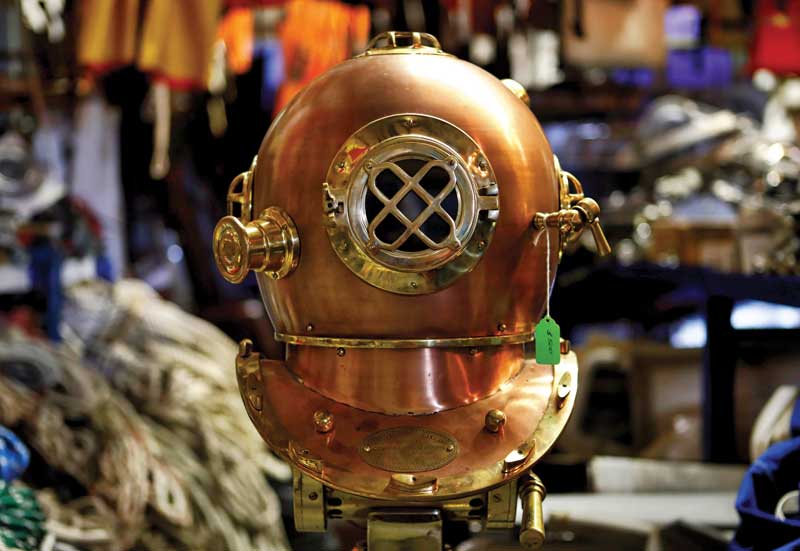 Harkins also acts as an intermediary in the sale of stand-alone nautical antiques, such as this dive helmet.

Without any advertising, Harkins’s marine salvage superstore—known officially as Captain Jim’s Marine Salvage and Nautical Antiquities—today draws a steady stream of customers every Saturday that it’s open. Most say they found the establishment via word of mouth; others track him down via his web site. The jam-packed warehouse that Harkins plans to double in size during 2018 holds both everyday boat items and high-end nautical antiques.

A sizable portion of his customers are not even boat owners. Harkins said interior decorators hired by architects, restaurants, and the like come to the store from well beyond Maine’s borders, usually to “re-purpose” nautical items for customers as far away as Florida and the Gulf Coast. “They’ll come in and buy something like a whole box full of cleats and use them as coat hooks in somebody’s new home near a beach or something like that,” Harkins said.

In addition to resalable hardware, Harkins has found markets for the hulls and other parts, as well.

He processes some 300 boats per year. Metal is removed and separated into bins marked for stainless steel, aluminum, iron, brass, lead, and the like. Those are set aside for delivery to whichever metals recycler is giving him the best price. Because the prices of used metals rise and fall on a month-to-month basis, Harkins cannot predict what portion of his revenue stream will be generated by used metals. Still, “everything helps,” he said with his characteristic optimism.

Indeed, one aspect of his recycling operation does more than just help. Fuels that have been left in abandoned boats can be cleaned up with special equipment that removes water, sludge, and other contaminants from diesel, gasoline, ethanol, and other carbon-based fuels. Harkins then uses these fuels to heat his warehouse and operate some of his machinery.

“Nothing goes to waste,” he said. 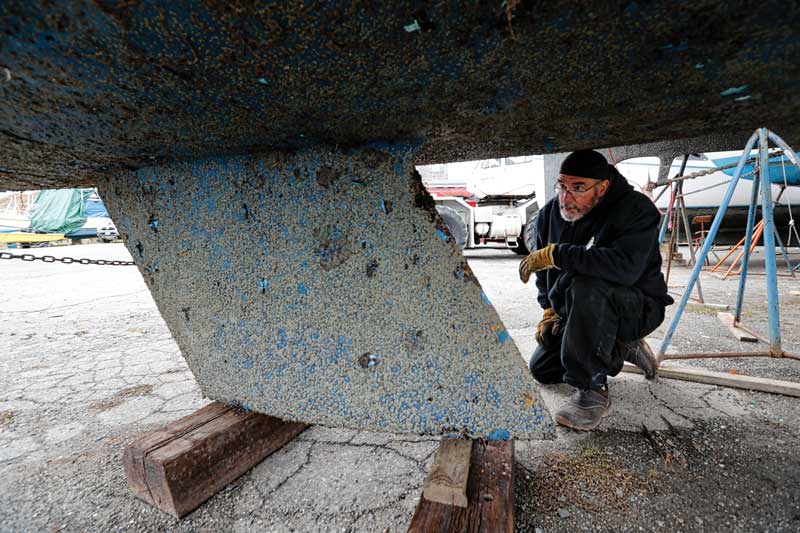 Wholesale scrap lead prices vary widely on either side of 50 cents per pound. But a boat with a ton of lead in its keel helps keep a boat recycling business solvent. Harkins often can just look at a boat’s keel and know what its lead content is worth.

Even fiberglass hulls can be recycled.

Using a diamond-tipped cutting blade, Harkins and his crew first separate the hull above the waterline from the hull below the waterline. The hull above the waterline is then crushed and ground up, to be added later to raw concrete—the addition increases the durability of most any concrete-based structure. Below the waterline, bottom paints stain the gelcoat, ruling out using the crushed fiberglass in concrete. Instead, the lower portion of the hulls are ground up and shipped to Canada where they are used as fuel for giant electricity-generating boilers. The extremely high temperature of the boiler’s firebox allows the recycled resin in the hulls to be burned cleanly, he explained. The hardened polyester resins in fiberglass boats are made from crude oil and therefore burn readily.

Not all reclaimed hulls are necessarily broken up and recycled. Some are saved for future owners.

One of Harkins’s other skills includes the operation of giant cranes. Before he went into boat recycling and after his stint as an excursion boat captain, Harkins ran the Portland-based Quality Crane Services. He sold the business but can still use the cranes when a storm like last October’s gale puts boats on the rocks.

“If they want to fix up their boat and the insurance will cover it, I can help them,” said Harkins, who plucked 12 boats from the rocks and beaches after last October’s storm. He also uses his 26-foot Cape Dory powerboat for more watery rescues and salvage jobs. 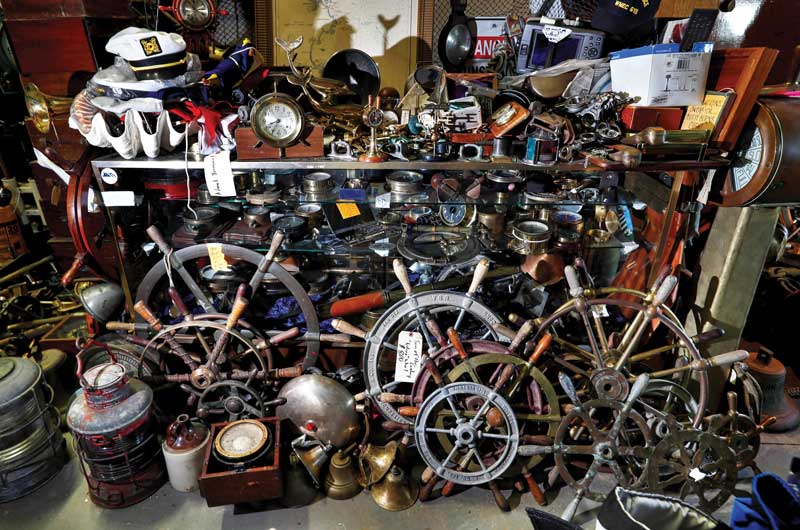 The array of reusable items at Jim Harkins’s nautical flea market is mind-boggling. One visit is rarely enough to take it all in and sometimes finding a specific item amid the piles of offerings is a challenge.

Still, Harkins steers clear of the actual rehabilitation of boats, whether old and neglected or just bashed up in some sort of mishap. He leaves that to others. For repairs or rehabilitation, Harkins can provide owners with a list of marinas that do quality work.

As hard-headed about boats as he can be, Harkins is a bit of a softy about hauling off someone’s lifetime of memories. Sometimes, he’ll bring a bottle of wine or even champagne to a distraught owner who is bidding farewell to a beloved boat.

“They know it’s time, it’s necessary. But it still isn’t easy,” he said, adding that he hopes his appreciative manners and generous gestures help ease owners’ sorrow. He reminds them that recycled boat parts can help rejuvenate someone else’s boat and their memories-to-be-born.

In the spring of a coming boating season, that thought can be reassuring to sailors who have let an old friend be trucked away.