I am a longtime subscriber who grew up on the waterfront of Salem, Massachusetts. I have never sent a letter to the editor before, but the negative comments about your March/April cover have stirred me up.

It is obvious that those readers are not in touch with the youth of today and are casting judgement on what is on the outside, not the inside. If they spent any time in boatyards, they would realize that there is “ink” all around them.

I have yet to put some art on this 66-year-old body, but it is on the bucket list.

Please keep up the good work. 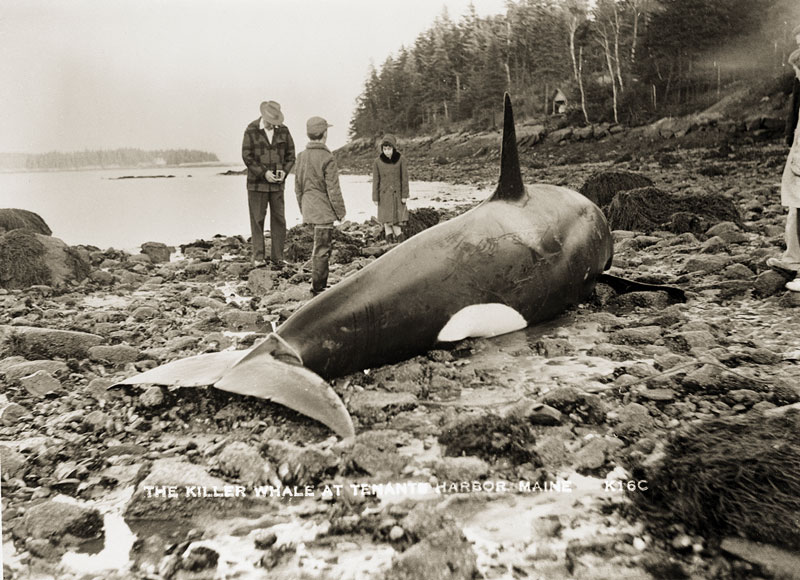 That’s Nadine on the right looking concerned for the whale.

I was quite surprised when a colleague pointed out to me in the March/April 2018 issue of your magazine that the article entitled “Killer Whale in Tenants Harbor” (on page 77) featured a photograph of me. Even though I am 71 now, I clearly remember that day, and yes, as an animal lover even then, I was indeed concerned for the whale.

Thank you for making my day! I much enjoyed going back through memory lane with that article.

What’s up with Frankenfish?

A few years back I wrote to MBH&H about your “Frankenfish” article: Atlantic salmon with Pacific salmon genes to be pen raised in costal Maine. I thought it was a bad idea at the time, and still do. Bad things happen.

A short while ago a bad thing happened when an Atlantic Salmon pen self destructed in Peugeot Sound, thus releasing non-native fishes into the environment. This was big news here in the Pacific northwest where salmon are iconic.

Now the State of Washington is passing a law that will phase out the business of pen raising Atlantic salmon in Washington waters. I praise this intelligent and controversial action on the part of the state.

I have not seen an update from Maine on the Frankenfish proposal.

I began perusing your July/August issue and was taken by the beauty of the photo, “The Maine I Love” on page 9. I have been cruising downeast for over 30 years and have experienced countless unforgettable “Maine Moments” over that time. Yet I know I have seen a mere fraction of all the beautiful places to be found on Maine’s 4,000-plus miles of coastline. I hope to be able to keep cruising for many more years and enjoy “The Maine We All (sic) Love.” I was disappointed, however, that with all the fantastic boatbuilders native to Maine, that Ms. Donovan chose to include a “Novi boat” in her photograph.

I’m sure I’m not the first to point out that that is no regular Stihl chainsaw pictured on page 62, July/August 2018. That is a Husqvarna!

I had to look up the spelling but was shocked that the magazine would make such a faux pas.

You are indeed correct and have proved yourself a “cut” above in the chainsaw world. That was a Husqvarna, and we should have known better, or at least worn magnifying glasses when writing the photo caption. You “saw” it, we didn’t.   —The editors

We spend a couple of weeks each year with friends at Ocean Point and subscribe to your publication.

Growing up I had an aunt, Lizzie, who had no children. She often would call a group of her nieces and nephews and ask us to come to her home on the lake over the weekend where we could cook hotdogs. Then on Friday she would call to say “something came up, come some other time.” In a few weeks she’d call again, saying, “come out on Saturday and we will go fishing.” Then sure enough, something would come up and she’d call to cancel. This became a pattern.

Fast forward—our uncle died and a cousin and I helped our aunt with finances and chores. After she died there were a few dollars left to us. I used mine to purchase an Ericson 27, which I named “Lizzie’s Promise”!

Fiddling while the world burns

In recent issues there have been advertisements for boats with multiple outboard motors and headlines calling for extreme speed. I see more and more of this in boating-related magazines. Why is there such a need for speed? Is the boating world oblivious to changes in the world’s climate? It must be that we boomers are getting too lazy or infirm to sail, row, and paddle and we have therefore altered our boat-buying habits. Still, why not buy reasonable powerboats if powerboats are the only option? I see more and more large boats of all kinds being built. Sooner or later this will have to stop. The world’s goods and resources are finite and we as a people seem hell bent on making sure we are the last few generations to be able to exploit them.