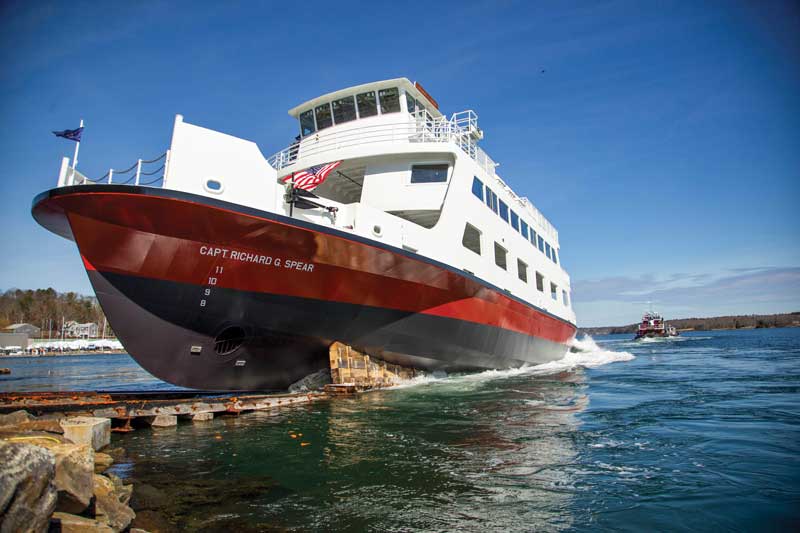 Richard G. Spear enjoyed a lifetime devoted to the sea. At 17 years of age, he signed on to the barkentine Capitana for a Harvard University-sponsored voyage retracing Christopher Columbus’ route to America. Spear even ended up on the cover of Life magazine in 1940 when the venerable publication featured the
Capitana’s travels.

Returning to Maine after the Columbus voyage, Spear completed high school, and then attended Maine Maritime Academy. After graduating with honors in 1943, he was commissioned in the U.S. Naval Reserve, serving with distinction aboard the Liberty Ship Henry Jocelyn during World War II in the Atlantic, Pacific, and Mediterranean war theaters. He joined the fledgling Maine State Ferry Service—with an unlimited Master’s license for ships of any size, any tonnage, and any ocean—as its first employee in 1959. Eventually named manager of the service, he held that position with pride for the next 30 years.

Spear retired in 1989, and in 2018, he crossed the bar at the age of 96—just as the Maine State Ferry Service Advisory Board voted to name a vessel in his honor. 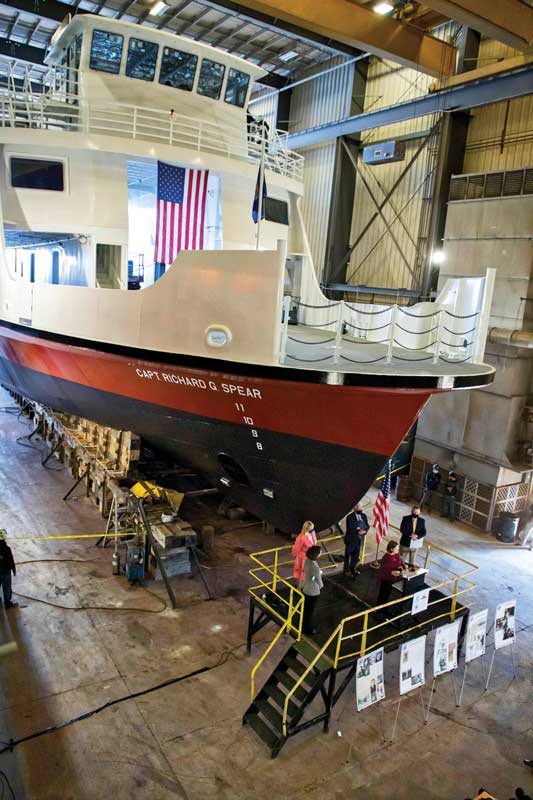 Maine Gov. Janet Mills, Washburn & Doughty CEO Katie Doughty Maddox, and Capt. Spear’s daughter, Linda Spear, were among the featured speakers at the April launch. Photo courtesy Maine Department of Transportation Fast-forward to April 9, 2021, and the Washburn & Doughty Shipyard in East Boothbay, Maine. It was a spectacular spring morning, crowned with a cloudless, robin’s-egg-blue sky. Dazzling sunlight danced off the calm of the Damariscotta River. The launch party guests sat in socially distanced chairs under the towering bow of the state’s newest ferry, resplendent in her ochre-red hull and gleaming white topsides. Speech-making out of the way, Linda Spear, the late captain’s daughter, gave a champagne bottle a mighty crack across the bow, and the Capt. Richard G. Spear… did nothing.

Minutes ticked by as launch crews scurried around the boat. The powerful tug Charles Winslow took up a strong pull on the bridled hawser made fast to the ferry’s transom. Two years in the making, it seemed the vessel wasn’t in any hurry to leave the construction building. An anxious fifteen minutes later, she finally began to slide backward on the greased ways toward the water, much to the relief of all and the sound of her horns and the applause of the guests. The Capt. Richard G. Spear kissed the waters of the Damariscotta River and began a career as the state’s newest ferry, the first ferry built in the State of Maine in 28 years.

Construction and fabrication on Capt. Spear’s namesake began at Washburn & Doughty in August of 2018. Due to Covid-19, the build spanned two years. The Spear replaced the Capt. Charles Philbrook, which the service elected to maintain as a back-up vessel. Design and build cost totaled $10.9
million and was paid for through Maine bond funding, local highway funds, and federal dollars. The service anticipates a 30-year service life for its ferries.

Designed by Braintree, Massachusetts-based Gilbert Associates, the vessel has an LOA of 154 feet and a beam of 38 feet. The 465-ton car ferry will carry 250 passengers and up to 23 cars and trucks with its three main-deck lanes. The  Capt. Richard G. Spear is powered by twin 750-hp Caterpillar C32 engines, while electrical power comes from a pair of 99-kW John Deere generators. The ferry is equipped with a 250-hp Schottel bow thruster powered by a dedicated John Deere genset. Servicing Vinalhaven from the Rockland terminal, the vessel makes the trip in 75 minutes.

Katie Doughty Maddox, president of Washburn & Doughty, spoke at the launching ceremony. “The importance of building Maine State Ferry Service vessels in the state, by Maine residents, should not be overlooked. Washburn & Doughty employs a team of 90 craftsmen who take enormous pride in the respective trades and have created a national reputation for first-class steel vessels. The fact that the state need look no farther than East Boothbay for new vessel construction is a boon to the state and to the livelihood of many Maine families.”

The Capt. Richard G. Spear will sail out of Rockland with a capacity of 225 passengers and 23 vehicles. Photo courtesy Maine Department of Transportation

Maddox noted that the two years it took to build the ferry were challenging due to the pandemic, and that she was particularly proud the Washburn & Doughty crew was able to complete the work under such challenging conditions.

Maine Governor Janet Mills also took the podium prior to the launch. “Maine ferries—along with fishing vessels, container ships, and other boats that make daily trips along our shores to feed our state, bring our goods to market, and transport residents and visitors alike—are an important part of our economy and an irreplaceable part of our history.”