Uncovering the ecological needs of a secretive wild cat 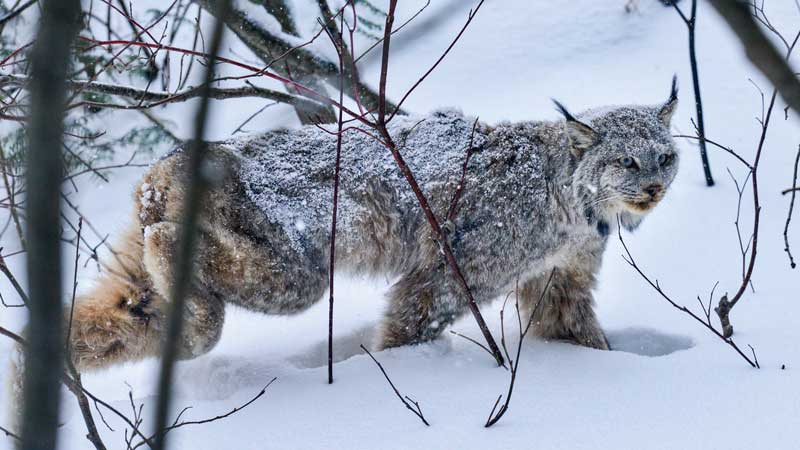 The magnificent hazel eyes of an adult female Canada lynx stared at me from behind the wire door of a box trap on a coniferous hillside near the fabled Allagash River. The trap, camouflaged by clipped balsam fir bows and snow, resembled a child’s snow cave. Capturing her on this late March day in 1999 was a moment fellow wildlife biologist Adam Vashon and I had anticipated for seven frigid, fruitless days in northern Maine.

L1, as she became known, was the first lynx captured at the outset of a 10-year federally funded project designed to understand the population size, range, and habitat requirements of a rarely seen denizen of the Maine woods. The research was prompted the previous year by a conservation group’s controversial petition to add lynx to the federal threatened and endangered species list. At a September 1998 public hearing in Old Town, Maine, the wood products industry, and Lee Perry, then commissioner of the Maine Department of Inland Fisheries and Wildlife, led the opposition to federal lynx protection. Perry, refuting the existence of lynx in Maine, remarked, “Canada lynx are from Canada, as their name implies.” 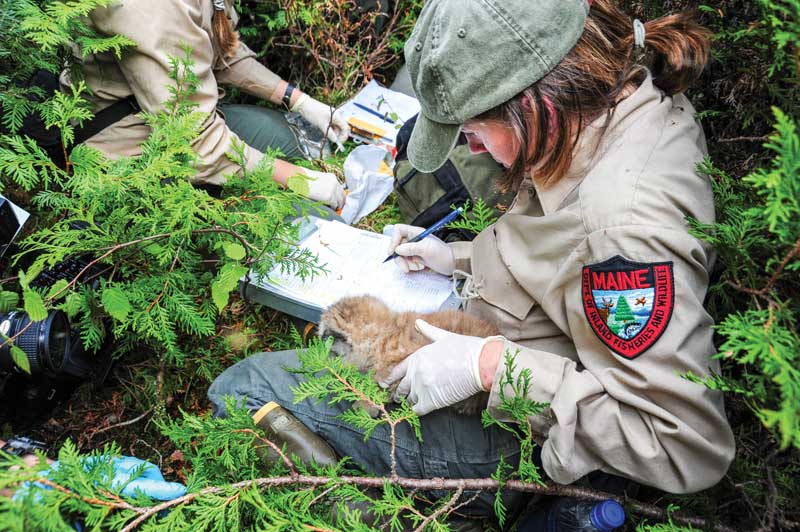 Jennifer Vashon, lynx study project leader, with a lynx kitten from a den in a cedar thicket.

In the live trap, L1 appeared nonplussed. Adam and I, though, were ecstatic. He radioed his wife, Jennifer Vashon, the Maine Department of Inland Fisheries and Wildlife’s lynx team leader. “Jen,” he said on a two-way radio, “we caught our first lynx.” Twenty minutes later, Jennifer and two others arrived by snowmobile. With backpacks overflowing with data sheets, measuring tapes, scales, cameras, sedatives, ear tags, and a GPS radio-collar, they snowshoed to meet us at the trap.

Whispering instructions to each other, Vashon and her crew measured a dosage of ketamine and xylazine and added it to a syringe attached to the end of an aluminum pole called a jab-stick. Shuffling on her knees, she weaved the pole through the trap’s wire mesh and jabbed it forward. On impact, the syringe’s plunger injected the sedative cocktail through a needle into the lynx’s left thigh.

Retreating, Vachon checked her watch; we waited in silence for two minutes. With L1 asleep, we gently dragged her out of the trap and onto a wool blanket. The team worked efficiently, attaching a GPS radio collar and a numbered ear tag, and recording her weight, height, and body length on a data sheet. A fur sample was stuffed in a Ziploc baggie. After examining the cat’s teeth, Vashon then elevated L1’s head onto my green wool pants. While waiting for L1 to awaken, I marveled at her physical beauty and remarkable adaptations to life in the boreal forest, the world’s largest terrestrial biome. Her furred feet, comically enormous relative to her body mass, were an adaption to walking in deep powdery snow. She weighed 19 pounds, but her thick, fluffy light gray winter coat, which trapped air to keep her warm, made her appear much larger. 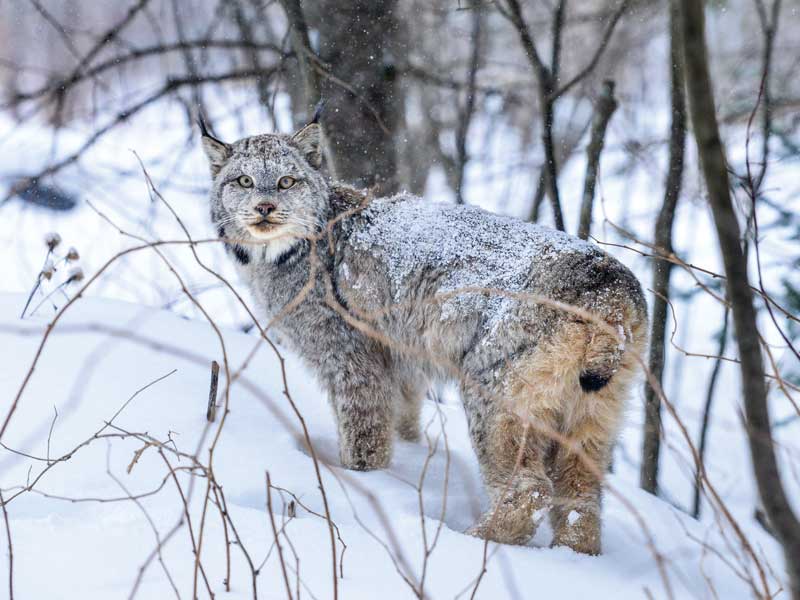 The heart of Maine’s lynx population is closely linked to boreal forests in northern-most counties.

Groggy at first, L1 stood, looked at us, waved one hind leg as if saying adios, then walked across three feet of snow and disappeared into the forest. We sat speechless for another minute. And then spontaneous high fives were exchanged. (Hours later, back at base camp, my flask of brandy made the rounds for a celebratory swig.)

Vashon set lynx live traps elsewhere in T12R12, an unorganized township spanning 36 square miles. Over the next 10 years, she moved operations to other northern Maine townships.

My week-long stay with the lynx field crew, though, was winding down. Around 10 p.m. on my last night with the crew, I stepped outside of our warm, cramped cabin for a breath of fresh air and one last view of the aurora borealis. For the heck of it, I activated the radio receiver attached to my waist, raised the antennae with my mittened hand, and turned 270 degrees. Surprisingly, I picked up L1’s radio signal’s faint beeps; she’d moved about 25 miles since her release several days earlier.

Surprisingly, the mother lode of historical Maine lynx records had come from outside the state: the Museum of Comparative Zoology at Harvard University’s collection includes 30 Maine lynx skulls and skins, furnished mostly in the late 1800s by Joshua G. Rich of Bethel. Rich, a remarkable naturalist who sensed his scientific contributions would be valued by history, kept meticulous notes and wrote many stories for Forest & Stream, the preeminent outdoor magazine in the 1800s.

On June 2, 1864, Rich’s published letter in the Oxford Democrat, “Fight with a Lynx,” described how he had captured the wildcat, tied its legs with handkerchiefs, and carried it alive nine miles to his home. His clothes were badly shredded by the lynx, and he sustained minor abrasions. Rich sold the female lynx (she had delivered four kittens in Rich’s barn, making apparent her sex) for $50 to Harvard University professor Louis Agassiz, who in turn shipped her to Paris. In 2000, the National Museum of Natural History in Paris confirmed Rich’s story by noting that on June 10, 1865, the museum had received a live Maine lynx from Professor Agassiz.

Of the many colorful anecdotes, one stands out. Retired Maine game warden Charlie Marshall told me that while stationed in Fort Kent in the 1960s, he received an unusual phone call. “One summer day the town drunk phoned and asked me if there had been a circus in town,” Marshall recounted. “I replied no, there hadn’t been a circus in town.” ‘Are you sure?’ he asked in a slurred voice, ‘Because there’s a kangaroo sitting on the bank under the Fish River Bridge.’” Marshall raced to the bridge, where he met the man. “We peered over the railing,” he said, “and I’ll be doggone if there wasn’t a reddish-brown animal sitting on the bank. It was a lynx. But with its long hind legs, large feet, and big ears, I understood how that fellow thought he saw a kangaroo.”

In July of 2012, Vashon completed Maine’s Canada Lynx Assessment, a masterpiece report summarizing the results of her team’s 10-year study. Her research proved that the lynx’s range overlaps the range of spruce-fir-hardwood forests of northern Maine. On March 24, 2000, the contiguous U.S. population of lynx was designated a federally threatened species. More importantly, the report showed that within this ecosystem lynxes are especially attracted to dense stands of regenerating saplings approximately 10 to 30 years after largescale forest clear-cuts, fires, and spruce budworm epidemics. And that’s due, the report states, to the high number of snowshoe hares—the favorite prey of lynxes—that feed and shelter in thick, young mixed forests. By 2006, when Maine’s regenerating forests covered 1.4 million acres, snowshoe hare populations had spiked, causing lynx populations to increase to an estimated 750 to 1,000 adults—a modern era high.

Of the 85 Canada lynxes that were live trapped and radio collared from 1999 until 2009, I was most keenly interested in reading about L1. From that day in 1999, when I had cradled her sleeping body, until her death on January 24, 2003, the research team monitored her movements, first with a radio receiver attached to retired Maine game warden Jack McPhee’s Cessna, and then, more precisely, with handheld ground antennas. We know from telemetry that she shared a home range with L2 for several years. He was probably her mate, but he might have also been her sibling. She raised, at a minimum, eight kittens at four den sites.

Shortly after death, L1’s radio collar and carcass were retrieved. One of her teeth was sent to Matson labs and examined under a microscope. From this tooth, scientists concluded she had lived 7 years and 8 months. L2, who was captured the same day as L1, died of starvation on April 23, 2005. Tooth analysis indicated that he’d lived 10 years. (Necropsy also revealed that his lungs were so full of lungworms he could barely breathe, let alone chase a hare.)

One of L1’s offspring, a juvenile male, embarked on a Forrest Gump-like walkabout. He left his home territory west of the Allagash, ventured briefly into Quebec, then pulled a U turn and walked to Monroe. Catching a whiff of Belfast, he turned tail and made tracks back to the Allagash Region, where he finally settled down and mated. During his three-month odyssey, he’d logged at least 500 miles and likely swam across numerous bodies of water (lynx are very good swimmers). 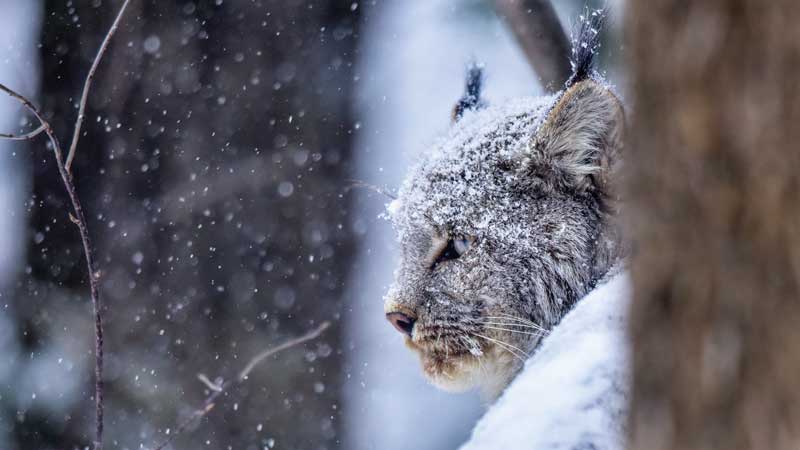 Lynx are patient hunters of hares, squirrels, and an occasional deer. They rely on stealth and ambush to secure meals.

Vashon’s research also revealed that a half a dozen or so collared cats had moved north to Quebec, some reaching the Gaspé Peninsula. At least one research lynx found a home deep in New Brunswick. Canadian wildlife biologists strongly suspect that an unknown number of Canadian-born lynx now inhabit Maine. In essence, Canadian and Maine lynx are members of a metapopulation.

Maine has likely been home to lynx since the last remnants of glacial ice melted about 11,000 years ago. The species is a survivor, but climate change poses the most serious threat to Maine’s federally threatened lynx population. By 2100, unless rising carbon dioxide levels are drastically lowered, the state’s spruce-fir forests will die out, along with our lynx populations. Furthermore, warmer, wetter Maine winters are changing the snow composition from powder to thick crust. Lynxes require deep, powdery snow (with a minimum 106-inch annual snowfall) to maintain a competitive advantage over bobcats and, especially, fishers, their primary predator. (Of the 18 research lynx that died of predation, 14 had been killed by a fisher.)

Some Mainers welcome easier winters in the decades ahead, but for the lynx, they will mean an end to the Maine woods they call home.