Photographs From Maine’s Past | Way Back When 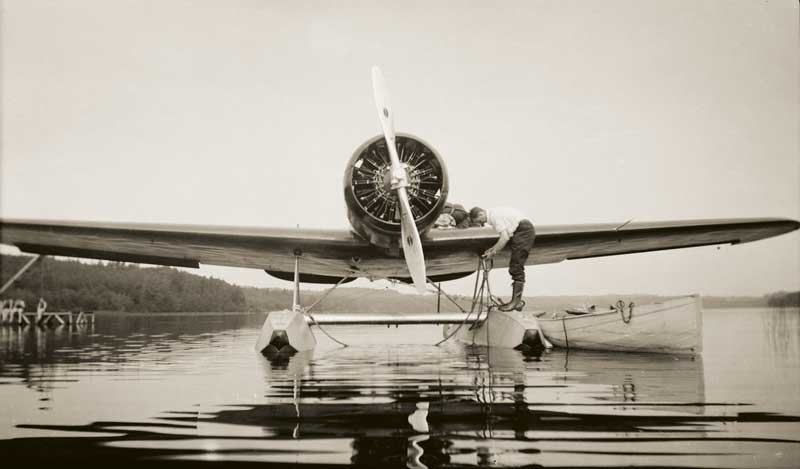 In 1933, aviator Charles Lindbergh and his wife, Anne Morrow Lindbergh, embarked on a 30,000-mile trip from New York, to Newfoundland, then Europe via Labrador, Greenland, and Iceland, down the coast of Africa, and back across the Atlantic to South America. The purpose of the trip was to survey possible air routes for Pan-American Airways.

On their way up the East Coast, the couple stopped to visit Anne’s family at their summer home on the island of North Haven in Penobscot Bay. That stop has been well-documented. Less well-known is that the couple didn’t make it to North Haven on their first try. They were stymied by fog and forced to land their Lockheed model 8 Sirius float plane on July 9, 1933 on South Pond in Warren, Maine.

While the national news media frantically tried to figure out where the famous couple had gone, the local Courier Gazette newspaper had the story. The Lindberghs came ashore at the Sandy Shores home of a man named Clarence Dorman, who brought the couple to meet his wife. “I think these are the Lindberghs,” said Dorman as he introduced the pair. “I guess you’re about right,” replied Lindbergh, according to the newspaper account. The Lindberghs needed to make a telephone call but the neighbor’s phone was not working so they used the telephone at Spear’s Garage owned by Alvah Spear to phone New York and order new parts for the airplane. According to the news account, Lindbergh made some repairs to the plane and the couple spent the night with the Dormans. After a “tempting breakfast” served by Mrs. Dorman the next morning, they left for North Haven. At some point, according to the Gazette account, the plane became stuck in the muddy lake bottom and Clarence Dorman donned “long-legged rubber boots” to help push the pontoons free.

This photo, from the collection of the Warren Historical Society, shows Lindbergh working on the plane while it floats in South Pond. To learn more about float plane history in Maine visit the newest exhibition at Owls Head Transportation Museum entitled “Vacationland”.