Illustration by Sam Manning.
Hardships can bring out new and previously unimagined beauty. I think these difficult times have helped me understand better than before how infinitely rich and beautiful life is in every way and that so many things that one goes around worrying about are of no importance whatsoever.
—Karen Blixen, pen name “Isak Dinesen,” author of Out of Africa
Dear Friends: Last year’s winter was a long one, with more than ample amounts of both cold and snow. Then came a spring during which we saw an unusually heavy bloom on apples and rich, yellow pollen from the white pines lying thickly on every surface. Later we saw a rich bloom on the lupine, and the blue-eyed grass was beginning to open in the fields, showing more than the usual number of tiny pale-blue blossoms on each plant: so also were the ox-eye daisies. Our garden perennials, including iris, peonies, rugosa roses, and echinacea, were lush and thick and loaded with buds. All this pointed to a glorious season of floral profusion ahead. Sure, it’s easy to forget over a long, hard winter just how lush spring can actually be. And, yes, our memory does tend to fade over the years. But, if you are skeptical about this flowery explosion, here are some hard facts: A favorite apple tree at the church which has never had more than a handful of blossoms in any of the past ten years was bedecked in hundreds of fragrant flowers. Our giant California poppy that averages maybe five flowers most years had almost 20 buds. The giant and (frankly) garish purple iris that averages maybe half a dozen flowers most years had close to 50 buds. It went on and on. What happened here? Perhaps it was because we had an extra warm, wet summer the previous year. Perhaps this abundance was because the heavy snows of the previous two winters kept the ground from freezing and minimized winter damage. Or perhaps it was something more. Wild speculation Perhaps there is a law of Nature at work here: that hardships can bring out new and previously unimagined beauty. A forest fire can destroy a forest only to have it come back again richer and greener than before. The sufferings in the lives of a Jesus or Gandhi or Helen Keller or so many others produced incredibly beautiful souls. The periods sometimes called “Dark Ages” in Europe—times of very little art, literature, and philosophy around 1200 to 800 BC and again around 500 to 1200 AD—led in turn to an unprecedented flowering of culture and religion. The Black Plague, which horribly decimated the population of Europe, is widely seen today as the precursor of the glories of the Renaissance. The struggles of two world wars and the Great Depression brought our country from being just another nation among many to being the most culturally innovative and powerful nation the world has yet seen. The questions for us today are: Will the winter of our nation’s present hardships lead in the fullness of time to a new season of the flowering of our ideals and democratic values? That will be up to us. Will our own hardships produce new beauty? In the presence of patience and hope they can, absolutely; if we will keep faith with the flowers. 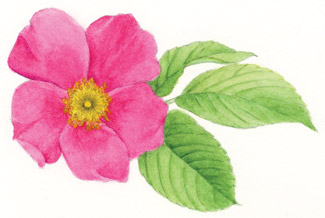 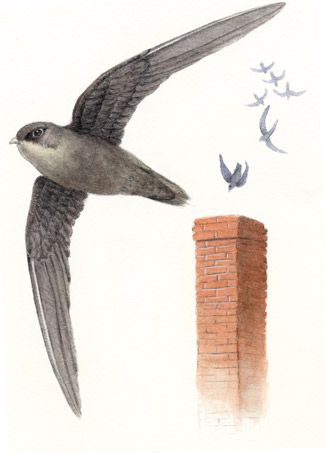 More Natural Events Around late July we begin to notice the short, crescent shapes of chimney swifts twittering and darting around in great loops that slice the evening sky like little scimitars. Sooner or later if you watch long enough—and if there is another house near enough by—you will see a swift fly through a high arc and then straight down into the dark maw of a neighbor’s chimney at full speed. It is a marvel that they aren’t dashed to bits on the hearth. But somehow they halt their plunge and catch up on the inside of the chimney and there build their nests during the season of the year when it is least likely that the chimney will be smoky and hot. Other birds nest and may raise their young in the spring, but not the chimney swifts. One day when I was younger and even more foolish, with no instruction whatsoever and the youthful conviction that if I didn’t know everything already I soon would, I determined to start myself out in the chimney-sweeping business. I had heard that the old-timers would tie a rope around the legs of a goose and force it flapping and honking down the chimney. Being too tender-hearted to treat a goose this way, I gathered some steel strapping and tubing from the dump, bought some threaded rod at the hardware store, and soon constructed crude chimney brushes in three sizes. Thinking that mid-summer would be a good time to start cleaning chimneys for the same reason that the swifts choose mid-summer to live in them—though I did not yet know why—I climbed onto the roof of the colonial farmhouse in West Concord, Massachusetts, of which we were caretakers, and lowered one of my steel brushes down the chimney. As it descended, I could hear an avalanche of matter showering down into the huge fireplace below while a cloud of dust and soot rose from the chimney, filling my nose, blackening my face, and floating into the blue summer sky. After several passes with the brush, I came proudly down off the roof and strode into the house to clean the debris out of the ancient fireplace. On the hearth I found a pile of brick-red dust, gray ash, and shiny black creosote. Under this heap I saw a faint movement. Reaching into the mess I uncovered a small chimney swift nest. It was like a half moon, flat on one side where it had been affixed to the inside of the chimney. It was carefully fashioned of tiny twigs glued together with a sort of shiny wax, and in its half-pocket were two naked, blind, squirming hatchlings about the size of the last joint of my finger. My heart broke at what I had done. Trying to be harmless, I had done great harm. Trying to be kind, I had been cruel. I knew that these tiny helpless swifts were doomed and that the twittering cries of their bereft parents, who had wisely obeyed the ways of the ages, were soon to be echoing down the empty chimney. Not wanting to delay the hatchlings’ end, I drowned them in a bucket of water. I never again swept a chimney in mid-summer. Thirty-some years later, I still shudder at how an ignorant and innocent man’s plans can crush the primal generative wisdom of a tiny creature. I know even less now than I did then. I only hope I am a little less foolish, too. A final seedpod to carry around with you From Henry Williamson, English novelist and naturalist: “The swift is the mystic among birds. He is aloof from other birds—apart from life. He is never seen to perch… I have heard and seen them long after midnight, whole cohorts of them wheeling in the sky, their cries sounding like the thin jingle of a frail chain.” That’s the almanack for this time. But don’t take it from us—we’re no experts. Go out and see for yourself.
Yr. mst. hmble & obd’nt servant,
Rob McCall