No lakeside home or camp would be complete without a pair of watercraft, one for paddling and one for sailing. My choices would be: a 14-foot Vermont Fishing Dory from Adirondack Guideboat for still water, and the DaySailer 17 from Cape Cod Shipbuilding for afternoons when the breeze kicks up. 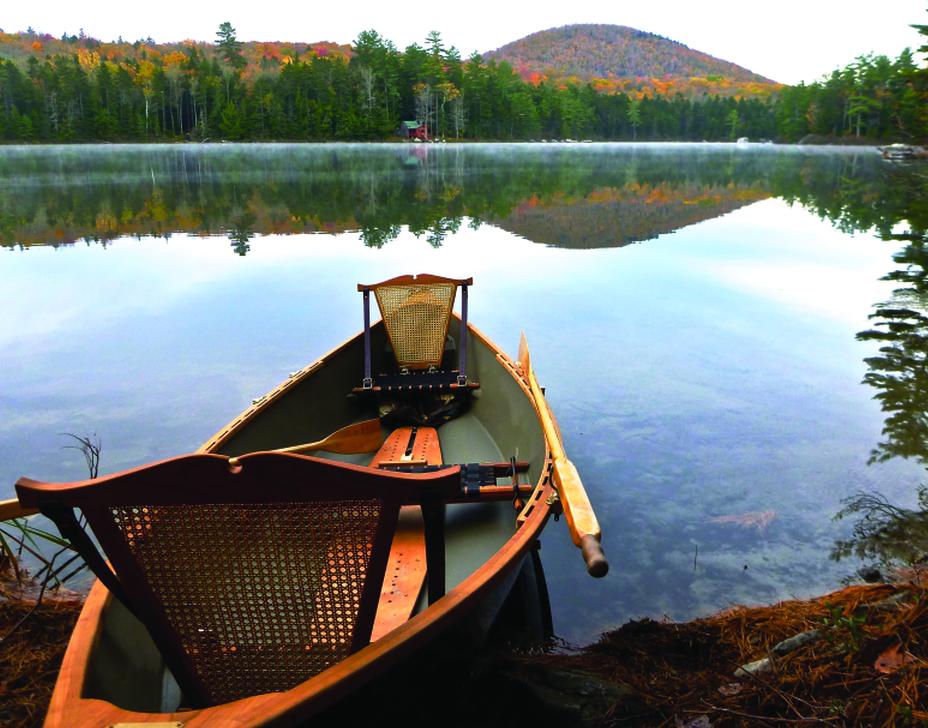 The Vermont Fishing Dory is built from modern lightweight materials with elegant touches such as woodwork and caned seats that give it a traditional look. Courtesy Adirondack Guideboat The Vermont Fishing Dory is a terrific design and an ideal rowboat. Rowboats share something with road bicycles: the lighter the better. Lightness not only makes the combined human-and-machine move along with less resistance, it also means that every pull of the arms creates the greatest momentary acceleration. Even if the boat moves in a jerky manner, muscles suffer less fatigue when the conveyance has minimal weight and therefore inertia. The 14-foot Vermont Fishing Dory is the lightest, truly stable rowing boat you can buy of its size. This is due in part to its bloodline.

Adirondack Guideboat in Vermont was started in 1979 by Steve Kaulback, who was joined in 1996 by David Rosen. Back in the 1800s, Adirondack guideboats were designed to be easily rowed, lakeworthy, carried over long portages, and capacious enough for two lucky “sports” and one unlucky deer. 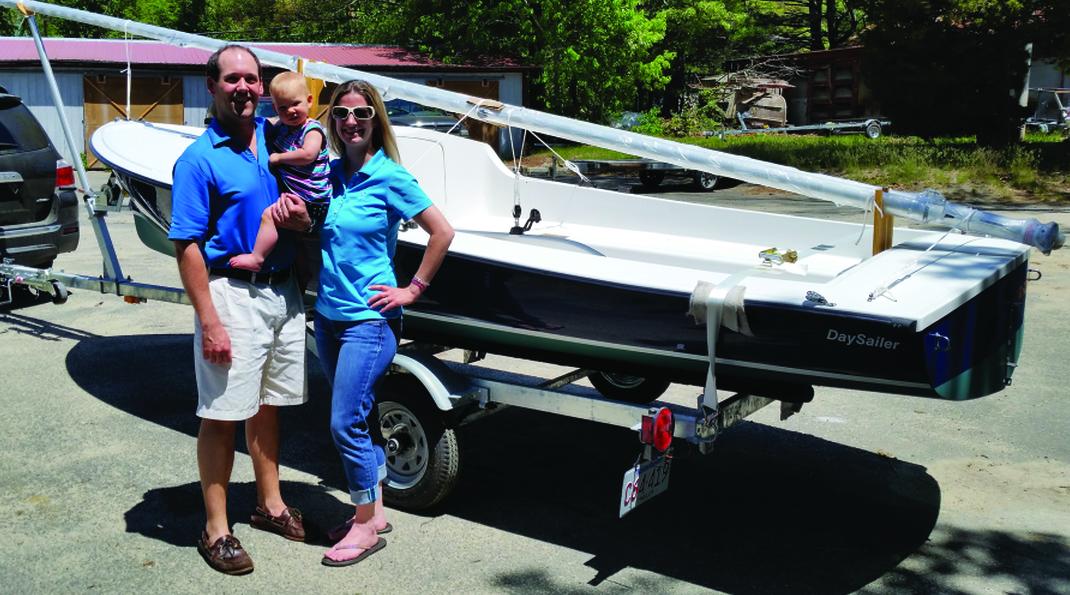 The non-racing version of Cape Cod Shipbuilding’s DaySailer 17 has a hinged mast and is easy to get on and off a trailer, making it a great family sailboat. Photo by Wendy Goodwin Kaulback and Rosen began building wooden versions of this traditional “corrected canoe”—so-called because these boats appear to be commodious canoes but can be rowed with conventional oars, which makes them faster. Soon the company introduced a low-maintenance and durable fiberglass version, and then introduced Kevlar to the equation.

Brothers Justin and Ian Martin came to work for the company in 2001 when they were still teenagers and quickly worked their way up the ladder, becoming experts in the composites phase of production. In 2012, they made a deal to buy the company. By that time, Justin and Ian had worked in every part of the shop, from lamination to woodwork to installing cane in seat backs. Beyond that they had taken on responsibility for workflow planning, accounting, demonstrating the boats, arranging for exhibits, and selling at shows. They simply loved every aspect of the business.

Sales of the classic 15-foot Guideboat have never flagged. At one point lifestyle guru Martha Stewart ordered one of the company’s rare, wooden models and duly promoted it on both a TV program and video, according to the company. The publisher of this magazine, John Hanson, acquired a Kevlar Guideboat a couple of years back and rows it happily on Megunticook Lake.

But the Guideboat, while famous for its seaworthiness, grace, and speed, requires the person rowing to sit low in the boat with their legs nearly straight out. It can also be tippy. 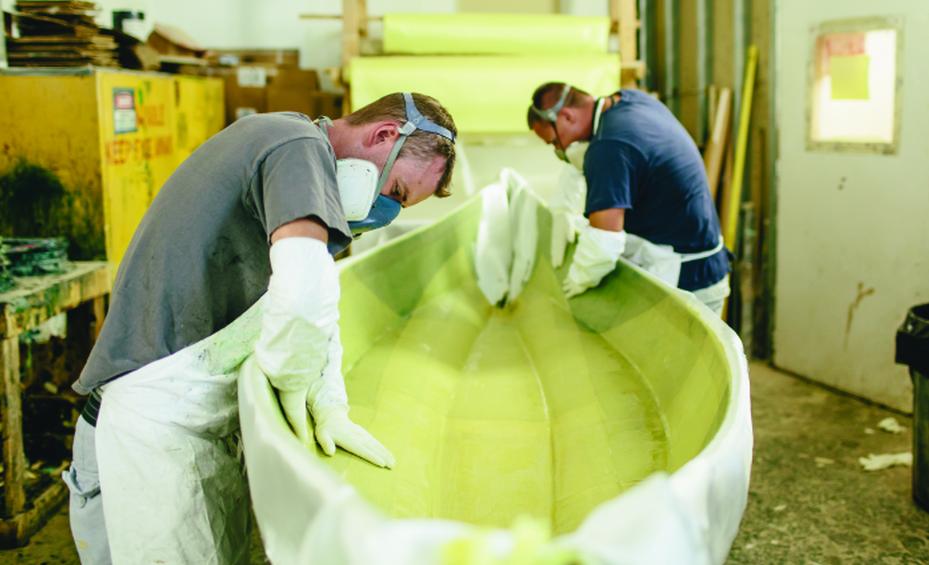 The skin of the Vermont Dory includes layers of Kevlar and fiberglass, which make it strong and light. Photo courtesy Adirondack Guideboat The Fishing Dory shares the same good looks, the high-peaked double ends, and Kevlar construction. However, the dory is more stable, due in part to hard chines on the bottom. There are even photographs in the sales brochure of people standing up in the boat—not that I’d recommend doing such a thing. Also, the seat is higher and a bit more comfortable. All these features have combined to make it the company’s best-selling model.

The skin is a mix of fiberglass and two layers of Kevlar reinforcing cloth. In order to eliminate the extra weight of gelcoat, which would surely account for an extra five or 10 pounds, workers press a layer of colored laminating resin through the outside weave of fiberglass cloth.

There isn’t any “bare-bones” model for the Vermont Fishing Dory.  These boats have pretty woodwork, caned seats, and real wooden breasthooks, inwales and outwales. If a dory can be a yacht, then this one is.

Although not a hard and fast rule, what distinguishes lakes from ponds in our neck of the woods is depth. No matter how broad a Maine body of water, if it’s shallow then it will be called a pond. If it is so deep that the sun doesn’t support vegetation at the bottom, then that’s a lake. Maine has more ponds than lakes, all of them shallow. Rocks are a common feature, near shore as well as in less predictable spots. Often the rock piles are marked by buoys, privately placed after ice-out. These are decidedly not government buoys, mind you, like the familiar cans or nuns, instead just thin little stakes not easily discerned in the glare of the afternoon sun.

A centerboard or swing-keel sailboat is a much better option for navigating through these shoals and shallow spots than a pure keelboat. There are many designs that meet this criteria—I’ve owned a Flying Dutchman Junior (13'3" long), a Blue Jay (13'6"), and a Lark (14'). But the performance of each of these maxes out at three persons aboard. I’ve noticed that “camp” ownership can be social. Crowds can arrive on short notice, especially on hot days when clear fresh water calls like a siren. This calls for a family-friendly boat.

The DaySailer 17 was one of the most popular family sailboats of the postwar era. While other classes have died out, the DaySailer is still being built and going strong because it is so good—over 13,000 have been built, if you include all the variations. It is small enough to singlehand in light air, but big enough for a family of two adults and three children. The boats can plane and are easily righted and bailed if they capsize.

The design resulted from a collaboration between England’s famous sailing Olympian Uffa Fox and America’s equally famous George O’Day. Fox reigned supreme over the International Fourteen dinghy class and designed most of the best of them. O’day was more of a keelboat sailor, but of greater pertinence, he owned one of the early American fiberglass boatbuilding companies. He wanted to create and sell the ideal family sailboat. Fox made easy work of scaling up his successful formula for a planing dinghy. O’day’s job was to render it family-friendly, and he did so by designing semi-comfortable cockpit seats, a side deck and low coamings to keep the boat from shipping water, and an attractive cuddy cabin. This right-sized configuration was unique for its era, and being fiberglass, was way ahead of its time. The DaySailer 17 was an instant success, and has been built by various outfits from the early 1960s up to the present day.

The DaySailer 17 class has active racing fleets around the country. Shown here are racers competing in a 2014 regatta. Photo by Deb Mason-McCaffrey

Today’s brand-new DaySailer varies only slightly from the original. One key change has been reworking the hatchway into the cabin. In the beginning this was wide-open, and as a result a simple knockdown could easily swamp the boat. The new Cape Cod version has a smaller tight-fitting hatch to keep water from getting down below.

Wendy Goodwin, the sales captain for Cape Cod Shipbuilding, said the model has been popular.

“What makes the DaySailer ideal for lake sailing is the ease with which families can launch, rig, un-rig and haul at a ramp for the summer or just the week’s vacation,” she said. “They don’t require much maintenance and the time to rig is literally minutes as the mast has a hinge. The boat is mostly fiberglass with accents of teak trim so the yearly maintenance is minimal.”

Could you imagine anything better than having a small house right on the shore of a Maine pond or lake, with a DaySailer 17 at rest on a small sandy beach, right alongside your Vermont Fishing Dory for early morning workouts?