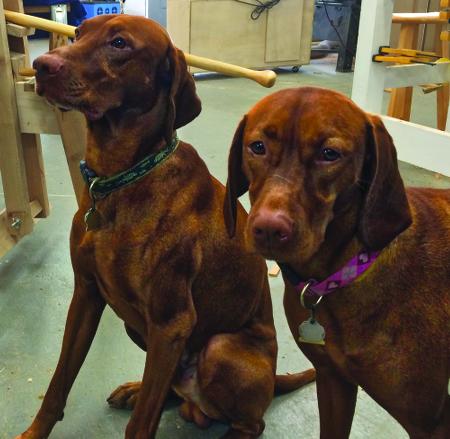 Photo courtesy Bob White Otis and Lucy are shop dogs in winter, where they diligently help their owner Bob White build cedar and canvas canoes and furniture in Rockport under the name White Woodcraft. During the summer, the two Hungarian vizslas serve as crew aboard Preamble, White’s Island Packet 37, which sails out of Rockport Harbor. White describes his business as a “one-man, two-dog operation,” but Otis, 5, and Lucy, 2, don’t really do much to help, he said. “Mostly they sleep, although Lucy does occasionally gnaw on a scrap of wood.” 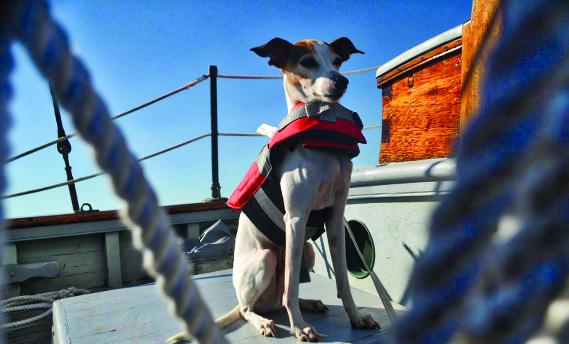 Photo courtesy Rachael Wyman Pasha, a 7-year-old Italian greyhound, splits his time between a boathouse on the New Meadows River and the Jenny Ives, a 37-foot wooden gaff ketch built by Roy Blaney in Boothbay Harbor. Pasha has cruised the coast from Portland to Bar Harbor with his people, Rachael, a potter, and Colby, a boatbuilder. His adventures along the way have included crashing a lobster bake at the WoodenBoat School and summoning seals to the dory while rowing in Port Clyde. When his people sailed the Jenny Ives to the Bahamas last winter, Pasha had to stay behind but he will be aboard for this year’s cruise. For more about Rachael and Colby’s waterborne travels, go to www.boatfarmstudio.com.

Has your dog been profiled in this column? We are working on an anthology of past  Boatyard Dog® write-ups. Email editor@maineboats.com or call 207-594-8622 to learn more.

Winter Days in the Maine Woods