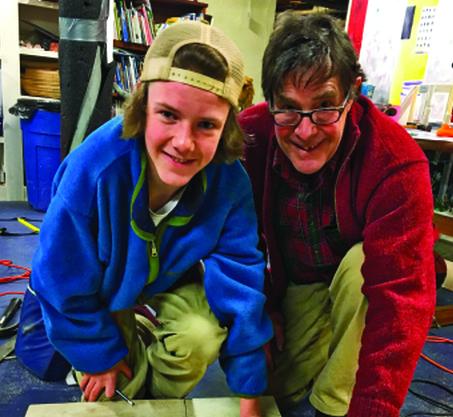 Thank goodness professional boatbuilders are better than me at keeping to a schedule. In this issue we look at some of the extraordinary boats launched in Maine during the past year. Ranging from elegant motoryacht refits to around-the-world racers and a funky houseboat, this issue showcases the can-do attitude of the Maine boatbuilding industry. Not in this issue: a story about the New Zealand scow Moth that my son and I started last winter (and I wrote about in Issue #139).

When we began last year we worried the boat might get stuck in the basement. It didn’t, but maybe it should have. The basement was a great place to work, clean, well-lit, and close to the kitchen. We laid out the plans there and built the backbone, or CVK, as our consultant Art Paine called it—CVK is shorthand for central vertical keel. We built a jig out of nice straight fir and set the backbone in place. This Moth is designed like an airplane wing, bulkheads fastened to the CVK with longitudinal stringers covered by thin plywood planking.

When we realized the fit between our boat and door to the outside was going to be really tight, we decided to build a mock-up out of lauan plywood as a test. After taking a break during Sam’s basketball season, we finished the mock-up and on a fine early spring day, with help from a neighbor, we muscled the 11' x 4' x 1' box toward the outside. Halfway through we got stuck. The only way we could get the mockup out was with twisting and wiggling. But a fully glued up Moth gets its strength from being a stiff one-piece structure that does not twist and bend.

Plan B was to build the boat in my less well-lit, less clean shop. We brought the building jig out there, refaired the CVK and got back to work, hoping to be done by summer. We were racing against time, though, and we lost. Baseball season, the water, and already completed boats lured us away with summer’s siren call.

But now it’s winter again and we are back at work. Last weekend we built a plastic cocoon in my shop enclosing the boat project and my big woodstove. The tools have been gathered, the iPhones have been left at the door, and the lights are on. Let the boatbuilding begin. —JKH