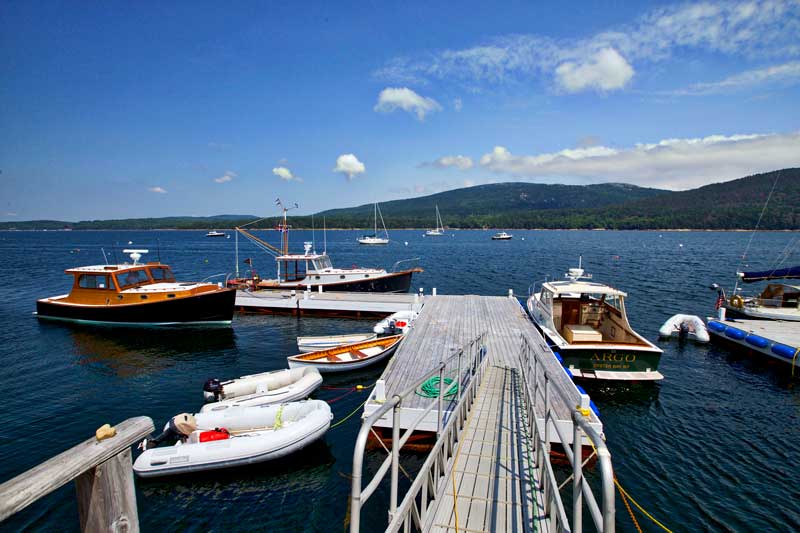 The John Williams Boat Company is located on Somes Sound. The yard’s focus is storage and service, including refits, restoration, maintenance, repairs, and systems work for both wooden and fiberglass boats. Photo by Alison Langley

John “Jock” Williams was working at the Hinckley Company in 1971 when he met self-taught boatbuilder and designer Lyford Stanley, and the two talked about making a fiberglass version of Stanley’s 36' lobsterboat. Within the next two years, the pair had made a mold and built their first boat. One thing led to another, including the John Williams Boat Company, which has been building and caring for commercial and recreational boats from its spot on Somes Sound in the town of Hall Quarry on Mt. Desert Island since 1975.

The Stanley 36 Gambol, which was built in the 1980s, was one of the first Stanleys built as a pleasure boat. The previous ones had been used for lobstering. Williams modified the lines to raise the sheer. Photo courtesy John Williams Company

Inspired by the idea of recreating classic downeast designs in fiberglass combined with finely wrought wood finishes, Williams and Stanley had a hit early on with the Stanley 36. The relationship continued over the next four decades. Stanley, a fisherman and self-taught boatbuilder and designer, drew up plans for powerboats ranging from 28 to 44 feet in length. Williams built them.

Over the years, Williams and his team built more than 200 boats; more than half are the flagship 36s. “I’m very proud of these boats,” Williams said. “We’ve built solid, good, honest boats that are rugged and properly built.” 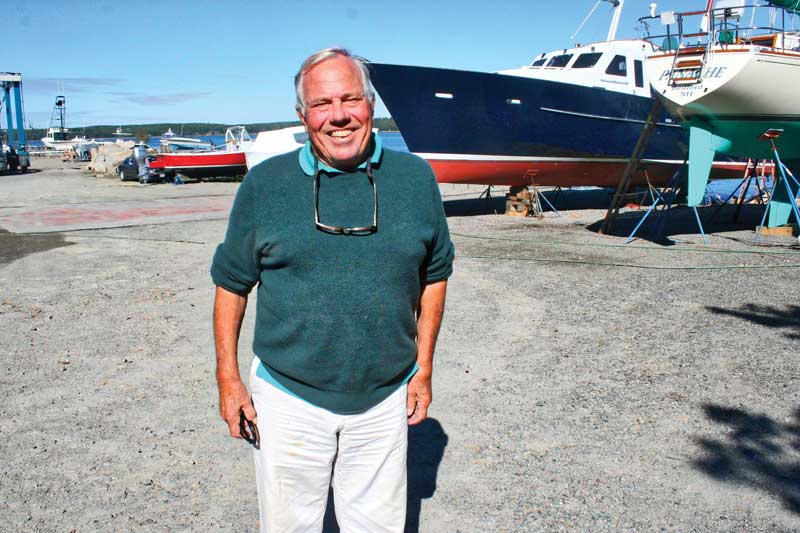 John “Jock” Williams, who grew up on Martha’s Vineyard, has been around boats all his life. He learned wooden boatbuilding in Denmark, before moving to Maine to work for the Hinckley Company in the late 1960s. He struck out on his own soon afterward. In recent years he has stepped back from the business, letting a younger crew take over. Photo by Laurie Schreiber

Williams’s mantra has long been “No corporate culture, no dealer incentives, no focus groups. Just boats.” He’s all about relationships. That starts with close attention to his customers and the customized features that follow, like extra headroom for a particularly tall gent and a sewing machine station for a yachting seamstress. His customers often become friends.

His approach is based on a mutual appreciation of boats. As a teenager growing up on Martha’s Vineyard, Williams worked summers in a marine store, running a fuel dock, operating a launch service, and learning to be a rigger. At 15, he bought his first sailboat and soon took up racing, eventually competing in the Bermuda Race, two transatlantic races, the TransPac, and almost every major ocean race in the Northeast.

During the Vietnam War, Williams served on a U.S. Navy Geodetic Survey ship charting the South China Sea, then at the U.S. Naval Academy Sailing Office in Annapolis. Discharged in 1967, he moved to Denmark to apprentice in wooden boatbuilding at Paul Molich’s shipyard in Hundested. Upon returning to the United States, he joined the Hinckley Company in Southwest Harbor as fiberglass production manager.

Back then, Stanley was an accomplished builder of wooden boats with a shop in the Mt. Desert Island village of Bass Harbor. He had no interest in fiberglass. But, Williams recalled, Stanley realized more fishermen were buying fiberglass boats.

As it happened, Stanley’s wife, Norma, worked with Williams in Hinckley’s fiberglass department. At Norma’s urging, the two men joined forces. Williams set up his first shop in Manset, but soon moved to an old granite quarry building on the shore of Somes Sound where the yard remains today. He was impressed with Stanley’s innate sense for shape, proportion, and performance characteristics; and he was eager to collaborate. The yard quickly had orders from local fishermen, then from recreational boaters. Both markets appreciated the design of the 36 and subsequent models for their stable platforms, easy handling, and comfortable midship sections. Rich woodwork offered an elegance rooted in yachting’s golden age.

The designs produced by Stanley, who died in 2007, have remained popular. Additional interesting projects in recent years include construction of a Douglas Zurn-designed Williams 38 model that’s a modern take on the popular Stanley 38. It features a classic downeast superstructure, a fast V underbody, and a high-performance power package.

Today, the yard focuses on service and storage, which has grown considerably in the past two years since other local yards have closed or downsized. Notably, Williams absorbed much of the local International One Design fleet, along with other classic wooden boats, when nearby Mt. Desert Yacht Yard scaled back. The team handles repairs, retrofits, restoration, maintenance, and systems work for wood, cold-molded, and fiberglass construction. The yard had 175 boats in its care this winter.

Infrastructure includes a 50-ton Travelift, a 14-ton hydraulic crane with 60-foot boom, and a 12,000-pound forklift, plus waterfront facilities and a mobile marine service during the boating season. 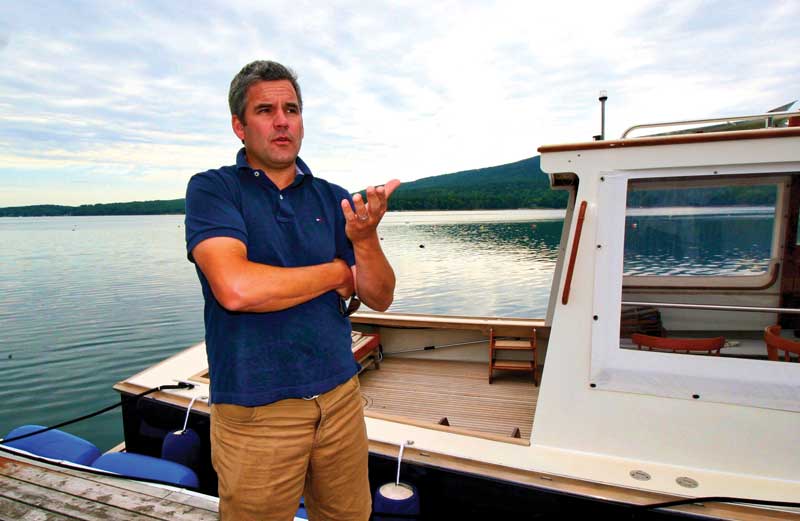 Today, at age 80, Williams has edged back from the business, leaving General Manager Jaime Weir, Operations Manager Lyndsy Clough, and Service Manager Will Ratcliff to run day-to-day operations. On a warm August day last summer, about 20 employees were working in various bays around the yard, performing service and repairs before the decommissioning season started. Down on one dock, Walter and Kate Rush were chatting with Ratcliff. The Rushes had sailed in for some service work. They were delighted with their experience.

“I feel like when I ask questions, Will listens,” Walter said. “There were a bunch of things to do and he took care of them.”

That personal attention is rooted in the company culture, noted Weir.

“We like to know our customers, so when somebody comes in they don’t feel like they pick a number,” he said. “They feel at home and know the people who are working on their boat. I think that’s what sets us apart—the level of personal detail. And that’s how Jock has always been.” 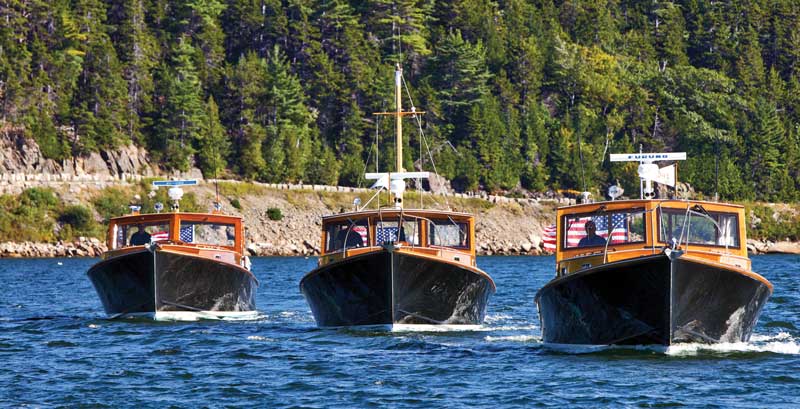 The models designed by Lyford Stanley and built by Jock Williams have attracted a devoted following for decades. Shown here are two Stanley 38s and a Stanley 36 cruising along in Somes Sound. Photo by Alison Langley

As for Williams, he’s not slowing down. With a rotating complement of friends and family, including his wife Debbie, he recently completed a 3,500-mile circumnavigation around the Northeast waterways aboard his Stanley 36, Hokulani, and envisions similar cruises in Europe.

He carries with him great pride in his company—not only its product but its ability to survive through economic downturns and retain long-time employees as a locally owned company with good pay and benefits. Williams is working with an advisory board and his management team to ensure the company’s future.

“For a little company, we have to figure out how to do things right,” he said. “But we’ve been in business 49 years. That’s not peanuts.”