Click here to view the Show 2008 image gallery.
We would like to take this opportunity to say a tremendous “Thank you!” to all the people who made the 6th annual the Maine Boats, Homes & Harbors Show, held on August 8-10, such a success. The show brings some 15,000 people to town from all over the state, New England, and beyond. It takes the efforts of many to make it happen and we are grateful to all who played a hand in its execution. The rain on Friday limited the number of visitors a bit, but it certainly did not dampen their spirits. There was a great sense of camaraderie among the rain-gear-wearing attendees—a few exhibitors reported it as their best day of the show. We all welcomed the sun over the weekend, and attendance on Saturday and Sunday proved some of the highest we have seen. This year we had more than 280 exhibitors including 70-plus boats in the water, another 50 land exhibitors and 180-plus tent exhibitors….a tremendous display of the breadth and diversity of fine, Maine-crafted products, something we all can be proud of. 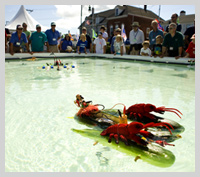 Click here to view the
Zucchini Boat Winners.
A heartfelt thank you goes to the City of Rockland, which was a terrific host to the show yet again. The Maine Boats, Homes and Harbors team is looking forward to joining the Rockland community in the spring when we move our offices to Main Street. We are excited by the opportunity to work even more closely with the city, local businesses, and organizations to help make Rockland even more of a destination than it already is. Specials thanks this year go to several organizations. The organizers and volunteers of the Rockland Lobster Festival helped make the transition between our events go incredibly smoothly. Rockland’s Harbor Master, Ed Glaser, and his team’s help on the waterfront was crucial. The West Bay Rotary once again ran the entrance gates with aplomb. Maine Built Boats co-sponsored the Friday morning press conference with us, helping introduce members of the press to Rockland and the show. 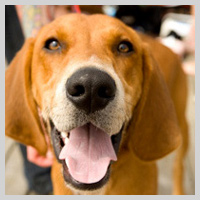 Click here to view the
Boatyard Dog® Winner, Truman.
A lot of young people are involved in the show, and they deserve special mention as well. The young adults from Youthlinks trained Truman, the World Champion Boatyard Dog® in a mere two weeks. Peter Henderson and his Babe Ruth team again did yeoman duty as trash picker-uppers extraordinaire. Young sailors from the Atlantic Challenge Community Sailing program displayed their Optimist pram sailing skills on the waterfront. We would also like to recognize our generous sponsors at this year’s show: Awlgrip sponsored the Exhibitor’s Lounge, providing beverages and tasty eats for show exhibitors. The Maine Made Café, a shaded oasis with an outdoor café atmosphere for visitors, was sponsored by DECD’s “Maine Made” marketing program for fine Maine goods and by the Maine Office of Tourism. Last, but certainly not least, we’d like to thank the 250-plus show exhibitors and their crews, and ALL the local community members and visitors who welcomed them and 10,000-plus show attendees to Rockland. Many visitors from afar make the show a destination each summer because they find such a warm welcome here. Many thanks again for everyone’s continued support; we look forward to staying in touch as we get ready for another great show in 2009. Best, John K. Hanson, Mary Carey, Leila Murphy and the MBH&H crew
Click here for more information about the Maine Boats, Homes & Harbors Show