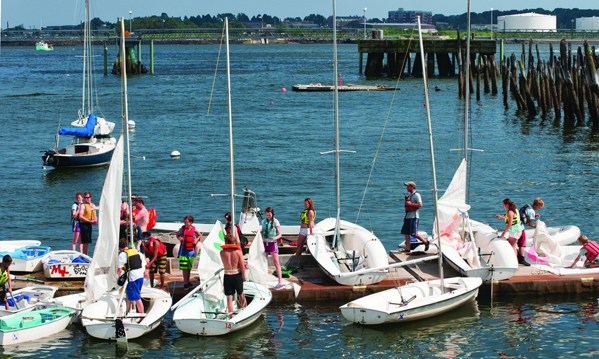 Located on a piece of city-owned land near Portland Yacht Services, SailMaine offers a wide-range of sailing programs, including those for high school teams, special needs classes, boat rentals, and both beginning and advanced classes for adults and juniors. Photograph by Richard Sawyer
By Polly Saltonstall Those watching the recent America’s Cup races in San Francisco might have wondered where were the Americans? While team Oracle was the U.S. defender of record, only one person out of 11 sailors on the behemoth catamaran actually came from the United States. That could change in future years, though, as fast-growing community sailing programs in Maine continue to broaden the appeal of the sport, filling harbors along the coast with eager young sailors in the spring and the fall, as well as the traditional summer boating months. For years private yacht clubs were among the only places youngsters could take sailing classes, and then only in the summer. Community-based programs, such as SailMaine in Portland, MDI Community Sailing Center, and Rockland Community Sailing have extended the season and reached out to a wider audience, as well as hosting a growing number of high school sailing teams. Other towns with community sailing programs include St. George, Belfast, Boothbay, Blue Hill, and Lincolnville. Southwest Harbor resident Ted Welles planted the roots for the MDI program in the 1980s when he acquired some Cape Cod Bull’s-eyes, hired a few teenage instructors and started what he called The Boating School. A few years later he bought a dozen used Fireflies from St. George’s School in Newport, Rhode Island, and started the state’s first high school racing program at MDI High School. Since then close to 20 high schools in the state have begun offering sailing as a sport, many in conjunction with local community programs. 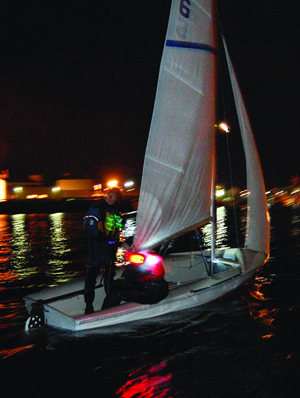 Night sails during the fall full moon have become an annual tradition at Rockland Community Sailing. The night practice consists of an on-the-water version of capture the flag. Racers adorn their boats with glow sticks, flashing lights, and other illuminated decorations. Photograph by Michael O’Neil
The MDI sailing program was formalized in 1996 by local sailor Glenn Squires who learned about the concept of community sailing at a U.S. Sailing symposium in Newport. MDI Community Sailing Center has seen the number of youngsters in its program grow from 25 in 1996 to more than 200 today. Many of them now sail seven months of the year, donning dry suits and wool hats to brave Maine’s late-fall chill, said Squires, who still runs the program. “Community access is huge for the sport,” he said. MDI Sailing also offers classes for adults, and makes dinghies available for adults to sail on their own. Rockland Community Sailing began in 1998 and moved to the Apprenticeshop in 2001 when that organization built a new dock, said K.C. Heyniger, director of waterfront programs at the Apprenticeshop. He has watched the number of sailors in the program since then grow to 238 youngsters and 35 adults in 2013. The season has expanded from eight weeks to 25 weeks. In addition, Rockland Community Sailing has expanded to include two high school racing teams and a conglomerate team that includes students who homeschool or are not part of a participating school district. Many of these youngsters are first-time sailors in their families; others could not afford to sail any other way. “The water doesn’t care who you are, where you are from, or how much money you have,” said Heyniger. “It’s a great equalizer.” Rockland Sailing is working to attract more adult sailors, people who say “why didn’t I do this years ago.” Heyniger also would like to offer adaptive sailing classes for people who might not otherwise be able to go boating. “Our goal is to be Rockland’s backyard sailing program,” he said. In Portland, SailMaine began in 1996, but took off as an organization in 2004 when the city of Portland let the group use a quarter-acre lot on the waterfront next to Portland Yacht Services. The organization has a fleet of twelve J-22s, which are used for racing, over three dozen 420s, three dozen pram dinghies, and a couple of Sea Sprites. SailMaine hosts six high school teams and last season taught sailing to 700 youngsters and adults. The high visibility of the waterfront where SailMaine boats mingle with passing tugs, tankers, and pleasure boats, has been a huge draw, said executive director Janet Acker. SailMaine, like the other programs, offers scholarships. “We don’t want the cost of the sport to prohibit people from getting on the water,” she said. Back in the late 1800s, a couple dozen fishermen from Deer Isle crewed on two successful America’s Cup defenses. They were recruited after New York Yacht Club members cruising in the area saw them sailing home with their catches and were impressed by their boat-handling skills. It could happen again. Only this time the sailors in Maine’s harbors are not hauling fish; they are tearing around in 420s, J-22s, and other fast fiberglass dinghies. Catch them if you can. MBH&H Editor in Chief Polly Saltonstall taught sailing during high school and college. For More Information: MDI Community Sailing Center PO Box 116, Southwest Harbor, ME 04679 207-244-7905; www.mdisailing.org Rockland Community Sailing The Apprenticeshop, 643 Main St. Rockland, ME 04841 207-594-1800; www.apprenticeshop.org SailMaine 58 Fore St., Portland, ME 04101 207-772-7245; www.sailmaine.org Slide show: Community Sailing programs are active all along the coast in harbors of all flavors, from Mount Desert Island to Rockland, and down to Portland. MDI – Photos courtesy MDI Community Sailing Center Portland – Photos by Richard Sawyer courtesy SailMaine Rockland – Photos by Michael O’Neil courtesy Rockland Community Sailing