Going to seed seems to be the main job for the trees of the wood and the flowers of the field these September days. While we are enjoying the crop of local sweet corn, our cousin the black bear is enjoying the crop of acorns and beechnuts now maturing and dropping from the trees. This high-protein and high-fat food is just what she needs to get her through the long sleep ahead, especially if she gives birth during hibernation, as black bears do. More annoying are the burrs, which are the seeds of several kinds of plants found around here. Burdock can grow four or five feet high, and is covered with round spiny seeds that are a royal pain if they get stuck to your wool sweater, or your socks, or your big shaggy dog. Burdock is a perennial that grows from a large edible tuber called “gobo” in Japan. Edible or not, most of us would not be heartbroken if we never saw another burdock.

The family of ruby-throated hummingbirds that has been coming to our feeder since May has been gradually shrinking from four flittering flyers until now it appears we are down to one or two as they leave on their fall migrations. This year we have gotten to know these little creatures better than ever. We’ve listened to their quiet chirping as they hover around the feeder like Tinker Bell. We’ve watched them chasing each other frantically and then resting on the clothesline. We’ve been buzzed by them while walking in the garden or hanging out the wash. They are endlessly fascinating and keep coming back day after day so that they feel like family.

We humans are hugely impressed by our own prowess. But what about this tiny creature hardly bigger than your thumb—able to fly to Central America fueled by nothing but sugar water and a few bugs, winter over there, and then fly back to the very same Maine garden where they were last year? They fly solo, too, so those young ones born here this season will have to find their way to the wintering grounds on their own, never having been there before. Amazing! Godspeed, little ones!

We have escaped a frost so far (knock wood) and the produce is still coming despite the drought. Maple trees show some color and late-season wildflowers brighten up the fields and roadsides, including tiny white asters and “butter and eggs” (Linaria vulgaris), also called toadflax. These beautiful orange and yellow flowers rise on a single stem and give a touch of the exotic to a dusty roadside. They look lovely in a vase, too—like snapdragons. Reputable sources declare that this plant can be used as a remedy for jaundice, dropsy, and enteritis. I don’t know what dropsy is, but it sounds horrible—maybe I’d better gather some toadflax while walking this week.

Bees, butterflies, and other pollinators count on this last showing of wildflowers to top off their summer’s feast and strengthen the next generation.

Mowing fields while they are still in bloom may be convenient for the mower, but it is an abrupt deprivation for many wild creatures who also merit consideration. After all, whose fields are they, really? Frosts will come more often now and gradually put the fields and farms and gardens to sleep.

We have witnessed that recreational boating is more popular as a result of pandemic protocols—no crowds, lots of fresh air. Those shifts have lasted and that has got to be good news for the state of Maine, which has some of the finest waters anywhere for sailing, paddling, or motoring. Canoes and kayaks in particular seem to be everywhere these days, small personal craft modeled after those built by the First Americans. There are few sensations to compare with being seated easily on the water like an aquatic bird and able to move along nicely with just a few strokes of the paddle. There is a feeling of oneness with the water and the sky not so easily gained anywhere else. There is also the feeling of profound terror that can come quickly upon you if the wind picks up too fast or a whale comes within a few feet of you. It’s a primal experience out there where the sea and the sky meld together. 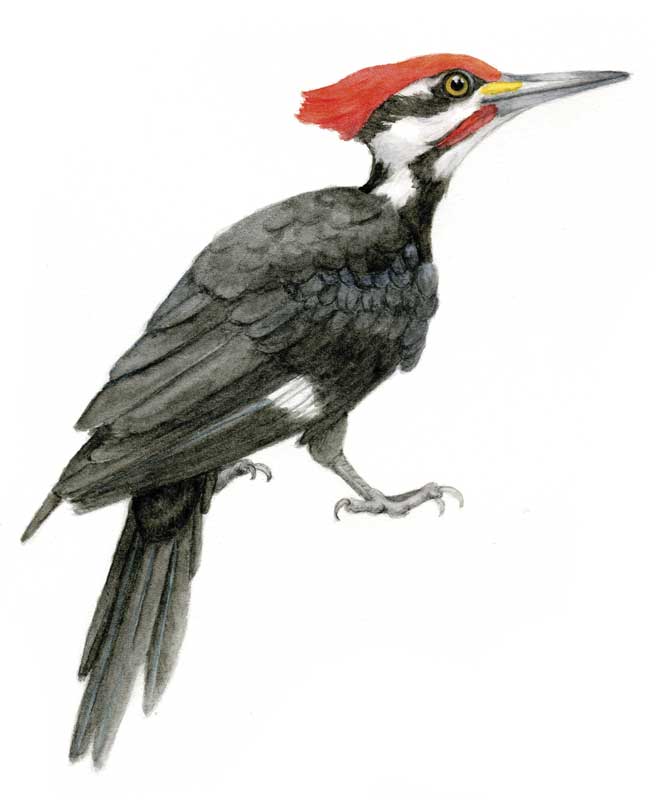 There is a life-pair of pileated woodpeckers in our neighborhood. Their call echoes through the trees, and, some say, inspired Mel Blanc’s voice of Woody Woodpecker. These are large birds, crow size, black and white with a bright red crest, and a dipping flight like other woodpeckers. They seem to swim through the air. They never sit still—very nervous, always moving—too much to do, I guess. Once I managed to sneak
up on one who was chiseling away on the far side of a tree and couldn’t see me. Well, you should have seen those woodchips fly! Some of the chips were four or five inches long and an inch wide. Nervous as always, Woody would strike the tree several times, then stop and look all around for danger, then strike some more.

As a rule, they attack only dead wood because that’s where their meal is; mostly carpenter ants and bark beetles. Don’t feel bad about the tree; they may actually be helping it. The holes that Woody makes provide homes for many other birds and small mammals, so they are the house carpenters of the forest. There was a time when the pileated woodpecker teetered on the brink of oblivion due to the destructive effects of DDT, but they have made a great comeback. I remember first seeing them near the Old Rifle Range woods in West Concord, Massachusetts. Being familiar with the much smaller hairy and downy woodpeckers, I was stunned by this intense flying dinosaur. If you want to see more of this magnificent creature, woodman, spare that dead tree.

We watch summer saunter off the stage with some sadness, but not for long as there are the fall chores ahead. We had a couple of early frosts this past week out our way. As rugged as pumpkins and winter squashes are, their vines are not so tough and will soon wilt and fade with the cold, but not before delivering a last stroke of vibrant color to their fruits. Apples, too, seem to be nicely finished by a few frosts, brighter and sweeter than before. It’s all pumpkin patches and squashes, Indian corn, corn mazes, and apple cider as city folks go out to the country for the day answering that primal urge to bring home some of the harvest.

If you have plans to transplant trees, shrubs, or perennials, these warm days are a good time to do it, but you might want to give them a drink and a good blanket of mulch. It’s also a good time to spread a little lime and fertilizer in the garden, and if you have time, tuck it into bed with a blanket of seaweed. On warm afternoons ladybugs swarm the west side of the house and hornets bump along looking for a hidey-hole.

Harbor seals seem to be having some good years along the Maine coast as numbers continue to increase. If you are out paddling you may hear a snort or even a loud slap behind you. This would be a harbor seal warning you away from his fishing grounds. The seal pod may assign a scout to follow you around. If you want to get a closer look, try paddling backwards and watch the scout pop up in your wake. A few harbor seals stay through the winter but most migrate farther south. The North Atlantic right whale does the same. Migrate, that is. Fortunately, they don’t sneak up behind you and slap the water. Both seals and right whales mate during the warm season, gestate in their winter waters, and give birth in the spring. We hope next year brings several new calves to the right whales as, unlike the seals, their population is sorely endangered.

If you are not a fisherman, a farmer, or a tradesman, summer may be a time of leisure for you. Work schedules slack off, projects go on hold. But then fall comes along and there is a lot of catching up to do. That is the reason chimney sweeps and firewood dealers are so busy right now. We tend to put these things off until the frosts start coming. Your commentator did some professional chimney sweeping many years ago. Few escapades can match the excitement of walking along the ridgeline of grand old Victorian house on a beautiful fall day to send a brush down the chimney.

It can be messy work, though. I still remember one job that involved cleaning a fireplace in an all-white living room: white shag rug, white walls, white furniture, even the fireplace was white. I somehow managed to avoid embarrassment on that job, but then there was the time I got to the top of a 10-foot-high chimney above a steep slate roof on a towering Tudor revival mansion and froze from fear; couldn’t move. I called down the chimney to my partner, “Call the fire department!” He called back, “We can’t; they recommended us for this job!” Fortunately, my partner was a patient man and managed to talk me down from the heights or I’d still be up there.

Beneath white pines the ground is covered with their rusty needles, which give off the most beguiling perfume when the October sun hits them. Fall apples are coming in now by the bushel and it’s hot apple cider and pumpkin pie for the hunter home from the hill. Some days it seems as though everything is holding its breath. Fall crawls along with most of the leaves fallen and flowers going to seed but the grass is still green. Fishermen are hauling out their boats, but there are still plenty of pleasure boats in the water. It seems as though the whole world is waiting for the next scene or season to begin.

From Rachel Carson: “Those who contemplate the beauties of the earth find reserves of strength that will endure as long as life lasts. There is something infinitely healing in the repeated refrains of nature—the assurance that dawn comes after night, and spring after winter.”

Rob McCall lives and writes in Brooklin, Maine. This almanack is excerpted from his radio show on WERU FM, which can be streamed on weru.org.